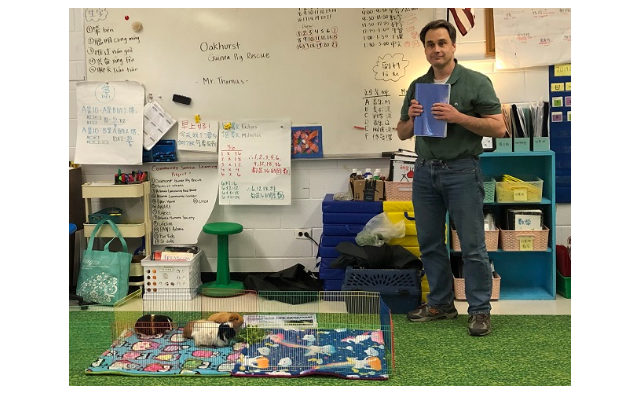 Thomas Pederson opened Oakhurst Guinea Pig Rescue in 2015 with the goals of finding homes for the animals and providing education to potential adopters which includes giving presentations at local schools. Photo submitted by Thomas Pederson.
Share

Decatur, GA – Thomas Pederson and his wife decided on a whim to get a guinea pig about 12 years ago and had no idea what they were getting into. They did everything wrong at first and didn’t know how much they would grow to love the little animal.

Shortly after getting their first guinea pig, the couple reached out to a guinea pig rescue in Marietta to begin volunteering to care for the older and sicker animals.

“I’ve never been much of an animal person but we just really liked them a lot, especially when we got the older ones and the sicker ones and started taking care of them we just really enjoyed it,” Pederson said.

He always had the thought in the back of his mind about opening a rescue but didn’t want to compete with the Marietta organization. The opportunity came his way in 2015 when the existing center closed and he opened Oakhurst Guinea Pig Rescue as a licensed non-profit organization.

To surrender a guinea pig, people need to contact Oakhurst Guinea Pig Rescue through their Facebook page or website and Pederson will send a surrender package that can be filled out online. The individual will then go on a waiting list.

“If we have space they can bring them in right away but sometimes we have to find a new foster family to take care of them,” Pederson said. The rescue organization does not encourage people to show up or drop off guinea pigs without first contacting them as the guinea pigs will need to be placed with foster families since the rescue does not have a brick and mortar shelter.

“We pretty much adopt everyone out unless it’s medical,” Pederson said, adding that sometimes the pets will be adopted by somebody involved with the rescue.

The adoption process is somewhat similar to the surrender process. Those interested in adopting should contact the rescue and then they will be asked to read a book or watch a YouTube video called “Guinea Pig 101.” After that, they take an online test to receive a certificate and can proceed to fill out the adoption application.

“We always adopt in pairs because they’re social animals and they need to have a buddy,” Pederson said. “Once we (look into it) then we’ll have a meet and greet and we’ll have the fosters bring the pigs they might be interested in and just let them interact with them and see how they like them and hopefully adopt.”

The process has many steps in order to ensure potential adopters have some knowledge about guinea pigs, understand how to take care of them and know the commitment level guinea pigs require.

“To us, when my wife and I started it, we wanted to make a difference and not just be kind of a clear-the-shelter thing where we just whip them out as fast as we get them in. We want to make sure that they go to the best homes possible,” Pederson said. “We’ve set up some cage requirements and we won’t bend on them. You have to have the correct size cage. We actually lose a lot of adoptions just because of our process, I think, but in a way, we feel like we’ve done a service though because sometimes people think it might be too much to go in. We’re just really honest with everyone about it.”

Oakhurst Guinea Pig Rescue did shut down in the spring due to the coronavirus pandemic and at the time only accepted emergency situations.

“We shut down in the spring but then as things reopened we had a protocol where we do the meet and greets outdoors, we try to maintain a six-foot distance from everyone as much as we can, we require everyone to wear masks, we have hand gel on-site,” Pederson said.

Education was part of Pederson’s motivation for opening Oakhurst Guinea Pig Rescue, especially given his experience of getting his first guinea pig.

“I think our biggest thing is that we want to try to educate people because most people want to do the right thing and they just don’t know. I mean, that’s how we were so we just want to be that information,” he said.

Pederson, his wife, and all of the volunteers are trying to provide a good environment and homes for the guinea pigs.

“We really wanted to do it right even though they’re little guys,” Pederson said. “That’s what we’re really proud of because not many people do that for the really small animals.”