DeKalb County, GA — The Coalition for a Safe DCSD Return held a Zoom meeting on Dec. 20 in response to the announcement made at a virtual town hall on Dec. 14 that the Dekalb County School District would return to in-person learning in January.

Schools in the Atlanta area have been virtual since March due to the COVID-19 pandemic. Some schools, like Fulton County Schools, have returned to in-person learning as have many private schools. The reopenings in Fulton County haven’t been without issue, and the superintendent of that district recently announced that all high schools would return to remote learning due to a spike in cases, according to Reporter Newspapers. At least one local private school also has experienced a significant outbreak of the virus.

DeKalb County Schools employees are to return beginning Jan. 4, while K-2, 6th, and 9th grades would return two days a week Jan. 19. The remaining grades would begin to return two days a week on Jan. 25. To reopen, the school district is changing its metric from cases per 100,000 residents to the COVID-19 positivity rate, according to the Atlanta Journal Constitution. Return is predicated on a positivity rate of less than 10% of COVID-19 tests in the community, according to reporting by the Atlanta Journal Constitution. Previously, the school district said it would reopen when cases reached 100 per 100,000 people or less for 14-days. As COVID-19 cases spiked, it became clear that it would be a long time before cases fell to 100 per 100,000 people. Currently, the number of cases per 100,000 people in DeKalb is 506. The positivity rate is inching back up as well and now stands at 10.3 percent.

The AJC’s reporting concerning the positivity-rate threshold for returning to in-person learning hasn’t been confirmed in the plans officially released by the district, however. Some teachers and parents say they are being told the plans are moving forward regardless of the positivity rate.

Decaturish has asked the school district to clarify this point, but the district did not immediately respond.

A presentation given to a school district employee appears to support the AJC’s reporting on this. The employee shared the following slide from that presentation: 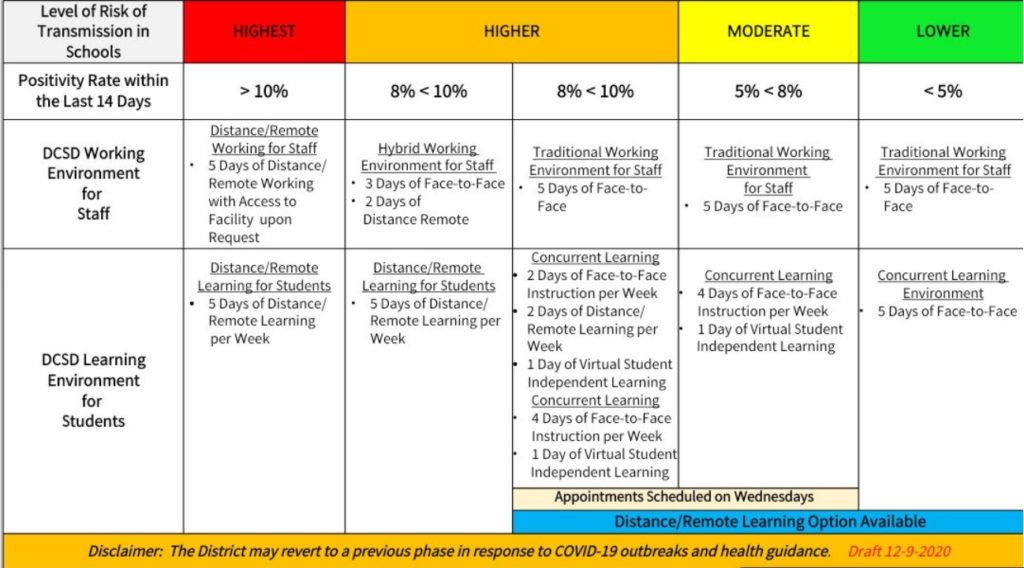 A “concurrent learning” hybrid schedule of two days a week will be used initially and when the positivity rate is between 8% and 10%, while a four day a week schedule will be phased in.

The Dec. 20 Zoom meeting was attended by Deborah Jones who is the president of the Organization of DeKalb Educators, along with a number of DCSD teachers, parents, and representatives from the International Workers of the World, an organization that supported a successful protest by DCSD bus drivers in 2018.

Jones expressed concerns about the surge of infections that followed Thanksgiving, the probability of another surge in early January, and the safety of some DCSD buildings which have poor ventilation.

Several participants expressed alarm at the apparent suddenness of the decision and the lack of clear communication with teachers.

“Teachers found out after parents found out,” said Lisa Baker, a parent of a 3rd grader and a 7th grader.

“The town hall was how we found out that all of a sudden the county had switched gears,” said Baker, who also said that she had been given mixed messages about the return to school preference form that parents were supposed to fill out. Answers to her questions about what a return would look like had not been forthcoming or were frustratingly vague.

Baker, who is a student in a nursing program, stated flatly that a return to face-to-face schooling during the current surge in cases was not safe.

“There’s no public health model under which this makes sense,” said Baker.

Trin Intra, the parent of a 3rd grader and a 6th grader in the district, said, “This is the worst time to reopen schools when community spread is so high and predicted to increase further from the holidays. Yes, children need to return to school and yes, some schools may be better equipped with more resources such as plexiglass partitions for all, but DeKalb County is such a large county and there is so much disparity that it is just not safe to reopen now.”

Dr. Cassandra White, a medical anthropologist at Georgia State University who is also the parent of an 8th grader at Druid Hills High School, said, “There is no doubt that a return to in-person learning in January, or any time before a significant number of our population has vaccine access, will result in deaths and serious illness among teachers, staff, school families, and in the wider community.”

Several participants expressed concern that teachers were expected to eat lunch with their students, that there was no clarity about whether teachers would be expected to use their own sick days if they had to quarantine, and that those with children would have to find child care with little notice at the height of a pandemic. Several teachers who chose to remain anonymous expressed fear of retaliation if they expressed their opposition openly.

Organization of DeKalb Educators plans to hold a masked, socially distant protest on Tuesday, December 22 at 10 am outside of DCSD offices at 1701 Mountain Industrial Blvd. in Stone Mountain.

DeKalb County isn’t the only local school district wrestling with a plan to resume in-person learning. City Schools of Decatur plans to bring Pre-K through 5th grade back on hybrid schedule starting Jan. 19.