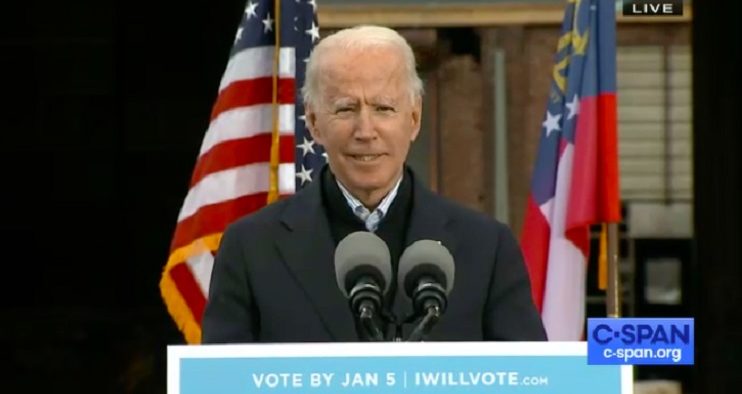 Joe Biden during a rally for Democratic U.S. Senate candidates Jon Ossoff and Raphael Warnock on Tuesday, Dec. 15, at Pullman Yard in Kirkwood. Photo is a screenshot from the C-SPAN live stream.
Share

Decaturish requested credentials for this event but was denied in-person access. A spokesperson for Biden’s transition team cited COVID-19 restrictions. Decaturish covered the event by viewing a live stream on C-SPAN.

The candidates talked about health, jobs and justice, the focus of the candidates’ new joint campaign effort.

Ossoff’s message to voters was simple today, stating that polls are open and it is time to vote.

“It is time to vote like we have never voted before Georgia. See for the first time in four years we’re feeling hope in our hearts,” Ossoff said. “It’s Georgia voters who have the power to write the next chapter in American history and Georgia voters are standing up for health, jobs and justice for the people.”

Ossoff, Warnock and Biden discussed the coronavirus pandemic and mentioned that the U.S. has surpassed 300,000 COVID-19 deaths.

“My heart really goes out to all of you who’ve lost a loved one, who’ve gotten sick, who are suffering from the disease. Yet this in this darkness, we finally got some good news with the vaccine approval. Still, it’s gonna take time and money to scale up the manufacturing, distribution, and the element injection of the vaccine,” Biden said.

Ossoff, again, criticized Sen. David Perdue, his opponent in the race, for saying COVID-19 was no deadlier than the flu and for buying stock shares in manufacturers of vaccines and medical equipment.

“Our lives have been torn apart. Millions have lost jobs and homes and livelihoods and business. We need to empower Georgia’s Centers for Disease Control and doctors and scientists across this country to beat this virus, get our daily lives back and save lives, and Georgia has the power to do that,” Ossoff said.

Biden said he plans to get to work right away once he takes office and he needs two senators who are going to help him. He also chastised the Senate for not passing an additional coronavirus relief package.

“States like Georgia need help to keep firefighters, cops, first responders, educators on the job. We need immediate funding for testing and vaccine distribution. (We) need to get money into people’s pockets right away,” Biden said.

Ossoff in particular has been outspoken about passing another round of $1,200 stimulus checks and wants to pass an infrastructure, jobs and clean energy program as well.

Warnock and Ossoff both said they want to strengthen the Affordable Care Act and both believe health care is a human right.

“We’ve got to get this virus under control. We’ve got to distribute this vaccine safely and efficiently,” Warnock said. “We’ve got to make sure that people with pre-existing conditions are never denied coverage, because health care is a human right and it is certainly something the richest nation on the planet can and ought to provide to all of its citizens.”

“Omar Jimenez, a member of my congregation, was arrested on live television while reporting for CNN. The badge he was wearing was not as significant as the skin he was wearing,” Warnock said.

“So, anybody who’s looking at this fairly knows that we have to have criminal justice reform. We have to stand by law enforcement and we also have to hold people accountable. Because the covenant we have with one another is equal protection under the law. That’s what it means to be American,” he added.

Overall, all the speakers encouraged voters to get out and vote either early or on election day telling them to vote like their lives depend on it.

The early voting period has begun and goes through Dec. 31. Election day is Jan. 5. Absentee ballots can be put in drop boxes between now and Jan. 5, Decaturish previously reported.

“Jon Ossoff. Raphael Warnock. They’re ready to represent Georgia. They’ll actually fight for you, represent you, stand up for you,” Biden said.

“You’ve got to vote in record numbers again because yes, the lives of every Georgian still depend on what you’re doing. Yes, you still need to vote as if your life depends on it, because it does,” he added.

He closed with a quote from the late Congressman John Lewis from 1965 when he fought to pass the Voting Rights Act.

“The vote is precious. It is the most powerful non-violent tool we have in a democratic society, and we must use it. And so you must go out all across America and tell young people, and people not so young, tell all of us: Vote. The vote is powerful,” Lewis said according to HuffPost.

“So let’s choose hope over fear, unity over division, science over fiction, and yes, truth over lies,” Biden said in closing. “It’s time to stand up, take back our democracy. Send me these two men, and we will control the Senate and we will change the lives of people in Georgia.”