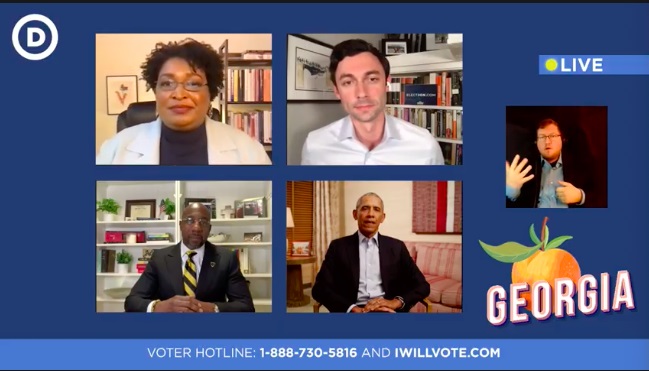 Atlanta, GA – The Georgia Democrats hosted a virtual get out the vote rally through a YouTube livestream on Friday, Dec. 4, to encourage voters to support Democratic U.S. Senate candidates Jon Ossoff and the Rev. Raphael Warnock.

The rally, which included speakers Congresswoman-elect Nikema Williams, Atlanta Mayor Keisha Lance Bottoms and Stacey Abrams, focused on the stakes of the Senate runoff races and maintaining the momentum to keep Georgia blue.

Abrams, and others, discussed the importance of winning the U.S. Senate seats as the two Georgia races will determine the balance of the Senate. Former President Barack Obama, another speaker at the event, emphasized the significance of the congressional chamber.

“You are now, once again, the center of our civic universe because the special election in Georgia is going to determine ultimately the course of the Biden presidency and whether Joe Biden and Kamala Harris can deliver legislatively all the commitments they’ve made,” Obama said.

During Obama’s presidency, he struggled in Congress even with a Democratic majority in the Senate during the beginning of his first term. The way the Senate is set up allows senators to block legislation.

“If you don’t have a majority, if the Senate is controlled by Republicans who are interested in obstruction and gridlock, rather than progress and helping people, they can block just about anything,” Obama said.

Obama’s first two years as president were productive as he was able to get legislation passed but he said that slowed down when Mitch McConnell became the Senate majority leader.

The battle isn’t over in Georgia, Warnock said.

“We’ve got a race in front of us and we intend to win and we need all Georgians to recognize this deciding moment, this inflection point in our country and Georgia is at the center of that inflection point,” he added.

Ossoff reminded voters that Georgia represents the hope of the nation as the state is a clarification of where the South is and where the state is at with having a young, Jewish, son of an immigrant running alongside a black preacher who holds the Rev. Dr. Martin Luther King, Jr.’s pulpit, he said.

“If you’re wondering what you have been feeling in your heart, these last four weeks, maybe an unfamiliar feeling that you haven’t felt in a while, that is called hope. It reminds us of what we felt 12 years ago, when Barack Obama ran for president at a time of war, recession and financial crisis, and put hope in our hearts,” Ossoff said.

Ossoff also encouraged people to make a voting plan, especially young voters as a surge in youth turnout pushed Ossoff and Warnock into runoffs as they hope to unseat incumbent Senators David Perdue and Kelly Loeffler, according to the Atlanta Journal-Constitution.

“Vote for health and jobs and justice, both to get us out of this crisis. We can pass a new Civil Rights Act. We can make sure that everybody has the health care they need. We can protect our environment. The future is limitless but we’ve got to win these races, it’s going to come down to youth turnout. So I’m calling on young people in Georgia to make a plan to vote,” Ossoff said.

Warnock encouraged young people who will be 18 by Jan. 5, to register to vote and reminded those listening that the deadline to register is Dec. 7. He also pushed voters to make sure their friends and family go to the polls or fill out an absentee ballot.

Additionally, Warnock asked faith leaders to spread the word about voting as it’s a nonpartisan issue and can be preached about from pulpits.

“I believe that a vote is a kind of prayer for the kind of world that we want to live in,” Warnock said.  “If you’re sitting in someone’s temple, church, mosque virtually these days, reach out to the leader of that congregation and make sure that we get the word out through all of these networks.”

Voting is an expression that shows what each of us does matters, Obama said as he energized voters.

“Believe in your own power,” he said. “The premise of our nation is all people have a voice. All people have power in a government of, by, and for the people.”