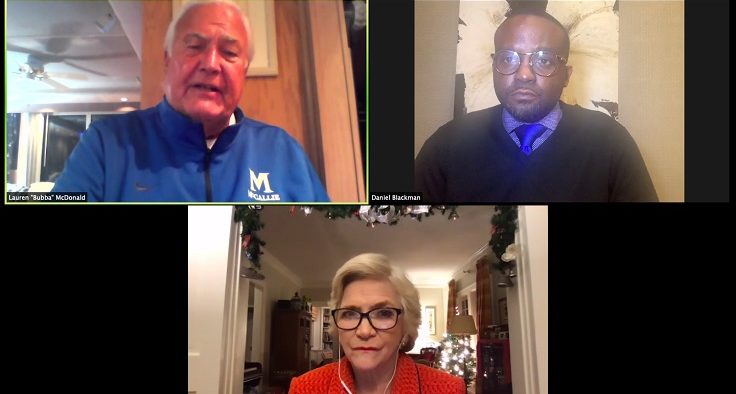 Sally Sears of CBS 46 (bottom) moderated a forum between the Public Service Commission candidates: incumbent Commissioner Lauren "Bubba" McDonald (top left) and Democratice candidate Daniel Blackman (top right). The forum was hosted by the League of Women Voters of Georgia over Zoom. Photo is a screenshot of the Zoom webinar.
Share

Atlanta, GA – The League of Women Voters of Georgia hosted a candidate forum on Thursday, Dec.17, to ask questions of the candidates for the state’s Public Service Commission.

The runoff election, which will feature two candidates for U.S. Senate, will be held on Jan. 5. Early voting began on Dec. 14.

The Public Service Commission is a five-member board that regulates the state’s utilities, including electricity, natural gas and telephone service.

The PSC also approves the rates and fees Georgia Power charges and how the company produces electricity, according to The Augusta Chronicle.

Sears started questioning the candidates by asking each candidate who they are and why they want to serve on the PSC.

Incumbent Commissioner Lauren “Bubba” McDonald owns a funeral home and also served in the General Assembly for 20 years. He has served on the PSC on and off since 1998 when he was appointed to fill an unexpired term. He first left in 2002 and returned in 2008 and has been on the commission since he said.

“I’ve got to finish the project,” McDonald said. “We are the seventh-best state in the nation to do business with. One of those criteria to do that is that we have low energy costs and we have very good reliability for energy. We have a very diversified generation plant in our state from coal to combined-cycle natural gas, the solar energy  — which I was the godfather of solar energy in Georgia — and then we also have two new nuclear plants.”

Democratic candidate Daniel Blackman has a background in energy policy. During President Barack Obama’s tenure, Blackman worked with the U.S. Environmental Protection Agency and the Department of Energy to expand environmental protections, support low and moderate-income families, and deal with climate change, he said.

“I don’t think we have the luxury when those of us who are called to service to sit on the bench when there are so many challenges. I think that right now what COVID-19 has shown us is how unprepared we are in so many areas,” Blackman said. “As someone that believes in the science that exists that talks about climate mitigation and someone that believes in the expansion of renewable energies, I think we need to support technology and infrastructure that gives Georgians a more viable future.”

The candidates discussed various topics related to energy and utilities throughout the forum, including climate change, fracking and natural gas.

Climate change is bigger than just Georgia, McDonald said as he dicussed producing clean energy in the state.

“We are in the process of decommissioning several coal plants across the state. We’re in the process of relocation of some of the coal ash ponds,” he said. “We could be better having renewable energy with solar that we have and enjoy. We were moving with biomass, and of course, hopefully in November of 2021, we will have unit three of the nuclear plant online.”

Blackman said that science shows that Georgia has been experiencing more extreme weather and pointed to the two recent hurricanes. He added that Georgia is at the center, in many cases, of the climate impact.

Blackman also said that he has some issues with fracking due to environmental challenges but overall thinks there needs to be a better approach to the state’s energy mix.

According to McDonald, fracking has lowered the cost of natural gas and changed the locations of pipelines which he added is great for the state and is supportive of it.

“I don’t support the Green New Deal that’s out there that would be very, very devastating to the energy policy of this great nation,” McDonald said. “My philosophy as a regulator, the least regulation is the best regulation and I try to work through that with the business community. And when I think Georgia Power was out of kilter, I go right head to head with them. I am a very independent voice on the Georgia Public Service Commission.”

This year the General Assembly passed a broadband bill and charged the PSC with developing the pole attachment rates, McDonald said, adding that the project was finished this week.

“We’re working like we did, we passed the act I charged on the pole attachments and that’s going to open up the opportunity in the rural areas where they don’t have it for expansion of broadband, which is very, very much needed,” McDonald said.

Blackman sees a couple of challenges to that and said that when the PSC authorized the Electric Membership Corporations to charge the bid the rate of telecom and cable increased.

“When you look at the fees on the existing coverage areas, I think that we’re still going to see local residents that are going to bear some kind of impact. I think we need to rethink that. We need to drive more public and private investment,” Blackman said.

He added that if the commission knows there’s a problem they should work to fix it, to drive investment, to encourage telecom organizations to expand broadband.

“We have to make it a priority. It should not have taken a pandemic for us to understand the realities that too many of our counties have been left behind because of a lack of investment and a lack of leadership,” Blackman said.

The Public Service Commission race will be on the ballot on Jan. 5 along with the two U.S. Senate runoff races. Early voting is currently happening until Dec. 31 and the last day to turn in absentee ballots is Jan. 5. For more information about early voting in DeKalb County, click here.