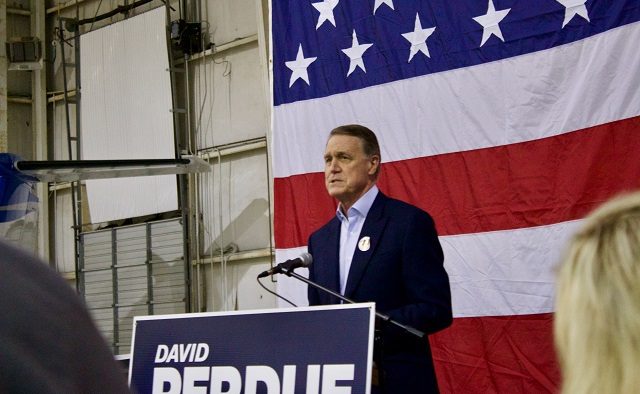 Incumbent Republican Sen. David Perdue hosted a rally on Monday, Dec. 14, at Peachtree DeKalb Airport ahead of the Jan. 5 runoff election. He is defending his seat in a race against Democractic candidate Jon Ossoff. Photo by Zoe Seiler.
Share

The senator, his cousin and his campaign chairman rallied supporters and encouraged them to vote early, as Monday kicked off the early voting period, to “Win Georgia. Save America,” as one of his campaign slogans goes.

Sonny Perdue, who currently serves as the U.S. Agriculture Secretary,  said he would show his support of Sen. Perdue even if they weren’t related because Washington hasn’t changed Sen. Perdue and he still has Georgia values, he said.

“He still stands strong with conviction, with integrity. In fact, I’ve seen him stand strong against his leadership when it wasn’t in the best interest of Georgia values. And that’s the kind of senator we want right, and understand that you’re going to represent Georgia, and not Washington politicians that way,” Sonny Perdue said.

He added that this runoff election is the most important election in the United States in his lifetime.

“I think it’s a shame that in November the people looked past all the accomplishments of the Trump administration and chose to vote against his personality and the way he communicates rather than on the things he’s done,” Sonny Perdue said.

Sen. Perdue has become a close ally and confidant to President Donald Trump which Sonny Perdue said has kept Republicans in line, created a great economy, lowered unemployment and provided opportunities for people to succeed.

As Sen. Perdue took the stage, supporters held up signs and chanted “got my vote.” He also reminded voters about the stakes and the importance of this election.

“We’re the last line of defense. The eyes of America are on us. They’re on you. They’re on me,” Sen. Perdue said.

He also criticized Senate Democratic Leader Chuck Schumer for saying “Now we take Georgia, then we change America” as well as Representative Alexandria Ocasio-Cortez for saying she would help Democratic Senate candidates in races “so we don’t have to negotiate in that manner.”

Clips of these quotes have been featured in ads for Sen. Perdue.

“AOC said we’ve got to have those two Senate seats in Georgia. We don’t want to negotiate anymore. Are you kidding me? That’s what America has always been about. We have a balanced government,” Sen. Perdue said.

He added that this is the moment of truth and said Republicans know what the Democrats want and said Democrats want to pack the Supreme Court, abolish the Electoral College, defund the police, pass the Green New Deal, take away private health insurance and cut military spending.

“We’re not going to let that happen. We’re going to stand up to this onslaught that would perpetuate a socialist agenda right here in Georgia. With your help, we can do this. I want to remind you that you have a responsibility. Voting is not just a right, it’s a responsibility,” Sen. Perdue said.

Sen. Perude is running against Democratic candidate Jon Ossoff in the runoff election.

Ossoff has not publicly said he supports defunding the police and has instead advocated for criminal justice reform and the passage of a new Civil Rights Act.

“We need to rebuild trust between communities and law enforcement with a demilitarization of policing. Instead, [we need to invest] in community policing,” Ossoff told Atlanta Magazine. “We need national standards for the use of force. We need to reform America’s drug laws so that we understand addiction and drug abuse as public health problems, not criminal justice issues. We need to ban private prisons. I think it is shameful to profit from incarceration, and we need to raise the standards within American prisons to humane standards with prison reform.”

In that same interview, Ossoff also said he does not believe the court should be expanded simply due to a dislike of a potential new justice’s policy positions adding that “is a prudent exercise of the authority that congress has to undertake judicial reform.”

Ossoff’s health care plan focuses on access and affordability and vows to protect private and employer-based insurance for those who prefer those options, according to an Ossoff campaign press release.

Throughout the campaign, Ossoff has advocated for cracking down on the cost of insurance, expanding Medicaid, strengthening the Affordable Care Act and creating a public option that is affordable and accessible.

Early voting for this election has begun and election day is Jan. 5.