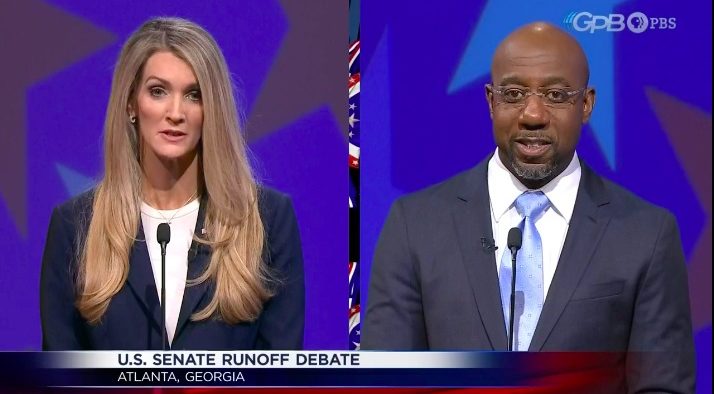 The two candidates are vying for the seat that Loeffler was appointed to in January 2020 after Sen. Johnny Isakson retired.

The debate saw both candidates repeating their campaign messages multiple times as the panel of moderators asked questions related to the recent presidential election, remarks from some of Warnock’s past sermons, COVID-19 and racial justice.

The night began with Greg Bluestein of the Atlanta Journal-Constitution asking if Loeffler supports President Donald Trump’s narrative that the presidential election was rigged and if she supports his demands that Gov. Brian Kemp call a special session of the Legislature to appoint new electors to overturn President-elect Joe Biden’s win in Georgia.

“Look, it’s vitally important that Georgian’s trust our election process and the president has every right to every legal recourse and that’s what’s taking place. But I’ve called for investigations and now there’s 250 investigations open here in Georgia. But the president was also clear that Georgians need to come out and vote for David Perdue and myself because of what’s at stake in this election,” Loeffler said.

Local Georgia officials, such as Secretary of State Brad Raffensperger and Voting System Implementation Manager for the State of Georgia Gabriel Sterling, have received threats over the election results and Loeffler has criticized the results.

The senator said that she denounces the threats and added that the future of the country hangs on Georgia’s ability to have free, fair, trusted elections.

Warnock added that it’s time to move forward with the election results and focus on the concerns of the people.

During the runoff election thus far, many of Loeffler’s campaign ads have featured portions of one of Warnock’s sermons where he said “you can’t serve God and the military” and he has said that has been taken out of context.

Loeffler has also tied Warnock to Fidel Castro claiming he welcomed Castro into his church. Castro spoke at Abyssinian Baptist Church in New York City in 1995 and at the time Warnock was the youth pastor.

“I never met him. I never invited him. He has nothing to do with me,” Warnock said.

The candidates also discussed the ongoing coronavirus pandemic and both were supportive of passing COVID-19 relief although neither candidate gave a specific amount they would like to see.

Loeffler praised the effort of the U.S. Senate passing the CARES Act over the summer and the candidates were supportive of a COVID-19 vaccine and encouraged the public to take it.

“When our health professionals tell us that we have a vaccine that works and is effective and safe, I will take it. I will encourage the folks who listen to me, people who are in my church and in the community, to take it,” Warnock said.

Warnock and Loeffler said they would make sure the communities most in need receive the vaccine.

Warnock questioned Loeffler about receiving COVID-19 briefings and then allegedly dumping millions of dollars of stock. Both Loeffler and Sen. Perdue have been accused of trading stocks related to the pandemic after gaining information about the virus, according to the New York Times and 11Alive.

“Thank you for that question because I’ve been completely exonerated,” Loeffler said. “Since I got to the Senate I’ve worked hard to deliver relief to Georgians during this pandemic and I’m continuing to do that.”

Racial justice and policing were mentioned numerous times in the debate and Loeffler repeatedly accused Democrats and Warnock of being supportive of defunding law enforcement.

Warnock said he does not want to defund the police and said that he has previously worked with law enforcement officers and members of the community to come together for criminal justice reform.

Loeffler previously called Black Lives Matter fascists and has alienated members of her basketball team, Atlanta Dream, with this stance, Lisa Rayam of WABE said. She asked if that was still Loeffler’s view on the matter.

“Well, the life of every African American is important and there is no place for racism in this country. But there are organizations whose number one goal is to defund the police and we know that that hurts minority communities more than anyone. We have to stand with our men and women of law enforcement, and I will always do that,” Loeffler said.

She also claimed that Warnock has called for the prisons to be opened up and emptied, has called for abolishment of the cash bail system and said he doesn’t care about safety and security in any community.

Warnock pushed back on those claims.

“First of all, the land of the free is the mass incarceration capital of the world. We warehouse 25% of the world’s prisoners and people on both sides of the aisle know that our current criminal justice system needs reform,” Warnock said.

He suggested Loeffler used her privilege and power as a senator to pick a fight with the Black women on her team, and said she welcomed the support of a QAnon conspiracy theorist and did an interview with a white supremacist.

“First of all, there’s not a racist bone in my body. I have worked to bring communities together my entire life. But this is really terrible coming from someone who has divided people continually,” Loeffler said.

The deadline to register to vote for this election is today, Dec. 7. Early voting begins on Dec. 14 and Election Day is Jan. 5.

Correction: An earlier version of this story misquoted one of Kelly Loeffler’s exchanges with Raphael Warnock. She was talking about Fidel Castro in that particular exchange, not Jeremiah Wright.