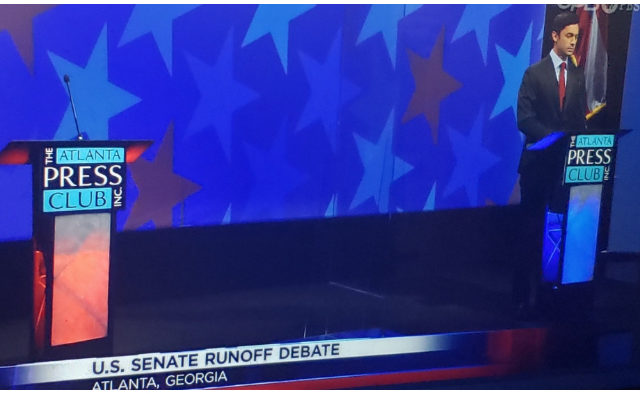 Democratic candidate Jon Ossoff, who is running against incumbent Sen. David Perdue, answered questions next to an empty podium.

The moderators were Russ Spencer of Fox 5, Greg Bluestein of the Atlanta Journal-Constitution and Lisa Rayam of WABE Radio.

The panel asked Ossoff questions on various topics including the coronavirus pandemic, immigration and racial justice.

The night started off with a discussion of COVID-19 and what steps the federal government should currently be taking to control the spread of the disease. Bluestein also asked Ossoff if he would endorse a lockdown if public health experts supported that action.

“I will take my cues from the leadership of the Centers for Disease Control and Prevention. Let me be very clear on this, I will listen to the public health experts and if they recommend that more aggressive mitigation measures are necessary to save lives, it would be foolish for politicians to ignore their advice,” Ossoff said.

He added that he would work to make sure the CDC as well as hospitals, clinics, school systems and health care professionals all have the adequate resources they need to contain the virus.

“They (doctors and nurses) have been the heroes, politicians have let us down, we need to take our cues from the public health experts,” Ossoff said.

Ossoff again discussed the stock trading allegations against Perdue and criticized the senator.

“David Perdue has been getting rich in office and instead of taking public health expertise and guidance from the CDC, and getting that to the people and implementing in policy, he was buying up shares in manufacturers of vaccines and medical equipment and he’s not here because he’s afraid he may incriminate himself in this debate,” Ossoff said.

Spencer and Rayam reminded Ossoff and viewers that the investigation into Perdue’s stock trading has not led to any charges filed against the senator. To that point, Ossoff said he doesn’t concede that Perdue has been cleared as he hasn’t seen any evidence that a federal agency has cleared Perdue. Ossoff encouraged the senator to share such evidence he has.

Another big topic of the night was the need for more COVID-19 relief to individuals and small businesses. Ossoff advocated for the rush of more relief.

“It is absolutely astonishing that the United States Senate since midsummer has not passed any additional direct economic relief for the American people,” Ossof said.

A solid stimulus package for Ossoff looks like stimulus checks directly for the people, direct relief for small businesses, financial support for public health infrastructure like the CDC and hospitals, and an investment in long-term economic recovery.

One of President-elect Joe Biden’s top priorities is passing a new stimulus package, according to CNN. Bluestein asked about what those payments should look like and what limits should be imposed to ensure checks don’t go to people who shouldn’t merit receiving it.

“I think we shouldn’t get bogged down in the details,” Ossoff said. “I think that we should rush immediate, direct financial relief to the American people and it should’ve been done months ago.”

During the debates, the candidates would’ve been given time to ask each other questions. If Perdue was in attendance, Ossoff would have asked him why he continues to oppose the $1,200 stimulus checks and why he didn’t support them to begin with.

The final round of questions turned to racial justice and immigration. Ossoff advocated for comprehensive reform of the immigration system that would provide a path to legal status for undocumented individuals.

“We do need secure borders. We also need to keep our soul as a people and uphold our commitments to basic human rights. We can have an immigration policy that puts American workers first, that provides that path to legal status, that protects dreamers, secures our borders, and doesn’t violate the human rights of innocent people seeking a better life or fleeing persecution,” he added.

Black Lives Matter protests spread across Georgia and the country after the deaths of Ahmaud Arbery and George Floyd. The movement awakened many Georgians to the persistent issues of inequality but Washington is gridlocked on the issue, Bluestein said.

Ossoff acknowledged that he has never known what it means to fear for his life or face false accusations because of what he looks like, but knows that is a daily fear in the Black community.

He said that the late Congressman John Lewis taught him about the power of people to fight for justice as he shared his support of a new Civil Rights Act.

“We can establish national standards for the use of force, We can ensure the true accountability for police brutality and for racial profiling. We can make equal justice under the law a reality in America by passing a new Civil Rights Act, but only if we vote,” he said.

Throughout the night, Ossoff continually reminded voters that early voting starts on Dec. 14 and encouraged everyone to make a plan to vote.