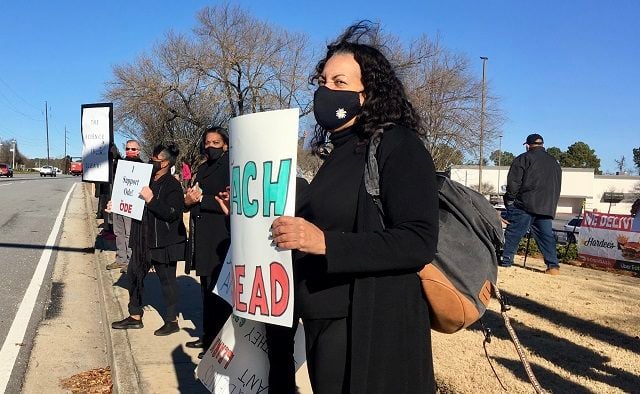 The protest was planned following an announcement made on Dec. 14 that the district would return to in-person schooling beginning Jan. 19. School staff are expected to return on Jan. 4.

In the re-opening plan presented to the DeKalb Board of Education in September, Superintendent Cheryl Watson-Harris stated that schools would remain closed until the number of cases dropped below 100 per 100,000 of population over two weeks, a standard that until very recently neighboring school districts also used. Community spread in DeKalb County is currently at 493 cases per 100,000 over two weeks, according to the Georgia Department of Public Health.

As recently as the Dec. 7 Board of Education meeting, Watson-Harris said she was open to looking at other metrics including positivity rates based on CDC and DPH recommendations, but gave no indication that she planned to go ahead with a plan to return any time soon.

“No matter how you slice it we are still in the high community spread category,” said Watson-Harris at the December meeting. 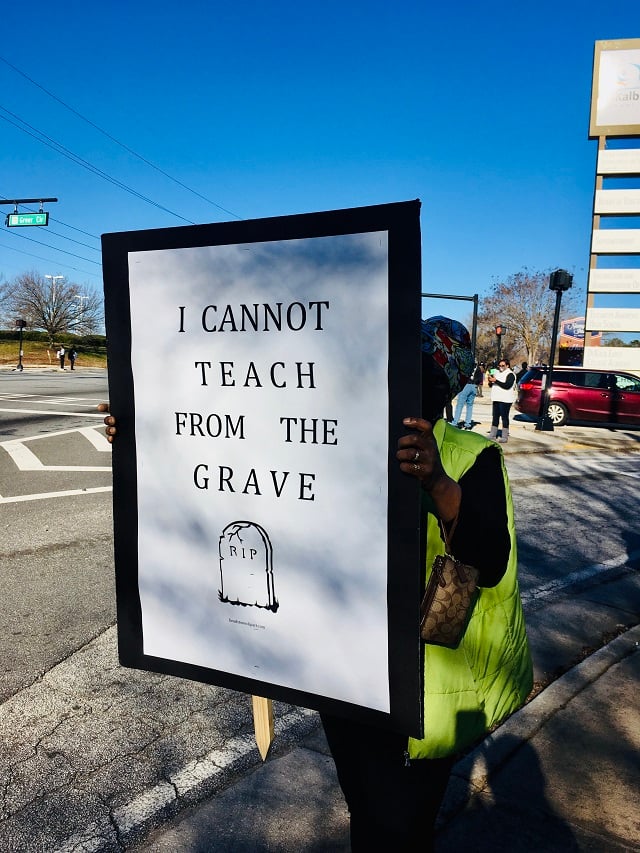 According to the presentation given by the superintendent’s office on Dec. 14, the district would return to school if the positivity rate dropped below 10%.  However, some teachers and parents expressed doubt that this metric would be adhered to.  When Decaturish asked the school district to clarify this, DCSD would not commit to the 10% positivity rate as a determining factor.  The current positivity rate in DeKalb County per the DPH is 10.2%.

Tracey Anderson, a high school English teacher in the district, said she did not have faith that the district would adhere to the 10% positivity rate metric and had unanswered questions about what health professionals had told the district.

“I would like to know what DeKalb medical collaborators, the CDC, the medical advisory board, and DeKalb Public Health have communicated to the school district about the risk for all DeKalb County residents if we are returning to in-person work and instruction with a positivity rate above 10%,” said Anderson.

Henri de Vastey, a French teacher, also expressed distrust of the district’s handling of the situation.

“DeKalb schools has played loose with the truth in other areas, so we can’t take them at their word,” he said. De Vastey pointed out that neighboring school districts are shutting down due to the rise in cases after attempting to open earlier in the fall.

Jones cited lack of communication with teachers and lack of clarity on such details as whether schools had been sanitized.

“Until they have a clear plan, a workable plan, we simply cannot risk our safety,” Jones said.

Anderson, who also has a daughter in City Schools of Decatur, expressed frustration about lack of communication as well.

“I have worked in DeKalb schools for 25 years. I would like the same information [as a teacher] that I have received from the Decatur city schools in order to make an informed decision about my daughter’s return to school,” said Anderson.

Anderson, like other teachers, stated that the district had neither included teachers adequately in planning nor communicated their plans clearly.

Several teachers expressed concern that their [Americans with Disabilities Act] ADA requests were simply being ignored, while Jones said that the district was not taking impacts on the most vulnerable into consideration.

Another area of concern mentioned by Anderson and several other teachers was that a number of DeKalb County’s schools are old, in disrepair, and overcrowded.

SPLOST V money that had been originally allocated to repair Hawthorne Elementary’s 60 year old plumbing was reallocated to HVAC repairs, then restored after an outcry by parents. DCSD Board member Dr. Joyce Morley has pointed out at previous meetings that the HVAC systems in a number of schools are continuing to operate well beyond their projected useful life.

Longstanding infrastructure problems have plagued the district, and could only be solved slowly even without a pandemic.

“We’ve got a $2.2 billion need and we’re in the millions each year to try to fix that,” said DCSD’s Deputy Chief Operation Officer Noel Maloof at the December 7 Board meeting.

Jones says that the district should wait to return until the current surge of cases has subsided.

“We understand from what has happened after Thanksgiving, that because of the holidays the surge is going to continue,” said Jones. Unrestricted travel and holiday gatherings are likely to create more community spread of COVID-19 just as teachers and students are returning to school.

“The teacher’s working environment is the student’s learning environment. It doesn’t seem that they care about either,” Jones added.