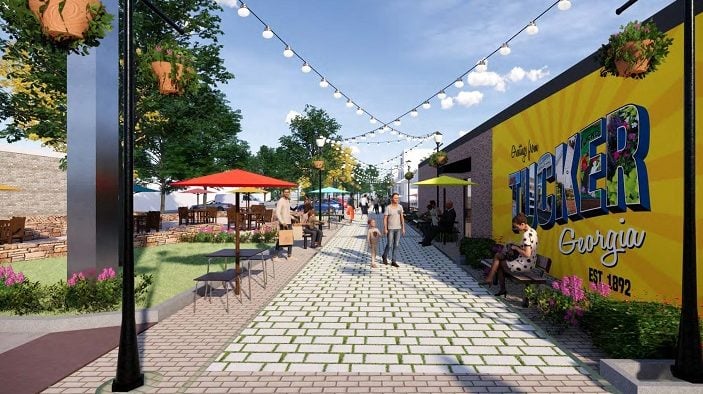 Tucker, GA — In the final meeting of the year, Tucker City Council unanimously voted to adopt two major plans that will change the face of the city: The Downtown Master Plan and Downtown Grid Plan.

Changes to downtown Tucker have been in the works since November 2018, when a planning team and residents met to sketch out the city’s future. Residents discussed land use including pedestrian trails, parks, commercials and residential development and event space.

Two years later, the City of Tucker and Tucker-Northlake CID have created a plan that incorporates walkability, historical integrity and community in a thriving downtown Main Street.

Lee said the grid project, which plans to restore alleyways to pedestrian paths and art installations, is exciting because alleys have been a part of Main Street for nearly 130 years.

“If you want a new idea, read an old book,” said Lee. “This plan will ensure that [the alleys will] be around for at another 100 to benefit the residents of Tucker. It’s been exciting, and it’s been collaborative.”

Looking forward, Mayor Frank Auman announced an emergency declaration of economic relief plan for businesses in Tucker. Under the 30-30 plan, if a business owner can show that their revenues dipped by at least 30 percent in 2020, they can defer 30 percent of the tax they owe until their 2022 occupational certificate renewal. Occupational taxes in Tucker come due on April 15. That tax is calculated on a business’ 2019 revenues. An application for relief will be available on the city website.

“We want to do everything we can to help our local businesses,” said Auman.

– Mayor Auman is proud of Tucker for coping and thriving during the COVID-19 pandemic.

He called out council, city staff, volunteers, the business community and citizens “who have not set the goal at let’s just survive, let’s just get through, let’s just close our eyes until it’s over and come back out of our hole,” said Auman. “When this does start to lift … We’re are going to be moving forward, and we’re going to hit the gas when the time comes.”

– DAF Concrete was awarded a bid for $320,635 to install sidewalks on Elmdale Drive from Fellowship Road to Tucker Industrial Road.

– Baytree Landscape, based in Tucker, was awarded a contract for $70,531 to plant trees, shrubs and groundcover on Main Street. Part of Tucker Streetscape Project, the city’s tree budget will fund the landscaping.

– A direct lightning strike took out one of 12 HVAC units at Tucker Recreation Center in a recent storm. It will be replaced for $36,738. The building did not suffer any damage.

– Finance Director Robert Porche presented the first read of an ordinance to amend the FY21 budget. He called it “mid-year housekeeping.” A second read will be presented in January 2021.