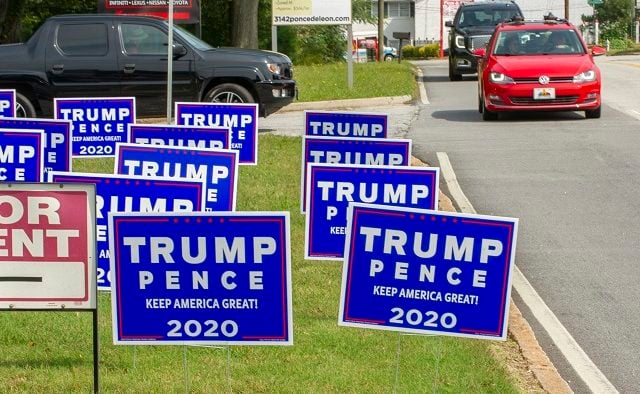 While that would normally be a cause for celebration in Democratic leaning DeKalb County, Jan. 6 was the day that Congress was set to certify the Nov. 3 victory of President-elect Joe Biden. President Trump had invited his supporters to the Capitol to try and disrupt that process, goading them with conspiracy theories about a rigged election and promising that it would “be wild.”

In DeKalb County, where Democratic voters helped propel Jon Ossoff and Rev. Raphael Warnock to victory over senators David Perdue and Kelly Loeffler, there was pride and jubilation. DeKalb voters had made a difference, not only in defeating a man they loathed – Donald Trump – but also in turning the Senate blue.

But there was also an unsettling feeling that something might go awry. Locally, nothing has, so far. Readers, already on edge, began contacting Decaturish after numerous cops showed up at the county courthouse, briefly shutting down roads in downtown Decatur. They were investigating a suspicious package, but it turned out to be a false alarm.

Reporters from Decaturish, already downtown due to the false alarm raised by the suspicious package, began interviewing people they met about what the Jan. 5 election results meant to them. Voters here wondered what challenges their new president and new senators might tackle.

But then the news started to trickle in from D.C. A Trumpist mob had breached security barriers at the Capitol, threatening the safety of elected officials in both parties. Eventuallly the National Guard stepped in to allow Congress to continue its business. In his quest to overturn the results of a lawful election, President Trump was aided by Loeffler, who had pledged to join other senators in contesting the results, a move all but sure to fail. On Wednesday evening, when the Senate was able to get back to business, she announced she would no longer contest Biden’s win.

“The events that transpired have forced me to reconsider, and I cannot now in good conscience object to the certification of these electors,” Loeffler said, according to the Atlanta Journal Constitution.

U.S. Rep. Hank Johnson, D-Ga., tweeted, “Harrowing moments inside the US Capitol!!! Hats off to the Capitol Hill Police protecting us. We are safe and secure. Pray for our nation.”

Four people died on Wednesday during the coup attempt and there were multiple injuries. So far there have been 52 arrests resulting from the attempted coup, CNN reported.

In the midst of all the chaos in D.C. Wednesday, the scheduled monthly Decatur tornado siren test went off – without a hitch – at 5 p.m., briefly startling residents who were fixated on their phone, computer and television screens as they watched what was unfolding in the nation’s Capitol.

The scenes they saw on their screens left local leaders baffled, sad and fuming.

Georgia Gov. Brian Kemp, a Republican who owes his victory to Trump and who consistently enabled Trump’s actions until the president asked him to overturn a lawful election result, broke with the president in televised remarks Wednesday afternoon. He called the day’s events “unimaginable” and used the occasion to rebuke those who wanted him to call a special session of the Legislature to overturn Biden’s win in Georgia.

“For those of you calling on a special session, you can now see what that would have looked like,” Kemp said.

Kemp urged the country to come together and move forward. He said the National Guard is ready to act if needed, but he didn’t think that would be necessary.

But state Sen. Elena Parent, a Democratic senator who herself was threatened after becoming the target of Trumpist conspiracy theories, said the events of Jan. 6 were not unimaginable to her at all.

“This is a sadly predictable end to the Presidency of Donald Trump, who sowed distrust and division for four years while encouraging white nationalists,” she said. “After months of falsely claiming that the election was stolen from him and using apocalyptic language, it’s not surprising that he has inspired violence from his supporters. He has violated his oath to protect our country. The country and the world will be relieved on January 20th to have a fitting leader.”

State Rep. Mary Margaret Oliver, a Democrat representing Decatur, questioned how things could’ve gotten so out of hand. Where was the National Guard? Why were members of the Trumpist mob able to enter the Capitol?

“I am horrified,” Oliver said. “I have been one in recent weeks who has not believed that the protesters would turn violent. I didn’t believe they would ever show up in the way they threatened to. I’m used to bullies and bullies frequently back down. I’m very shocked today that these bullies have carried forward with their threats. I’m also very confused as to how they really got through whatever security was there to come onto the floor of the Senate.”

She added later that, “At the same time I’m celebrating today. DeKalb County has been in the national news and carried an enormous burden successfully to change all of the politics of our country.”

At the local level, reactions were also a jumble of negative emotions.

“In response to the deadly riot in our nation’s capital today, the Atlanta Police Department will continue to monitor events and coordinate with our federal, state and local partners accordingly,” she said. “While there is no curfew in our city, I ask all Atlantans, out of an abundance of caution, to please stay home this evening. Millions of Georgians cast their ballots on yesterday because of their belief in our democracy. While there are moments in our country’s history in which we may falter, we will not fail. America is stronger than any one man.”

When asked what he thought about Wednesday’s events, Tucker Mayor Frank Auman said, “There’s nothing OK about all that. Nothing.”

“I’m just glad they’re back to business, and I look forward to the peaceful transition of power, as is our hallmark,” Auman said.

Avondale Estates Mayor Jonathan Elmore said everyone just needs to calm down. He said the people unhappy about the Nov. 3 election results will likely see another election where their side wins, and that the balance of power will shift every few years, making one side happy and leaving the other side unhappy.

“Four years ago, people pleased with the results of this election were not happy,” Elmore said. “You’ve got to have faith in the constitution and the process. If it’s messed up, you fix that. They’re not perfect, but they seem to be working pretty good. If your side lost this time, regroup and try again next time. This is volatile stuff, so I would just say calm down, you know?”

“Today our country was to certify our presidential elections and formally recognize Joe Biden as our president-elect, and instead we witnessed the unlawful siege of our nation’s Capitol,” she said. “We must come together as a nation to recognize the peaceful transition of power and work together to heal our differences.”

Decatur Mayor Pro Tem Tony Powers, who owns a local hardware store, said he was so furious he left work and said he also cried over what he saw. Powers, who is Black, said Black Lives Matter protesters were met with force while they were peacefully protesting, noting the incident in June where members of law enforcement used tear gas to clear peaceful protesters in DC so Trump could stand in front of St. John’s Episcopal Church and hold a Bible.

Powers said there should be consequences for what Trump has done and the actions the president encouraged today.

Decatur Mayor Patti Garrett said for her, what happened Wednesday was a reminder of how frail our democracy is.

“Our democracy appears to be in a pretty fragile place right now,” Garrett said. “It seems unthinkable in the United States of America that people would storm the capitols, break windows and break in and have our elected representatives fear for their safety and their lives. For that to happen in our country is appalling, and heartbreaking. How did we get here and what happens next? When I think about governance and the common and greater good, those are sorely missing in what we’re watching.”

The work of democracy continues. Though Ossoff’s and Warnock’s victories are certain, there are still votes to count. At 4 p.m., DeKalb County announced that there were still 20,000 ballots left.

“We are continuing to work diligently to count each and every ballot and we can see the finish line,” DeKalb Voter Registration and Elections Director Erica Hamilton said. “We know everyone is anxious for our final numbers and I appreciate the patience and support of our constituents as we carefully and accurately complete our counting process.”