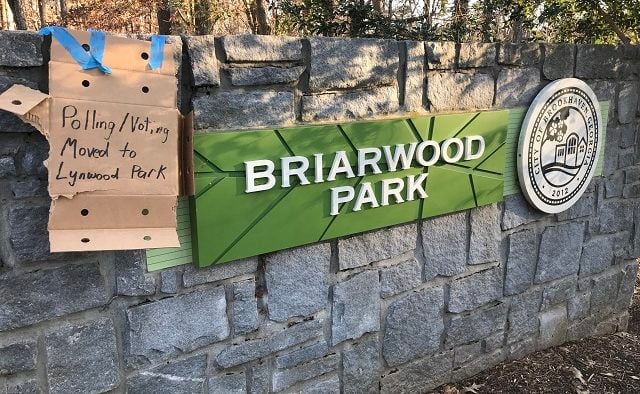 A sign at the Briarwood Recreation Center directs voters to a different polling place for the Jan. 5 runoff election. Photo by Logan C. Ritchie
Share

Brookhaven, GA — DeKalb County resident Lawanna Carter is a veteran poll manager who said she finds working elections enjoyable. For the past 20 years, Carter has been a poll manager at Briarwood Recreation Center in Brookhaven.

“It’s my way of giving back to the community,” she said, adding she previously worked at Fulton County polls. “I always try to do a good job. We used to get graded, but with the new system they don’t do that anymore. I always like to get an A.”

Briarwood Recreation Center is currently under construction. Carter, along with Briarwood precinct voters, shifted to Lynwood Recreation Center to vote in today’s election, which is the runoff for Georgia’s U.S. Senate seats and a seat on the state Public Service Commission. Lynwood is a little more than 3 miles away from Briarwood. The location change was announced on Dec. 11 by DeKalb County Voter Registration and Elections department.

Erik Burton, communications for DeKalb elections, said notices were sent by mail to voters about the poll location change. Yet some voters still arrived at Briarwood, confused and irritated.

One couple who walked to vote at Briarwood Recreation Center said they never received a letter or notice. When they tried to scan the QR code, it was inaccessible. DeKalb officials posted a correct QR code before noon.

Seth Bringman, a spokesperson for voter advocacy group Fair Fight, said, “We encourage any voter with a question about their polling place to call the voter protection hotline at 888-730-5816. Fair Fight is notifying as many voters as possible of changes. It’s also important for voters to know that 99 percent of polling places are open and running as expected, and any voter who wishes to confirm their polling place can do so at www.iwillvote.com.”

Dan Hawks, a volunteer from DeKalb Democrats, was on site at Briarwood to redirect voters to Lynwood. Hawks said when he checked the Georgia Secretary of State’s My Voter Page one week ago, his polling place was listed incorrectly.

“This was a late decision that happened about a week or week and a half ago, and that information did not make its way to the Secretary of State, so my voter page was not updated but the DeKalb voter page was,” Hawks said.

Doret C., who declined to give their last name, has voted at Briarwood for about five years. She voted at Briarwood on Election Day, Nov. 3, 2020. When she arrived to vote early this morning, it was dark, no cars were in the parking lot and she noticed signs about the polling location change.

“November I voted here. I came back this morning, and it was changed. Which is fine – you can change the location – but at least make it accessible by bus. [Lynwood] is way out. I’ve never voted in Georgia where it was not accessible by bus,” Doret said.

Inside Lynwood, voting was slow and steady. Exiting the polls, people gave several reasons for voting in person. Some ran out of time around the holidays, others prefer to vote in-person for every election. One woman, wrangling two small children proudly donning election stickers, said voting on election day is patriotic.

“I like to vote in person. I think it’s exciting. Maybe it’s because I’m young,” a 20-year-old voter said. “I voted early here in the last election, but now I have to go to Montgomery [Elementary School] because this is not my regular polling place. That’s okay, I don’t mind.”