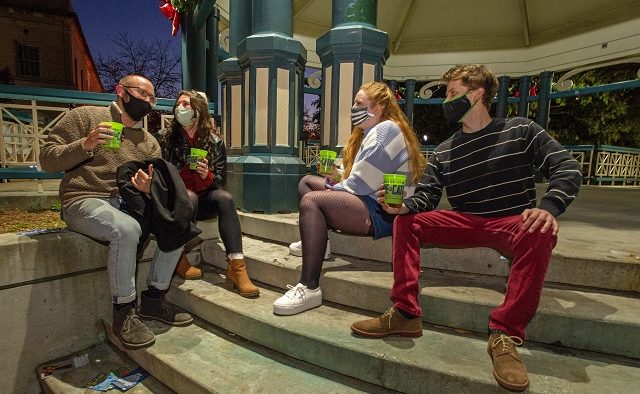 Decatur, GA — While Decatur’s open container ordinance was designed to help people support local bars and restaurants during the pandemic while maintaining social distancing outside their dining rooms, some feel that Decatur is getting its priorities wrong.

“I have an issue with this,” Mayer said. “I was not expecting this ordinance to become such a point of contention as it has become within the community. I think that if this were not in the midst of a public health crisis, the community would be all on board with it. I still fully and completely support my position in voting yes for this ordinance back in October. My concern is that we are voting on this without the public having an opportunity to opine publicly as to whether or not they still support this ordinance.”

She said she wanted the commission to have more time to hear feedback from the public. Commissioner George Dusenbury seconded the recommendation, and Mayor Patti Garrett invited Lesa Mayer to frame the suggestion as a formal motion.

Other commissioners said they had not heard of any objections to the ordinance.

“I have not been contacted with concerns about this in the community, at least on the north side in District 1. If I am in the next two weeks, I will share anything I see or hear,” Commissioner Kelly Walsh said.

Mayor Garrett said, “I with, with Commissioner Walsh, have not heard of particular concerns … so it will give us a little bit more time for feedback from our businesses.”

Angela Threadgill, Decatur’s Director of Planning and Economic Development, said during the Jan. 4 meeting that restaurants are enthusiastically in support of keeping the ordinance, though she noted that a survey sent to restaurant owners by the city had limited responses due to the holidays.

“But those restaurant owners that we did hear from expressed their enthusiastic support for the ordinance to be extended,” she said.

Some Decatur residents commenting on Facebook have expressed frustration that the public is invited to “stroll around outside with cocktails,” while schools remain virtual. These comments were in response to a post in the Facebook group “Oakhurst Neighborhood Decatur GA” advertising the FAB Friday event on Nov. 20, 2020.

“No thanks,” one person commented. “Not during the raging pandemic.”

Others were concerned that inviting the public to eat or drink implies that they will not be masked.

“You have to unmask to eat/drink….which is contrary to our mask mandate,” another commenter said. “Additionally, why is it ok for adults to walk around unmasking as a priority, when our schools are closed for children to be completely masked? Decatur has this one wrong.”

Commissioner Mayer jumped into the comments section on that post and offered some context to the city’s decisions, as well as specifics about the city’s mask mandate, which does not require masks outdoors.

Following the Jan. 4 meeting, Mayer said, “I would not feel comfortable voting for a lengthy extension without giving those individuals who have been vocal about the issue on social media — or any other interested party — the opportunity to make a public comment about it, whether for or against.”

People interested in contacting their commissioners about this issue can find their city email addresses by clicking here.