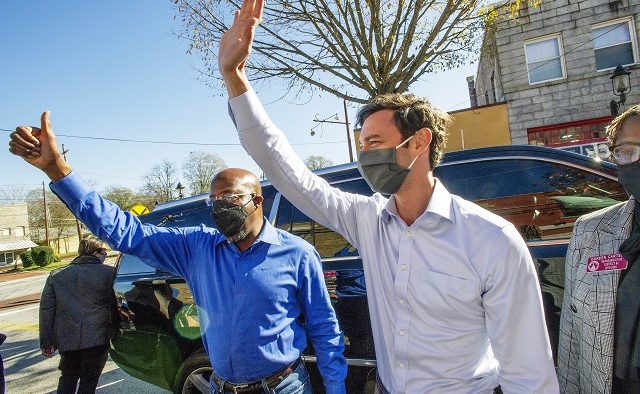 It means that President-elect Joe Biden will have a Senate he can work with when he’s sworn in Jan. 20, allowing him to pick a cabinet and push for legislation without Republican roadblocks.

It was a victory that owes no small debt to voters in DeKalb County, particularly Black voters, who helped push both candidates over the finish line.

As of 8:25 a.m. Jan. 6, Ossoff leads Perdue by 16,370 votes out of more than 4 million votes cast. Warnock leads Loeffler 53,430. The margin of victory in the Ossoff race could lead to a recount, but it’s unlikely the result would change.

In the one disappointment for Democrats, Daniel Blackman lost to Republican incumbent Lauren “Bubba” McDonald Jr. in the runoff for Public Service Commission, losing by 68,976 votes. According to the Secretary of State’s Office, there were 46,360 fewer voters in that race than there were in the senate runoffs.

Late Tuesday evening, it appeared Perdue and Loeffler were on track for a win but people who follow the numbers knew better. At 10:49 p.m., it was announced that there were still 171,000 early voters left to count in DeKalb County, part of Georgia’s blue wall.

And when they were counted, they broke hard for Ossoff and Warnock.  According to the results, 273,292 voters in DeKalb voted for Ossoff and 275,338 voters cast their ballot for Warnock.

There are still votes trickling in and Decaturish will be following the results throughout the day. To see our Election Day coverage, visit Decaturishvotes.com.