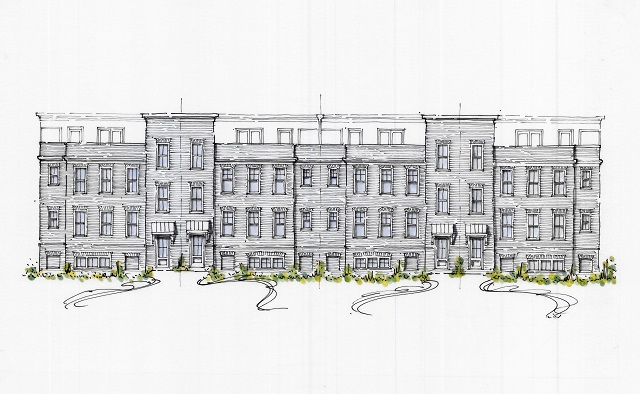 A design drawing showing how the new townhomes proposed for Commerce Drive might look. Source: City of Decatur.
Share

Decatur resident Phillip Rassel and Atlanta builder Bud Rogers hope to build nine four-bedroom townhomes on the property. One of the homes would be reserved for buyers making less than 80 percent of the area median income (AMI) to comply with Decatur’s inclusionary zoning requirements.

The residences would be similar to those constructed on Northern Avenue with rooftop terraces and parking in the rear of the development off a private alley, Rassel told the commission.

Several residents of the surrounding neighborhood attended the virtual Zoom meeting, speaking both in favor of and in opposition to the development.

“We are in support of the zoning change and in support of this property being redeveloped with townhomes,” said Stephanie Hudson, who lives at 140 Ponce de Leon Court and whose backyard borders the property. “The current structure on the property is a dilapidated eyesore that has been deemed so unsafe the current owner is not allowed to live there. Developing it would increase tax revenue for the city and would certainly be better than the current condition.”

But several other residents raised concerns about how the townhome residents would enter and exit the property given its narrow configuration and location so close to the busy Commerce and East Ponce intersection.

Because the parcel is only 70 feet wide, townhome residents would access it by a one-way alley, entering on East Ponce de Leon and exiting onto Commerce. Both neighborhood residents and members of the Planning Commission wondered whether that would result in traffic backing up into the intersection at busy times of day.

“I have concerns about ingress and egress to the site, particularly if you are coming east on Ponce from downtown and turning left into the entrance,” Planning Commission member Lori Leland Kirk said. “It seems like it would certainly back traffic up into that intersection.”

The proposed location of the exit on Commerce is also dangerous, said Rachel “Susie” Kezh, of 117 Ponce de Leon Court.

“People fly over that hill [on Commerce] coming from the south,” Kezh said. “This is right before the curve in the road and there are a lot of accidents there as it is. If you add more cars entering the road there, it just makes it even worse.”

Alan Wieczynski, a landscape architect who lives at 416 East Ponce de Leon, two doors down from the proposed development, said he was concerned that the current engineering drawings for the site did not reflect important details about stormwater and sewer management as well as the height of the buildings relative to their surroundings.

“I want people to understand how difficult this site is,” Wieczynski said. “If you look at the high point where Ponce hits Commerce and the low point at its northeast section, there is 26 feet of [elevation] change. That is a lot of fall over a very short property. It averages out at an 8 percent slope.”

The design drawings that he has seen from the developer show a level elevation, but that is not possible with the existing grade change,” he said.

“The applicant has proposed four stories for these units, but the zoning for RM-22 dosn’t support four-story buildings,” he said. “Only way to get the fourth is if there is a  basement  that is more than 50 percent recessed in the ground. Looking at the site, it doesn’t seem that you are going to be able to sink these buildings low and still have the drive-under parking.”

If the entire site were filled in and made level, it would need a 21-foot retaining wall, he estimated. But, the developer has told the neighborhood residents that there would only be a four-foot wall and only at one corner, he said. “There is no documentation of this in the application at all.”

And, even though the developer has indicated they will have on-site underground stormwater detention, they have not said where the water from the tanks will be discharged.

“Removing the existing trees and maximizing the lot coverage with so much impervious surface is going to increase the stormwater runoff significantly,” he noted. The on-site stormwater detention must be tied into the city’s existing infrastructure for removal and not just allowed to discharge into neighboring yards, he added.

In discussing the application, Planning Commission members agreed that they needed more detailed plans from the developer before they would be willing to recommend the rezoning to the City Commission.

“There seems to be a significant variance between the drawings and how the development would sit on the site in reality,” commissioner Joseph Greco said. “This needs to be included as part of a thorough evaluation.”