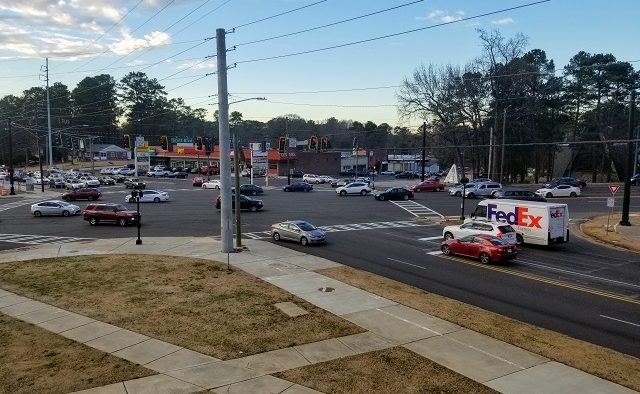 Because Scott Boulevard is a state route, the Georgia Department of Transportation (GDOT) has ultimate authority over any equipment and changes at that light, though DeKalb County is responsible for maintaining it, Quinn Hudson, chief communications officer in the Office of the CEO for DeKalb County told Decaturish.

“During a recent investigation, GDOT discovered a faulty communications cable was installed during their equipment upgrade to increase functionality at this large, well-traveled intersection,” Hudson said. “The cable must be replaced and, due to COVID delays, a replacement has not been obtained. The county is working with GDOT on an intermediate repair plan to reduce the impact to drivers until the replacement part arrives and is installed.”

Nearby residents have been posting on social media about frequent outages at the intersection since at least the middle of December, said Deb Elkin, a resident of Medlock Park who said she contacted the office of DeKalb County Commissioner Jeff Rader and state Rep. Renitta Shannon about the matter.

The outages often appear out of the blue and unrelated to any traffic accidents, specific time of day, or poor weather. The signals would be working normally and then just start flashing red in all directions.

“Last week had a lot of incidents–some that lasted a few hours–and sometimes they occurred more than once per day,” Elkin said. “Personally, I have been in the intersection twice when the lights were out and it was really truly frightening. I’m not exaggerating when I say it felt like I was taking my life in my own hands.”

Also concerning was the difficulty residents had reporting the problems to the county, said Jim Stovall, who lives in the neighborhood behind the Suburban Plaza Walmart.

“Several people have posted on Facebook that they tried to call in to the county number to report when the lights went out, but no one answered,” he said. Stovall himself made numerous attempts before reaching someone who answered the line.

“It didn’t go to voicemail and no one else is answering that number,” he added. “That concerns me because there would be no way for them to know how often this happens, if only the odd call gets through.”

In a post on the Medlock neighborhood Facebook page, Rep. Shannon said that her office had contacted GDOT about the matter and that transportation engineers were monitoring cameras in the area to keep tabs on the traffic signals.

“We are working on this as it seems to be an ongoing issue,” she wrote.

Residents can also report any further problems to the DeKalb County Engineering Office at  404-294-2041.