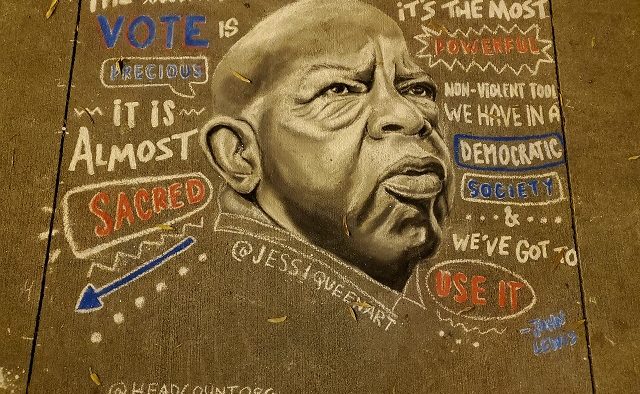 Chalk art in front of the courthouse on the Claremont Side. Photo taken on Jan. 4, provided by a reader.
Share

The first of its kind competition held January 21, 2021, was spearheaded by Goizueta MBA student Willie Sullivan (‘21MBA) to examine how companies can address racial injustice within their organizations.

The 105 team applicants were narrowed to 24 teams of students from across the country that investigated how their assigned corporation could best use its resources to address issues of racial injustice and disparities in wealth, health and education. Named for the late Atlanta Congressman, Fortune 500 companies including Walmart, Salesforce, HP, Johnson & Johnson, Southern Company and Truist Bank joined as corporate partners to serve as models to help their organizations address structural racism.

The winners of the inaugural John R. Lewis Racial Justice Case Competition will divide their monetary winnings between the team and the racial justice/inequality organization of their choice.

– First Place ($20,000) – USC Marshall School of Business working with Johnson & Johnson. Half of the winnings will be donated to Step Up for Students and Black Girls Code.

– Second Place ($10,000) – Emory University’s Goizueta Business School working with HP. Half of the winnings will be donated to One Goal of Metro Atlanta.

– Audience Award ($10,000) – Harvard Business School working with Truist. Half of the winnings will be donated to The Advancement Project.

Goizueta launched the student-led idea last summer after the police shootings of Breonna Taylor, George Floyd and Ahmaud Arbery. Sullivan saw businesses releasing statements on racial injustice but wondered what happens after the statements are posted. He wanted to create a competition that looked into what could be done to address racial injustice and create lasting change.