Happy that Warnock and Ossoff won? Thank the canvassers who worked DeKalb County

Happy that Warnock and Ossoff won? Thank the canvassers who worked DeKalb County 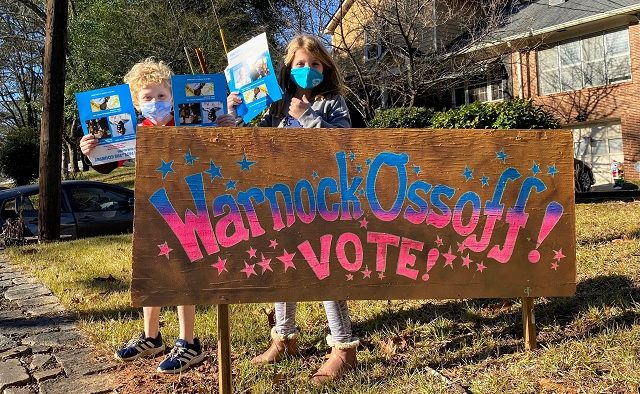 DeKalb County resident Lauren Estrin took her kids out to help cure votes, and on separate occasions to campaign for the Democratic Party. Photo by Lauren Estrin.
Share

DeKalb County, GA — Groups of canvassers large and small covered the streets of DeKalb County, making a difference in the record number of voters in the Jan. 5 Senate runoff that turned Georgia blue again.

In a record-breaking turnout, 3 million Georgia voters cast a ballot including 342,000 in DeKalb County. According to the results, 273,292 voters in DeKalb voted for Ossoff and 275,338 voters cast their ballot for Warnock.

Encouragement came from DeKalb County Commissioners, including Commissioner Lorraine Cochran Johnson who recognized colleagues’ hours of work on the outcome of the runoff election.

While door knocking, Asians for Ossoff and Warnock volunteers came across an enthusiastic voter who said, “We need equal justice, democracy and humility.”

A vote for Ossoff and Warnock means we can transform our democracy. Vote on 01/05 If you already voted, THANK YOU 🙏🏽.

Asians for Ossoff and Warnock is a campaign paid for by the AAAF PAC and is not endorsed by any candidate or candidates committee. #AllEyesOnGeorgia pic.twitter.com/DCiOgSwj7R

When an absentee ballot is rejected, elections officials notify the voter. Ballots can be rejected because of improper identification or signature match. If a voter does not cure, or fix, the ballot, volunteers go door-to-door to help.

“They were not tech savvy, and English was not their first language,” said Estrin. “To cure the ballots of four people whose votes would not have counted was incredible.”

Estrin arrived at a house with a sign in the window that read: “Don’t ask us about voting!” She knocked anyway, but there was no answer. At another home, the door was opened by a man wearing a Jon Ossoff t-shirt.

“I told him it was the equivalent of wearing the t-shirt to the concert,” she joked.

There were many doors that went unopened, Estrin said. When she finally met some voters, she was faced with explaining that curing their ballot would only take a few minutes. People are weary about signing something, she said, adding that because of the pandemic, people are not welcoming right now.

The month leading up to the Senate runoff, Rep. Doreen Carter organized a stop for the Ossoff campaign at several Lithonia businesses including Green Love Kitchen, Black Dot Cultural Center and Bookstore and Flavaz Barber Shop.

Kazemde Ajamu is the host of The Urban Politician podcast and owner of Black Dot Cultural Center and Bookstore. He said Ossoff was running late, but took time to buy a pour over coffee and “How to Be an Anti-Racist” by Ibram X Kendi at Ajamu’s suggestion. The pair talked about police reform and the Voting Rights Act of 1965.

“I am extremely excited and optimistic that Georgia voters sent Raphael Warnock and Jon Ossoff to represent us in Washington,”  Ajamu said. “I will enjoy this … with my eyes set on the Georgia Gubernatorial Race, State House, and Senate Elections just two short years from now. If we want real, meaningful change we must continue this fight until all Georgians have an adequate living wage, healthcare, housing, education and police reform.”

One month later, Black Dot was on the map again when the Vote Float, a rolling rally that engaged hundreds of people across DeKalb County, stopped by. Organized by Decatur resident Clare Schexnyder the Vote Float appeared at a Jon Ossoff event in Stone Mountain, then drove onto Lithonia.

“We then drove through multiple neighborhoods in Lithonia where people came out of their homes and danced to the music, took videos and pictures, and waved and cheered to let us know they’d voted or had a plan to vote on Election Day. The energy was incredible,” said Schexnyder.

Blasting music from Dunwoody to Stonecrest, the Vote Float volunteers handed out masks and reminded people to vote. People came out of their homes, taking pictures and smiling, and kids ran alongside the float, waving wildly and shouting “gracias” and “Feliz Nueve Anos,” Schexnyder said.

Karen Mixon, first vice chair of DeKalb Democrats, said, “They know their communities best, and between the paid staff and the volunteers we left literature at over 75,000 homes. We use this strategy because we wanted to engage the community in our efforts both now and in the long-run. The staff and volunteers live here, so we’re just going to continue to build this infrastructure. We have over 130 precinct captains now, and we’ll keep going until we have all 191 covered.”