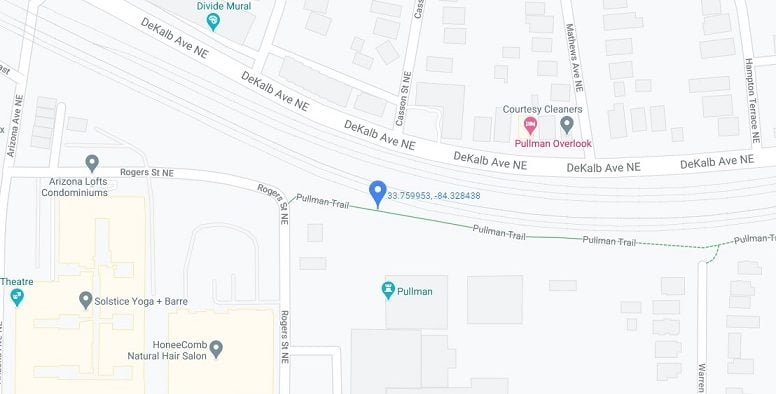 The approximate location of a sexual battery that occurred on Jan. 4. (Image obtained via Google Maps)
Share

Atlanta, GA — A woman was shoved to the ground and sexually assaulted by an unknown man while out for an early morning jog on Pullman Trail in Kirkwood on Monday.

The victim was jogging on the trail behind Pratt-Pullman Yard around 6:30 a.m. when the man pushed her to the ground from behind, then groped her genital area over her clothes, according to Atlanta police.

“She stated that she was kicking at the male and screaming at him and she was able to fight him off and ran west to Rogers Street,” according to an incident report.

The perpetrator initially ran away going east on the trail, but then started walking back toward the victim.

“[The victim] flagged down a female that was driving on Rogers Street and the male then ran away going east on the trail,” the report said.

The victim, a Kirkwood resident, said she didn’t get a good look at the perpetrator but that he was possibly a white male between 5 feet 8 inches and 6 feet tall, wearing a dark-colored beanie, fluorescent orange short-sleeved shirt possibly over a long-sleeved shirt and running shoes.

The victim was unsure of the perpetrator’s age or if he had any identifiable features. He did not say anything during the attack.

An investigator with the Special Victims Unit later interviewed the victim at her home.