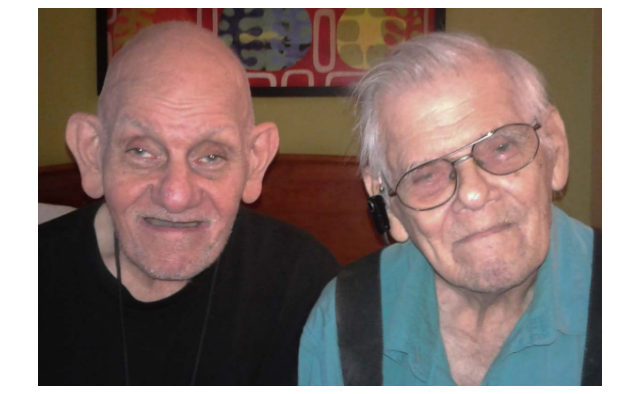 Greater Decatur, GA — Residents and businesses came to the rescue of two elderly neighbors after a tree tore a hole through the roof of their home, cutting off the electricity and forcing them out of the house.

The trouble began in July when a tree fell on the Valley Brook Estates home of brothers Quentin and Gary Abbott, displacing them to a local extended stay motel. A bad situation became worse when the transmission failed on Quentin Abbott’s truck, leaving them without transportation.

Neighbor Judy Stroud noticed the tree was still in the Abbotts’ yard the following month and the brothers were nowhere to be seen, leading her to track them down at the motel.

“That’s when I learned the story,” she told Decaturish. “I realized instantly that they needed help if they ever would be able to get back into their home.”

A number of health issues compounded the Abbotts’ situation. Quentin, 77, has COPD and suffered hearing loss during his time in the U.S. Coast Guard. Gary, 72, is illiterate, uses a walker due to breaking his leg recently and depends on Quentin to take care of him. The only other family they have is an 85-year-old cousin who lives out of state.

Stroud said she was “so sad and appalled” at how difficult it was for the insurance company to help the Abbotts, so she volunteered to become their contact and do the “heavy lifting” to get the house repaired.

“I’ve been unable to do all these things by myself,” Quentin said.

Stroud created a GoFundMe for the Abbotts in September and posted the link on Nextdoor and in a neighborhood Facebook group. Neighbors started contributing and asking how else they could help.

“I think we all have experienced hard times at some time or another and realized from the condition of the house and the health of the brothers that they needed some serious assistance,” Stroud said.

A group of neighbors met Stroud at the Abbotts’ house on Labor Day to cut up the tree and clean the yard up. Two neighbors volunteered to maintain the yard in the meantime. Another neighbor taught Stroud how to set up a Meal Train account for the Abbotts, providing them with groceries and home-cooked meals. Others pitched in with advice on dealing with the insurance company.

The fundraiser’s initial goal was quickly met, so Stroud increased it to $20,000. About $15,000 has been raised. The money has gone to paying for the Abbotts’ motel fees and food, fixing the roof and restoring the power, which finally happened on Thursday.

C.J. Foote, co-owner of Cascade Services Company on Grant Terrace, did major repairs and renovations at no cost to the Abbotts. He also donated a used refrigerator and washer and dryer.

“We could never have afforded these repairs without C.J.’s help,” Stroud said.

Next, the furniture, appliances and other items destroyed by mold will be replaced and the Abbotts can soon move back in.

“[The neighbors] have been a lifesaver,” Quentin said. “If it hadn’t been for them, I don’t know what my brother and I would have done.”