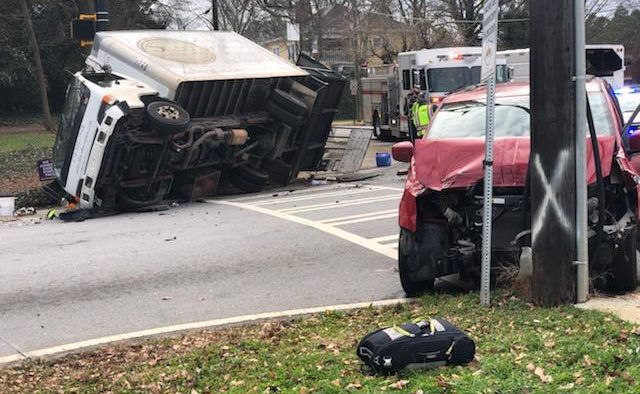 Police responded to the intersection of West College Avenue at South McDonough Street around 12:45 p.m. on Jan. 26.  Photo provided by Ralph Ellis
Share

Decatur, GA — Decatur Police responded to a nasty-looking crash on Jan. 26, but there were no major injuries according to a spokesperson.

Police responded to the intersection of West College Avenue at South McDonough Street around 12:45 p.m. on Jan. 26.

“The investigation revealed a red Dodge Caravan was traveling southbound from North McDonough Street onto South McDonough Street crossing over West College Avenue,” Sgt. John Bender said. “A white Isuzu panel truck was traveling eastbound on West College Avenue. The Dodge struck the Isuzu in the side while traveling through the intersection causing the truck to tip over and lean against a utility pole and a brick sign for Agnes Scott College.”

The driver of the Dodge received minor injuries and was treated at the scene.

Police did not cite either driver.

“No citations were issued due to no witnesses to the event and conflicting stories from both drivers,” Bender said.

In other city of Decatur Police news:

– The Police Department is also warning people about the latest scam going around.

“We have been made aware of recent incidents of residents receiving calls from someone claiming to be a member of the Decatur Police Department, stating there is a warrant out for their arrest for failing to appear in court,” the Police Department said in a Facebook post. “The caller will then instruct the resident to withdraw money and send it to them via a gift card or money transfer service such as CashApp to take care of the warrant. ALL of these types of calls are fraudulent. No law enforcement agency will ever call you and ask for any type of payment over the phone, nor will they ever offer to rescind a warrant if a payment is immediately made. If you receive a call of this nature, please hang up. You may be a target. You don’t have to be a victim.”