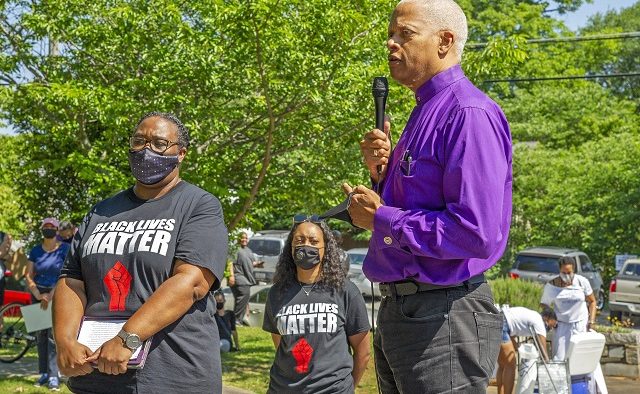 FILE PHOTO: Congressman Hank Johnson speaks at the city of Stone Mountain’s March for Social Justice with the event’s organizer, city of Stone Mountain Mayor Pro Tem Chakira Johnson beside him June 20. Johnson said to the crowd of over 100 people. “We are here to spread love not hate. We are all brothers and sisters today. I have a feeling things are about to change, shift a little. Down from my office was a Confederate monument that had been there 112 years. As of Thursday night, it is gone. The times they are a changin”. Photo by Dean Hesse.
Share

The 25th Amendment to the U.S. Constitution would allow the Vice President and a majority of cabinet members to decide the president is unfit to continue serving in office. The calls came after the President goaded and encouraged his supporters to descend on the Capitol on Wednesday, Jan. 6, to stop the certification of Joe Biden’s Nov. 3 election win.

Johnson signed onto a letter released by the House Judiciary Committee and addressed to Vice President Mike Pence.

“For the sake of our democracy, we emphatically urge you to invoke the 25th Amendment and begin the process of removing President Trump from power,” the letter says. “President Trump has shown time and again that he is unwilling to protect our Democracy and carry out the duties of the office.”

The full letter is printed at the end of this article.

On Twitter, Johnson hasn’t said anything recently regarding the 25th Amendment. His latest tweet defended a previous statement he made comparing Trump to Hitler.

“Chaos and confusion ruled the day …was what I said in a speech I delivered on Jan. 1 2019 and was deluged with an avalanche of hateful mail, calls, and social media posts,” Johnson said on Twitter Wednesday evening. “No need to say more. Heed my words America!”

Chaos and confusion ruled the day …was what I said in a speech I delivered on Jan. 1 2019 and was deluged with an avalanche of hateful mail, calls, and social media posts. No need to say more. Heed my words America! https://t.co/hSPIS2NgnB

While most elected officials in Congress calling for Trump’s removal are Democrats, Republicans also have been quietly considering it as well, according to Axios.

Here is the full letter from the House Judiciary Committee:

It is with great sadness that we write to you following the incidents that unfolded at the U.S. Capitol today. As you presided over the U.S. Senate, angry supporters of President Trump attempted an insurrection, illegally storming and breaching the U.S. Capitol building to stop the certification of President-elect Biden’s victory.

The world watched aghast as insurrectionists, who had been egged on by the President, threatened the safety of elected officials and staff and destroyed public property as they stormed and occupied both the House and Senate chambers bringing our democracy to a halt. At one point, the insurrectionists even removed an American flag flying at the Capitol and replaced it with a Trump flag.

Meanwhile, President Trump remained silent even as insurrections broke windows, threatened U.S. Capitol Police, and scaled the walls of the Capitol. Earlier in the morning, President Trump held a rally at the White House and told protestors “I’ll be with you” and encouraged them to march to the Capitol to protest the certification of the electoral college votes.

Last Saturday, President Trump sought to undermine our democracy by encouraging election officials in Georgia to find more votes to overturn the election results. Even before the election, President Trump refused to commit to the peaceful transition of power. We have seen the fruit of the President’s remarks in the violence and chaos unleashed today.

Section 4 of the 25th Amendment to the U.S. Constitution provides the Vice President and a majority of sitting Cabinet secretaries with the authority to determine a president as unfit if he “is unable to discharge the powers and duties of his office.” Even in his video announcement this afternoon, President Trump revealed that he is not mentally sound and is still unable to process and accept the results of the 2020 election. President Trump’s willingness to incite violence and social unrest to overturn the election results by force clearly meet this standard. So too are his recent Tweets, which Twitter has since deleted, saying the election was “stolen” and that today’s riots “are the things and events that happen.”

For the sake of our democracy, we emphatically urge you to invoke the 25th Amendment and begin the process of removing President Trump from power. President Trump has shown time and again that he is unwilling to protect our Democracy and carry out the duties of the office.