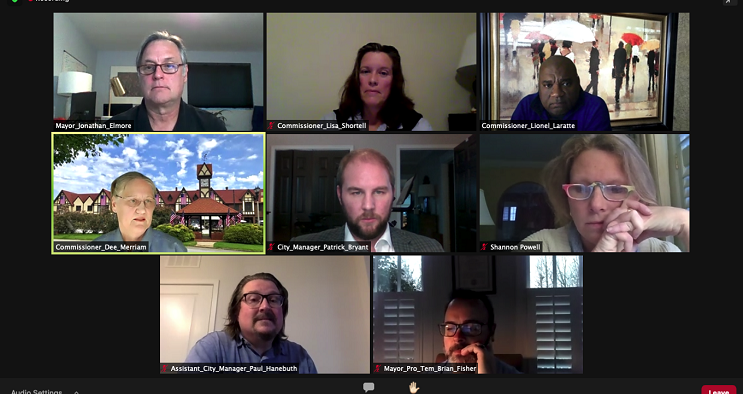 City Manager Patrick Bryant, during the work session, explained five themes that have come up within the feedback from the commissioners and residents. The first is eliminating the architectural review board, which is a five-member board that reviews applications for architectural design approval following the Urban Design Guidelines and the Urban Design Details, according to the city’s website.

The motivation for this recommendation is twofold, Bryant said.

“One, the goal was to get away from a more subjective code to a more objective code and one of the ways we do that is by building in design and architectural aesthetics in the commercial district into the code itself,” Bryant said.

Then to streamline the waiver and variance process, the suggestion in the code is to run those through the Planning and Zoning Board for recommendation to the City Commission, who will make the final decision.

Concerns were raised by the board and residents about eliminating the ARB. Mayor Jonathan Elmore suggested adding architecture review to the Planning and Zoning Board by adding one or two seats for people who have a design background.

Commissioner Lisa Shortell explained the recommendation to abolish the ARB came from the zoning audit, which suggested putting the architectural review guidelines into the zoning code. The Historic Preservation Commission, however, will retain their status as the review board for homes and business within the historic district, Bryant said.

“The PUD is in the code for really one reason, to provide the city itself kind of with a safety net for those types of developments that we can’t even envision right now,” Bryant said.

He assured the board these would be a rare occurrence as concerned have been raised regarding PUDs.

The zoning code also addresses development of community impact for projects greater than two acres that doesn’t seek an amendment or conditional use. These applications would go before the City Commission for project review, allowing the city to ensure projects are of the community’s interest, Bryant said.

Accessory Dwelling Units were important to the board and the community throughout the rewrite process. The city is recommending in the code that the setback requirement be 20 feet from other property lines so a structure doesn’t impact neighboring properties.

“In the zoning code, it is recommended that commercial development begin that break at 45 feet,” Bryant said.

Staff recommended this height in an effort to achieve a balance between human scale and what the market will bear.

“[Our contractors] believe that 45 foot breakpoint is the sweet spot and that’s what the market will bear,” Bryant said. “That keeps development both friendly to the community, but also friendly to the developers, so that we are a more attractive locale in which to develop.”

The city is hosting the final zoning rewrite open house tonight from 5:30 to 7:30 through Zoom.

— In other business, during the regular meeting the City Commission approved a couple contracts regarding stormwater, both with Brown and Caldwell. One is for support services with engineering, developing and contracting services of stormwater repairs.

The other contract is for Brown and Caldwell to assist the city with their annual MS4 report that is required by the state’s Environmental Protection Division.

— The City Commission also approved renovations to the existing public works building for up to $265,000. City staff plan to continue looking for a potential new facility for the department.

— Shortell also mentioned at the regular meeting that the city and a steering committee have begun working on the update to the city’s comprehensive plan.

— Additionally, the board discussed the residential sanitation fee at the work session. The general consensus was to contract with Lathum for recycling services, which the board will vote on at the next meeting.

Lathum changed their rate, effectively increasing the city’s residential fee from $508 to $565 to cover the cost of capital equipment and Lathum’s new rate.

A consideration was also made to consider switching garbage pick up from twice a week to once a week in an effort to not subsidize sanitation out of the general fund. The City Commission will continue to discuss the residential fee and has not made any decisions currently.

The City Commission will meet next on Wednesday, March 10, at 5:30 p.m. through Zoom.