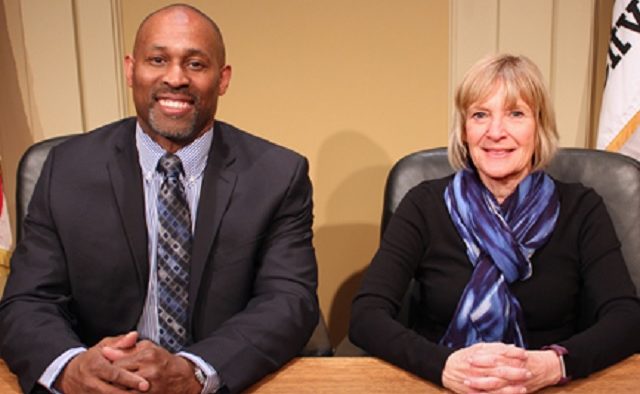 Decatur, GA — Decatur Mayor Patti Garrett and Mayor Pro Tem Tony Powers will be the featured guests on the Feb. 10 episode of the Decaturish Twitch Show.

The show broadcasts at 6 p.m. To watch the Feb. 10 episode click here.

Mayor Garrett was elected to the City Commission in 2009 and has been mayor since 2016.

“Patti is a graduate of Leadership DeKalb and the Atlanta Regional Commission’s Regional Leadership Institute,” her biography on the city of Decatur website says. “She served as Honorary Chair of the Islamic Speaker’s Bureau 2019 Gala which honored Women of Influence and has recently been named to the ISB Advisory Council. She has taught nutrition, provided nutrition counseling services, and worked as a Clinical Dietitian at Georgia State University and Emory University Health Services. She is interested in health policy, particularly related to access to healthy foods, equity, environmental policies, active lifestyles and the role of local government in fostering healthy, equitable and vibrant communities.”

Mayor Pro Tem Powers was elected to the City Commission in 2015.

“As a native of Decatur, Tony has served the Decatur community for many years. Tony grew up in the Oakhurst Community and is a proud graduate of Decatur High School,” this biography on the city of Decatur website says. Tony served as co-president of the Oakhurst Elementary School PTA from 2001-2002, was a founding member of the Decatur Education Foundation and served as chair of the Education Foundation from 2010-2012. He served as chair of the Housing Infill Task Force from 2007-2008 and joined the City Planning Commission in 2009. He served as Chair of the City Planning Commission, a position he held since 2012. He has been a member of the Board of Directors of the South Fork Conservancy since 2012. Tony was also honored with a Hometown Hero Award in 2002. Tony earned a degree in marketing from the University of Georgia and is a co-owner of Intown Ace Hardware. He and his wife Leisa live in the Great Lakes neighborhood, they have two daughters, Diondra and Alexandra and all are proud graduates of Decatur High School.”