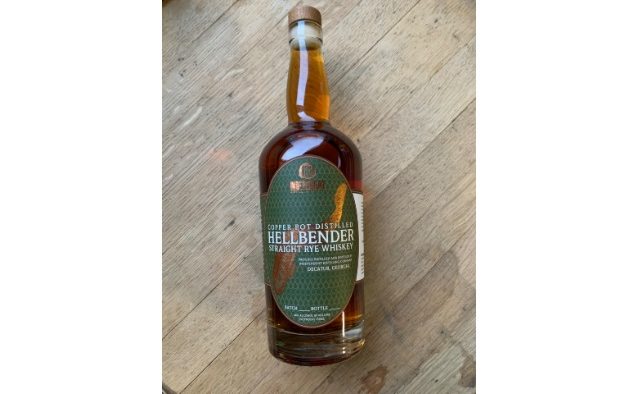 “Made from Georgia grown Rye and malted Wheat, Independent Hellbender Straight Rye Whiskey stands alone as a distinct spirit,” the company said in a press release. “Our process begins with locally sourced rye that is ground then blended with malted wheat for a long fermentation that is slowly distilled in our copper pot stills. We age this spirit in our Decatur distillery in new charred American White Oak barrels to create a beautiful Whiskey with true Georgia terroir.”

The flavor profile is described as “fruit-forward” and includes “plump ripe plum and cherry, dill, pumpernickel, and cocoa.”

“Working with local producers and creating spirits from their products has always been our goal at Independent Distilling” Owner/Distiller Michael Anderson said in a press release. “This was an exciting process working with a local farmer and using Georgia grown grain. The addition of the wheat makes our rye a distinct combination of grains that offers a spicy and delicate profiles for a beautifully balanced whiskey.”

Independent Distilling Company was established in 2014. It is located at  731 E. College Ave between New St and Sam St in the back of the building.

Anderson used his 100-gallon Copper Pot Still to hone his craft since opening in 2014. Decaturish also profiled him that year.

“The first product released was Hellbender Corn Whiskey made from locally sourced corn from Riverview Farms in Ranger, GA,” the press release from the company says. “Corn Whiskey is a southern tradition that has been lost by the main stream spirits producers but Michael has revived with enthusiasm.”

He expanded by adding white and barrel-aged rum to his products.

“The barrel aged rum is aged in new and used bourbon barrels and won Georgia’s Best Distilled Spirit in 2019,” the press release says. “Rum production was the first commercial spirit native to the Americas and IDC’s is made in the traditional way.”

The company released its Hellbender Bourbon in 2015, made from the same mash bill as the Corn Whiskey.

“It is aged in new charred American White Oak barrels for an average of 2 ½ years,” the press release says. “Each batch is distinct with slight variations from the wood contribution. The Bourbon begins with a great depth of oak and vanilla on the nose that is translated on the palate with hints of corn and burnt orange that finishes with rich baking spices.”