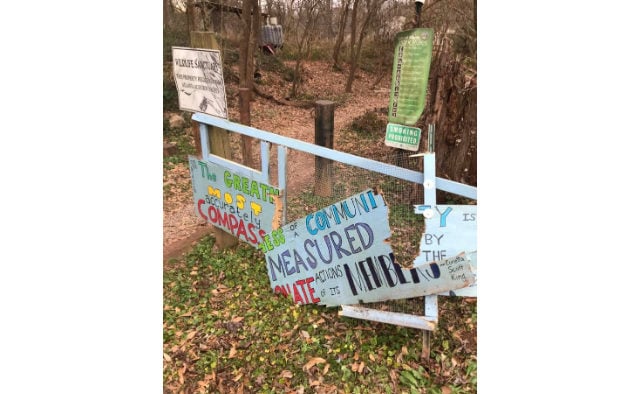 The Kirkwood Urban Forest was vandalized the night after a community cleanup in the popular neighborhood spot. (Photo courtesy Tina Mason Seetoo)
Share

Atlanta, GA — A vandal trashed the landscaping and tore up signs in the Kirkwood Urban Forest the night after the community came together to clean up the area as a service project for Martin Luther King, Jr. Day.

A homeless man who had made camp in the KUF was responsible for the vandalism, according to Kirkwood Neighbors Organization President Katie Kissel.

“He had been there before the cleanup,” she told Decaturish. “When people started to clean up more, he became a little more territorial.”

The incident ended up being one of Kirkwood’s first uses of Atlanta’s new Policing Alternatives & Diversion (PAD) Initiative. Some DeKalb County residents in Atlanta Police Department Zones 5 and 6 can now dial 311 to reach the program instead of calling the police for non-emergency services. A Harm Reduction team is dispatched to assist people in need with short-term care navigation, stabilizing supports and referrals to other service providers.

The KUF incident fit the bill for such services, according to Kissel.

“He is a person who obviously needs help and not everybody who needs help is able to accept it,” she said.

“We have a lot of different types of neighbors in Kirkwood and we love all our neighbors no matter where they live,” she added.

“Everything has been redone and we even added an extra picnic table that was donated by the Atlanta [Community] ToolBank, painted the picnic tables and were able to get everything looking better than it was before,” Kissel said.