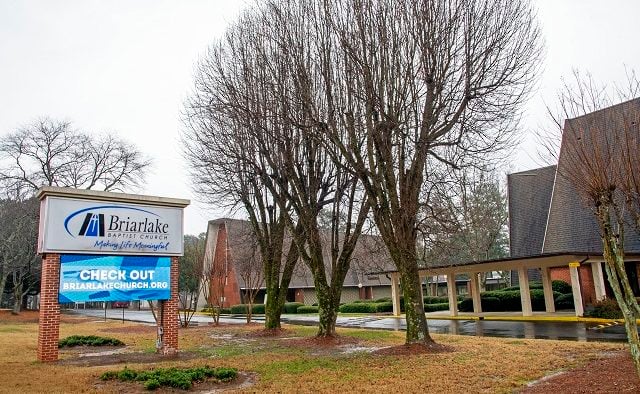 Briarlake Church is a Baptist church in greater Decatur, GA. The church's lead pastor, Tommy Ferrell, attended the "March to Save America" rally on Jan. 6. Photo by Dean Hesse.
Share

Greater Decatur, GA — Tommy Ferrell, the lead pastor at Briarlake Church in greater Decatur, announced on Sunday that he will be leaving his post and moving to Gwinnett County.

He served as pastor of the church for more than 16 years.

“In order to find a good in-person public school option for our youngest child, we are in the process of moving to Gwinnett County,” he wrote in a Facebook post.

He recently came under fire after he confirmed he attended the March to Save America Rally in Washington, D.C. on Jan. 6. He said he did not join the pro-Trump mob that stormed the Capitol that day and condemned the people who did.

The coup attempt, intended to stop the certification of President-elect Joe Biden’s Nov. 3 election win, resulted in the deaths of at least five people including a Capitol police officer who was beaten to death with a fire extinguisher.

Ferrell said he wasn’t there for that, doesn’t condone that, and was watching it while eating tacos in his hotel room. Ferrell mentioned that he attended the rally during a sermon he gave on Sunday, Jan. 10. He seemed to anticipate that his appearance would stir up controversy, which it did once local activists caught wind of photos on his Facebook account and began circulating them.

During his sermon, he noted his photo at the hotel was “time stamped” and proved he wasn’t there when the mob rushed the Capitol.

“I was sitting in bed with my feet up watching Fox News and said, ‘Oh lord help us, storming the Capitol,’” Ferrell said during his sermon. “I got it time stamped. I wasn’t there. They may come after me anyway.”

During the interview with Decaturish, he blamed the violence at the Capitol on QAnon supporters – followers of a vast and at times incomprehensible conspiracy theory – and Antifa, a left-wing group opposed to fascism. While QAnon followers were definitely there, a review by the Associated Press found that the mob was definitely pro-Trump and that there was “no indication” the violent actions were committed by members of Antifa in disguise. ABC news reported that President Trump and his allies planned the rally that led to the attack. Ferrell noted that it appears some people were let inside the building by Capitol police, which was also reported by NBC.

Ferrell, it should be noted, believes there’s evidence the election of Joe Biden was fraudulent, despite there being no evidence whatsoever that this is true.

“Much evidence was collected attesting to a fraudulent election. Many people believe that evidence was swept under the carpet by politicians, some judges, and media,” he said during the interview. “I think we should have had a ten-day inspection period beginning on Jan. 6, if there was nothing to hide.”

To read the full story regarding his attendance at the event, click here.

He did not reference the controversy in his announcement to his congregation about his departure. He said his last sermon will be on Feb. 14 and will feature a message of “love, support and unity.”

Here is his full announcement:

It is with a sense of calm, peace, and love for each one of you, that I relay my deep sense of assurance that it is the will of God for me to finish well my ministry as the Lead Pastor of Briarlake Church at this time. God’s ways are often mysterious, but He does not leave us without calm assurance and manifold blessings as we seek Him and respond to circumstances with prayer and faith.

Sixteen and a half years together in this manner have given us a mutual sense of appreciation for the goodness of God, what a people can accomplish with God’s blessing, and the wonderful way in which God provides and carries us along through good times and bad. Hundreds have been baptized, many more have been encouraged and challenged to serve Christ and grow in Him, churches from Atlanta to the ends of the earth have been strengthened and encouraged, and Briarlake Church is a light to it’s community and beyond!

In order to find a good in-person public school option for our youngest child, we are in the process of moving to Gwinnett County. I will appreciate a brief season of rest and prayerful calibration for future service, but am always committed to continuing the friendships we have made here and supporting the future development and ministries of Briarlake Church going forward. Thus, we will continue to serve God’s kingdom together.

You will be well led by the Briarlake Church Staff, and Jim Hersh as Senior Associate Pastor. In addition, Steve Parr, Director of the Gwinnett Baptist Association, will be available to provide counsel and suggest resources with regard to such things as the assembling and training of a Pastor Search Team.

My last Sunday in the pulpit with be February 14, 2021. I will bring an encouraging message of love, support, and unity.

With love and appreciation,