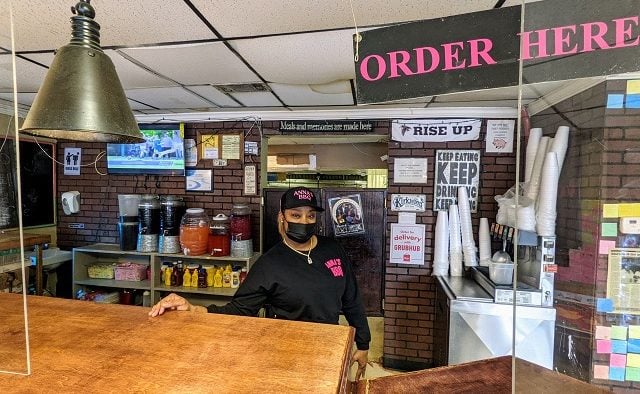 Inspired by her grandparents, Anna Phelps opened Anna's BBQ in Kirkwood, the neighborhood she grew up in, in 2013 to share her passion for cooking with others. Photo by Dan Whisenhunt
Share

Atlanta, GA – At about 5 a.m. each day, Anna Phelps fires up her smokers, gets food ready and cooks the meat and sides she needs for the day at her restaurant in Kirkwood, and cooks between 38 and 40 slabs of ribs.

She opened Anna’s BBQ eight years ago in the neighborhood she grew up in and was inspired by her grandparents. She previously described the restaurant as a hole in the wall place with a vintage style and old, rugged feel.

As a kid her grandparents would cook out on the grill every weekend to feed their large family.

One day as a young girl, Phelps’ grandfather had stepped away from the grill so she decided to try to flip the meat. She was hungry and ready for the food to be done.

“[He] came back and he was like, ‘girl, what are you doing?’ But actually I knew what I was doing. So he kind of stood back and let me do it,” Phelps said.

Her passion for cooking eventually let her to just jump in and open up a restaurant, which has become a family affair.

“I never had a restaurant or probably even worked in a restaurant,” Phelps said. “But I just jumped into it and decided I wanted to do it from where I was from. It’s a small quaint Southern style barbecue, family oriented.”

The first day of operation had some hiccups but Phelps’ family was there to assist her. She forgot to get a cash register before opening but then had a line of people in her parking lot. There was no turning back so she used a calculator that day.

Her parents were in the kitchen making orders and helping out.

“I ain’t going to never forget the first day we only cooked three slabs [of ribs] because I was like ‘I don’t even know if we’re going to sell the three slabs.’ I was kind of nervous and we ran out,” Phelps said. “They’ve been there since day one, back and forth.”

They also host a granddad’s cookout event every so often where Phelp’s dad will cook food in the parking lot on the grill. They were able to host the event a couple weeks ago after not doing so for about a year due to COVID-19.

He cooked ribeye steaks, lamb chops, baby back ribs and made a couple sides. Phelps said they ran out of that before she ran out of her usual menu items.

Her mom also bakes about 16 different cakes each week that have become a big seller.

One of the best-selling items is the Anna’s Favorite which is a pulled pork sandwich topped with coleslaw, BBQ sauce and pickles, “and of course the ribs,” Phelps said. 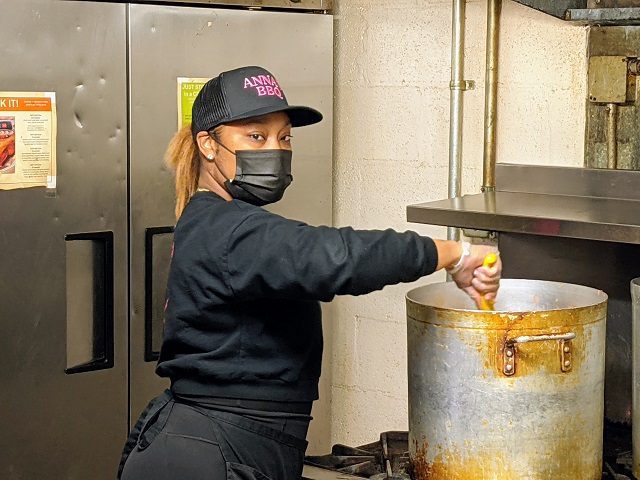 Anna Phelps stirs a pot of soup in the kitchen of Anna’s BBQ. Photo by Dan Whisenhunt

Anna’s BBQ has become a staple in the neighborhood. Before COVID-19, the restaurant would receive over 200 orders and had a crowd on the weekends.

But Phelps said they have done well given the coronavirus pandemic and still see a line of people waiting outside and wait times can be up to two hours.

She voluntarily shut down for two weeks earlier last year because she was nervous about the coronavirus pandemic. Although Phelps was never mandated to close and she had to shift to takeout orders only.

Customers can order from the restaurant through Uber, Doordash and Postmates which Phelps said is working well.

“We shut down for two weeks and then we went right back and we’re just doing take out only but take out is almost as good as dining in was for me. Because we’re still selling out every day,” Phelps said. “I just miss my customers. I missed the crowd coming on the inside.”

Phelps usually works in the kitchen but would come out to talk to customers. She knows quite a few of the customers since she grew up in Kirkwood and said she has never met a stranger due to her talkative personality.

“I think that’s the main part that I really like, the customers,” she said. “They will send flowers and different little things because they were happy. I guess they were so happy about the food and I would get cards saying ‘thank you for being in the neighborhood.’ So I think I established a good relationship with a lot of my customers.”

The restaurant requires customers to wear masks while picking up food and is doing contactless pick up. Phelps opens one door to the restaurant and has a table with a plexiglass barrier at the entrance. The plexiglass has a little window where they slide the food out of so there is no contact.

Anna’s BBQ is located at 1976 Hosea L Williams Drive N.E. It is open Tuesday through Saturday from noon to 6:30 p.m. and Sunday noon to 4:30 p.m. The restaurant is closed on Monday.