Decatur, GA — Goals as disparate as preserving the city’s greenspace, improving its communication channels, and keeping senior citizens in their homes are all included in Decatur’s new climate resilience plan, developed jointly with Agnes Scott College.

“Climate action is about reducing our carbon footprint,” Susan Kidd, the director of Agnes Scott’s Center for Sustainability, told the Decatur City Commission on Monday. “Climate resilience is about being prepared for the future impacts of climate change.”

Volunteers and staff from both the college and the city have been working together for the past two years on a climate resilience task force, which is becoming something of a model for similar efforts nationwide, Kidd said.

Kidd, David Nifong, a Lead for America fellow with City of Decatur Public Works, and Brittany Judson, a sustainable development consultant who served as the project’s coordinator, presented the draft resilience plan to the commission at a work session held just prior to their regularly scheduled meeting.

The task force included representatives from public safety, public health, human resources, public works, information technology, facility management, and environmental science who engaged in a visioning process to examine the community’s vulnerabilities across all of those areas.

The plan’s priorities coalesced into four main resilience goals: people, place, partnership, and planet, Judson said. For each of the goals, three or four strategies were recommended.

In some instances, a recommended strategy for resilience is something the city or college has already indicated is a priority, Judson said. 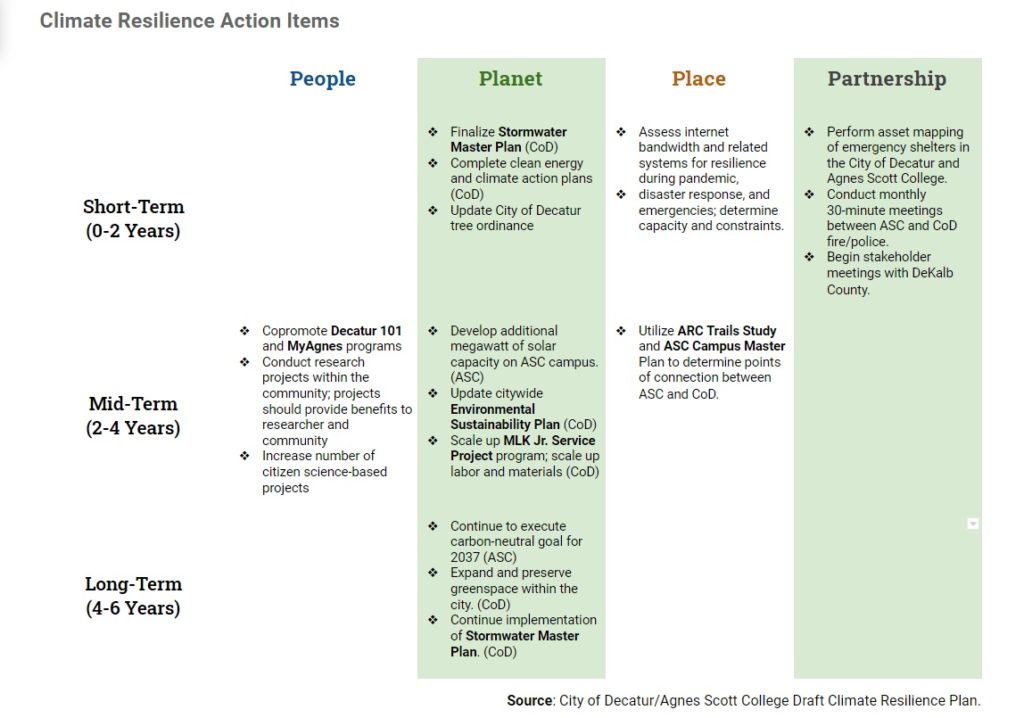 During the work session, Mayor Pro Tem Tony Powers noted that the strategy of helping senior citizens age in place has also been a priority of Decatur’s Affordable Housing Task Force and wondered whether there was other “low-hanging fruit” that the city could work on immediately.

“The climate resilience framework takes many things the city is working on [in different areas] and puts them together and makes sure you can see how they are related,” Judson said.

Nifong said that the task force would gather feedback on this draft of the plan from the commissioners and other sources at the city and college before finalizing the document later this month.

The task force will continue to meet regularly to check progress, he added. “One thing we don’t want is for this to be something we do and it’s finished. We will have regular meetings with the resilience task force to make sure that we follow through on the goals that we have set.”

During the commission’s regular meeting, several Decatur residents took the opportunity to opine that the city should take action to reach another piece of low-hanging climate resilience by revamping the city’s tree ordinance.

“Legally, right now you can substantially deforest much of our city without any permits required,” said Ash Miller, who lives on West Benson Street. “We need to pivot our conceptual approach to our tree ordinance away from tree removal and replanting toward tree conservation.”

The current ordinance allows property owners to cut down up to three trees a year without obtaining a permit and it allows people who remove mature trees to “replace” them by planting new saplings or by paying into a fund, he added.

Newly planted trees take years to mature and provide the same environmental benefits as existing mature trees, Miller said. “We need to make it not legal to undermine our own values. We need an ordinance that protects the canopy we have now.”

Jennifer Hogan, who lives on Chelsea Drive, said her property has been adversely affected by an adjacent property owner’s removal of 18 trees at once.

“Now I have streams running through my backyard every time it rains,” Hogan said. “I live in fear of every rainstorm that my basement is going to end up flooding again.”

Ben Bell, of Scott Boulevard who is also with the group Save Decatur’s Trees, said that the ordinance did not include sufficient penalties for removing trees without a permit and did not include protection for boundary trees on neighboring properties that die as a result of construction damage to its root system.

“Boundary trees should be protected, You should not be able to kill your neighbor’s trees,” Bell said. “The existing penalties for violations of the ordinance are negligible and don’t deter illegal cutting.”

-Director of Planning and Economic Development Angela Threadgill announced that the next session of the Decatur 202 speaker series would be held via Zoom on Feb. 11 from 6 to 8 p.m. and focus on climate change. For more information, and to register online, visit Decatur2030.com.

– Assistant City Manager David Junger announced that the city’s annual Arbor Day Celebration would be a “drive-through” event held at Legacy Park on Saturday, Feb. 20. Decatur residents will be able to reserve a free tree in advance and pick it up at the event. More details will be announced closer to the date.

-Decatur Mayor Patti Garrett read a proclamation in support of the planned memorial for the late Congressman John Lewis to be placed on the property of the historic DeKalb County Courthouse on the Decatur square (now the DeKalb County History Center).

-The commission voted unanimously to approve the renewal of the annual contract with KCI Technologies of Duluth for monthly traffic signal inspection and monitoring. The contracted amount is not to exceed $43,200.

-The commission voted unanimously to approve a change order for the city’s contract with Blount Construction for additional repaving work along South Columbia Drive. The change would add $29,000 to their current contract to include grading and paving on Hampton Lane from Beaumont Avenue approximately 130 feet south, and on a public alley between Second and Third Avenue from Gordon Street approximately 160 feet south. The work in both locations will address problems with gravel washing out during rainstorms that adversely impacts the road and the city’s stormwater infrastructure.