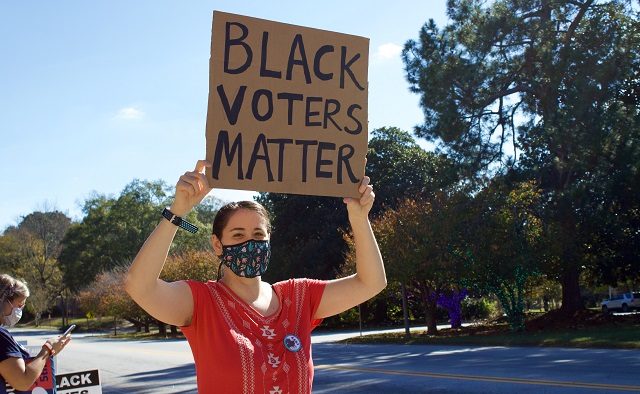 Avondale Estates resident Maya Cross showed her support for Black Lives Matter at the Avondale Alliance for Racial Justice get out the vote event on Saturday, Nov. 21, at the intersection of North Avondale Road and Clarendon Avenue. Photo by Zoe Seiler.
Share

Atlanta, GA — Alarm bells are going off for groups across DeKalb County critical of legislation intended to suppress voting. The legislation was introduced last week in the Georgia House of Representatives.

House Bill 531 stands to change laws on drop box availability, Sunday in-person voting, and early submittal of absentee votes. It’s one of approximately 30 pieces of about voting in Georgia, according to the Georgia Legislative Black Caucus Policy Committee.

“The 2020 election had a profound impact on our state. In the midst of COVID-19, more than 5 million citizens voted by absentee ballot, early voting or in-person on Election Day,” the Legislative Black Caucus Policy Committee said in a press release. “It was a great display of civic responsibility and an even greater display of county election officials offering unprecedented service to ensure votes were cast safely and securely.

“We now face numerous bills to either expand voting access or constrict it. Our criteria for supporting or opposing legislation, whether it pertains to voting, education or health care, is centered on improving the lives of Black people and protecting their civil and human rights.”

House Bill 531 has been called “hastily drafted” by the Coalition for Good Governance, who is currently suing the state over electronic, touchscreen voting machines. Executive director Marilyn Marks said the machines are vulnerable to tampering.

State Sen. Elena Parent, who last week introduced Senate Bill 186 to reform the redistricting process and prevent gerrymandering, said of HB 531, there was “no way for Georgians to watch their government grapple with this highly significant issue.”

Parent specifically asked if the sub-committee meetings were livestreamed, and the answer was yes, she said. In her 10-year tenure, she said she has never seen a hearing begin at 7 a.m. But when her office reached out to the senate press and office of the ethics committee chairman to verify access to the public, she never received a confirmation. Parent said it was unacceptable that neither office had the courtesy to respond.

Georgia Legislative Navigator is a good source to follow legislation. Currently, 16 bills on voting are in the Georgia House and Senate.

As more and more Democrats and voter rights groups testify to preserve absentee and early voting, Parent has pushed to give citizens more of a voice in redistricting and to end gerrymandering, the practice of drawing legislative districts to benefit one party.

“As Georgia enters the once-a-decade process of drawing new districts for Congress, the state legislature, and elected officials across the state, we must reform the secretive and partisan process that has characterized redistricting through the decades,” said Parent. “Under current law, Georgia’s legislators are able to draw districts in a way that serves their party and their own power, rather than the people. Moreover, legislators are able to draw partisan maps behind closed doors, which prevents the public from holding them accountable. Georgians are understandably frustrated by a process that dilutes the power of their votes and skews electoral votes and public policy.”

Andrea Young, Executive Director of the ACLU of Georgia added, “The principle of voter rights is that everyone’s vote should count the same. Georgia has a history of privileging the votes of some communities over others. The Transparency Act brings sunshine to a process that has historically allowed politicians to meet in secret and manipulate the boundaries of legislative districts to their own benefit.”

Nancy Flake Johnson, president of the Urban League of Greater Atlanta, while testifying at the Special Committee on Election Integrity Feb. 19 said the voter suppression legislation being considered now will disenfranchise voters.

“From the white primaries, poll taxes and literacy tests, to the more recent purging of legitimate voters from the rolls for simply choosing not to exercise their right to vote, limiting early voting and locations of drop boxes. From forcing voters to wait in long lines, to disqualifying people through strict exact match signature requirements, this is history that has preceded us here in our state,” Johnson said. “Now, you are considering ways to make it more difficult for people to exercise their right to vote.”

Voters can learn more about HB 531, and how to protect their rights, in a virtual forum. Members of the DeKalb House and Senate Delegation, co-chaired by State Representative Karla Drenner (D-Avondale Estates) and State Senator Emanuel Jones (D-Decatur), will host a “Protect Your Voting Rights” on Tuesday, February 23, at 6:30 p.m. via Zoom and Facebook live stream, a press release said.

Registration via Zoom is strongly encouraged; to register for the Zoom meeting, please click here.

“The Georgia Legislative Black Caucus Policy Committee was established by State Senator Tonya P. Anderson (D-Lithonia), chair of the GLBC, to monitor and take action on legislation that is impactful to Black Georgians and other communities of concern. Those of us entrusted with this enormous responsibility do not take it lightly. It is important for our constituents to see their caucus working in one accord to protect their interests.

“We believe it necessary to speak about the flurry of legislation being introduced in both chambers on voting and elections. Since the last count, there are approximately 30 bills addressing an array of these topics.

“The 2020 election had a profound impact on our state. In the midst of COVID-19, more than 5 million citizens voted by absentee ballot, early voting or in-person on Election Day. It was a great display of civic responsibility and an even greater display of county election officials offering unprecedented service to ensure votes were cast safely and securely.

“We now face numerous bills to either expand voting access or constrict it. Our criteria for supporting or opposing legislation, whether it pertains to voting, education or health care, is centered on improving the lives of Black people and protecting their civil and human rights.

“We are encouraged by the numerous bills which seek to expand voting access, like House Bill 113, which was introduced by GLBC member State Representative Kimberly  Alexander (D-Hiram). If passed and enacted, it would allow eligible voters to register and vote on the same day. HB 113 can increase voter turnout, especially for low income and communities of color, remedy inaccurate voter rolls and reduce the need for provisional balloting. For these reasons, we strongly support HB 113.

“We have also seen numerous bills claiming to add greater security and protections to our elections. These measures, in our opinion, are not based on any objective, data driven, evidence-based assessment of the issue but solely with the intention to undermine Black voters and other communities of concern.

“To date, there has been no substantive information provided to warrant such drastic action nor have we received any indication as to what implementation will cost our counties. We do not even have clarity if these measures pass state and federal constitutional muster. As a committee, we are in agreement that these bills are a blatant attempt to ensure that the 2020 election cycle was an aberration and not a reflection of our political future – future where Black voters will be prominent and relevant.

“Moving forward, we intend to aggressively oppose legislation that undermines Black voter participation, while being equally aggressive in our support of measures that advance the democratization of our elections.”