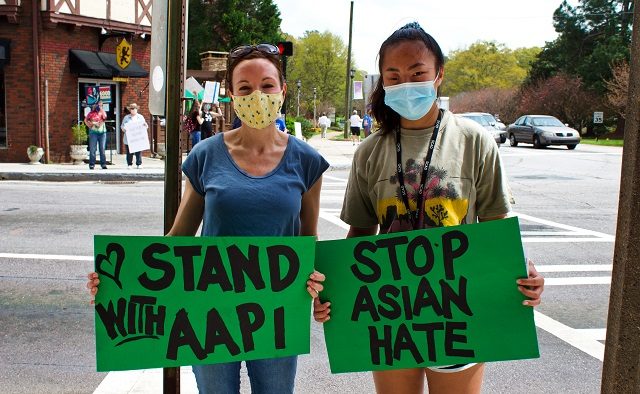 Avondale Estates, GA — On a hot, sunny day Clarkston resident Elvie Balagot sported a long sleeve, black shirt with a logo of her alma mater in the Philippines.

She wanted passersby to know she is part of the Asian American and Pacific Islander community as she held up a sign during the Avondale Alliance for Racial Justice’s rally on Saturday, March 27.

About 30 people gathered at the intersection of North Avondale Road and Clarendon Avenue to protest against the recent violence and hate following the recent murders of eight people at three massage parlors in metro Atlanta. Six of the eight victims were Asian women. The protesters also held up signs against a recent voter suppression bill signed by Gov. Brian Kemp. 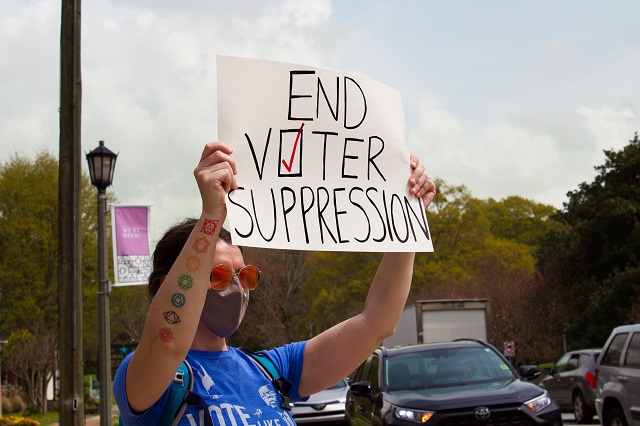 Ashley Cocchi-Miller advocates for voting rights and an end to voter suppression at the protest hosted by the Avondale Alliance for Racial Justice on Saturday, March 27, along North Avondale Road. Photo by Zoe Seiler.

The killings occurred amid a recent wave of attacks against the AAPI community that has coincided with the spread of the coronavirus across the country. It also brought renewed attention to alleged hate crimes against Asian Americans, the Atlanta Journal-Constitution reported.

“I am AAPI,” Balagot said. “I am a naturalized citizen and I do not like what people are doing to my people. It’s time that we are seen as a people. We are contributing members of this society. So yes I am angry and I am out here to show my support.”

“I want to stand for my people and to support what’s happening,” DeKalb County resident Hope Tubesing, 16, added.

Those who attended the rally hoped to inform others and raise awareness about the issues the AAPI community faces.

“I’m out here to show my support because people really are not educated on AAPI,” Balagot said. “They see us as different. They keep seeing us as the foreigner and many of the AAPIs were born here. They are legitimate citizens and they are contributing members of society. We are a race. We are a people.” 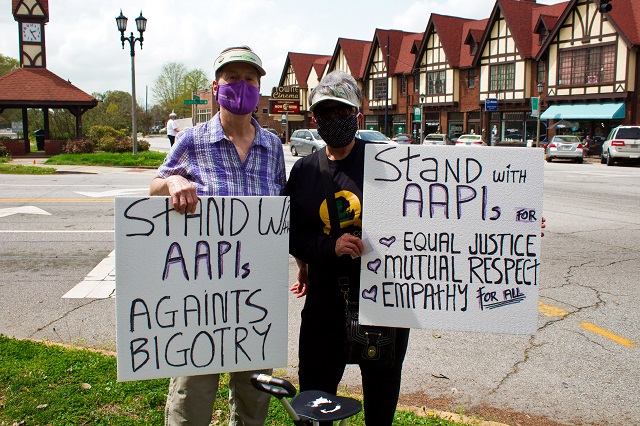 Clarkston residents Jo Hamby and Elvie Balagot protested with the Avondale Alliance for Racial Justice on Saturday, March 27. Balagot wanted to show her support for her community and stand up against violence. Photo by Zoe Seiler.

Moving forward, Balagot hopes for equal justice, mutual respect and empathy for everybody, including the AAPI community.

AARJ member Carol Calvert also hopes the man arrested in the spa shootings is charged with hate crimes in addition to the murder charges.

“We feel it is critical to call out the clear racist targeting of these Asian spas and the AAPI women who lost their lives and to signal strongly that we will not tolerate racism-fueled violence,” Calvert said. “The focus of law enforcement on what the white murderer said was his motive rather than the very clear picture he painted with his actions is just more evidence of our society’s centering on and giving more value to the white world view.”

The AARJ also encourages people to consider supporting the survivors and victims’ families through a GoFundMe fundraiser.

Tubesing added that it’s nice to see the younger generation being educated about the issues and showing their support.

AARJ member Candice McKinley brought two of her teenagers to the event and all held signs advocating for voting rights and equality.

“Kids don’t understand from a point of view that actually being out here can make a difference and always being on social media is not getting you nowhere. It’s not helping,” Cailyn McKinley, 15, said. “You have to actually put the word out. You can repost something all you want but actually coming and supporting your community is what makes a change.”

She hopes people will do their research to understand what and why things are happening so they can make a difference.

“You getting out and showing that you care makes a big impact on your life and others because not everybody can come out and do what the younger people, the younger generation can do. Just come out and make a difference,” Cailyn said.

“We believe the new Georgia voting law is a new version of Jim Crow,” AARJ member Lisa Cottrell said in an email. “We urge people to demand Congress to pass the Voter Protection Act and the Senate to pass S1 the For the People Act to protect voting rights.”

Among the changes to absentee voting is a new ID requirement for requesting and returning a ballot: either one’s driver’s license number, state ID number, or a copy of an acceptable voter ID.

Absentee ballot drop boxes are now officially part of state law, but saw some changes. All counties will be required to have at least one drop box and the number of boxes is capped at one per 100,000 active voters or one for every early voting site, whichever is smaller. Drop boxes will also be moved inside voting sites instead of outside on government property, GPB reported.

While Kemp was speaking and signing the bill into law, State Rep. Park Cannon was knocking on the door of his office. Cannon continued to knock after being told not to and after an exchange of words and another attempt to knock on the door, she was arrested, 11Alive reported.

“Last night I saw the representative, Park Cannon, be arrested and then I saw the photograph of the governor signing into law a very repressive bill in front of a plantation with six other white men,” McKinley said. “The dichotomy was just ridiculous and if that doesn’t speak volumes to what’s really happening then I don’t know what is so the laws matter. Leadership matters.”

McKinley and Cailyn both mentioned the importance of voting and protecting the right to vote.

“People didn’t fight for our rights just so we don’t take advantage of them. All of that adds up at the end of the day,” Cailyn said.

“For me, it was the fact that Georgia was very closely investigated during the election and they really didn’t find evidence of voter fraud,” Katy said. “So it seems like this law is designed, supposedly, in word, to stop something that wasn’t actually occurring.”

She added that the legislation seems to target people who live in lower income areas and people of color.

“It seems like a step backwards,” Katy said. “Instead of helping more people vote it seems like it’s trying to keep people from voting.”