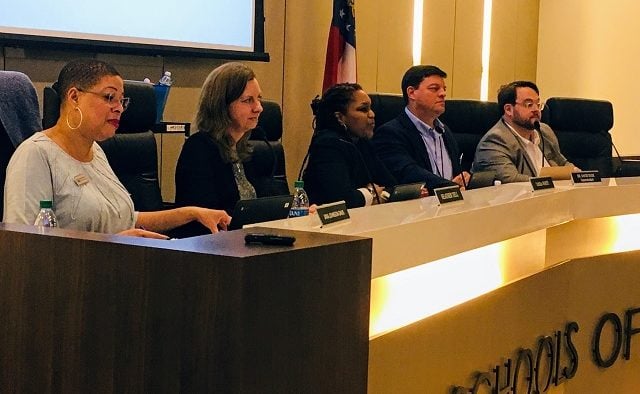 Decatur, GA — The Decatur School Board plans to hire an investigator to look into credible allegations that Superintendent David Dude was frequently absent but did not record his absences as vacations.

But two groups advocating for students and parents of color says the School Board must commit to making the findings public. The Beacon Hill Black Alliance for Human Rights shared its letter to the School Board with Decaturish. It was co-signed by the Black Parent Alliance.

“We have reviewed your public statement, which was issued on Friday, March 12th,” the letter says. “Unfortunately, based on our experience with City Schools of Decatur we have some profoundly serious concerns that remain. We are requesting that you make a written commitment that the findings from your independent investigation be made a matter of public record. The allegations of ethical and financial impropriety that have recently been raised require complete transparency. It is critical that parents, students, and taxpayers have access to the evidence gathered by the investigator. We will await your prompt response to this request. It is imperative that this commitment is made in an effort to help restore confidence in our school district officials.”

The Beacon Hill Black Alliance for Human rights is co-chaired by attorney Mawuli Davis, the husband of School Board member Jana Johnson-Davis.

Beacon Hill is the first civic group in Decatur to issue a statement about the allegations. Members of the Decatur City Commission have declined to comment as have members of the Decatur Education Foundation, the nonprofit group that supports children in the city of Decatur.

School Board Chair Tasha White did not immediately respond to a request for comments. For weeks, board members have declined to directly respond to questions raised by Decaturish.com in its investigation into these allegations.

Public records show Dude received $100,000 in additional compensation for cashing out the vacation days he said he didn’t use. He’s allowed to cash out 30 of his unused days, according to his current contract.

David Adams, the school district’s former human resources officer, alleges in a lawsuit that Dude pushed him and former finance Director Susan Hurst out of the district after they raised questions about his time away from the office. They allege he violated of the Code of Ethics for Government Service. Misuse and misreporting of public funds would be a violation of the Georgia Professional Code of Ethics for Educators, according to the lawsuit.

The lawsuit says Dude is required to work 255 days per academic year.

“Defendant Dude was reporting taking nominal time off per year to the CSD Board, but was actually taking six to seven weeks off from work entirely during the summers, in addition to being gone on non-work district holidays,” the lawsuit says. “Defendant Dude worked less than even the employees whose contracts were for 220 days per year.”

However, upon reviewing his contracts, Decaturish was unable to find any language specifying the number of days Dude is required to work or what days he’s entitled to take off without recording it as vacation time. The School Board in its March 12 statement said Dude is not required to work all days in a year aside from federal holidays. The School Board says he’s allowed to take time off during holiday weeks, like spring break, without recording that time off as vacation time. But notably the board did not say whether it expects Dude to work during the summer months like other superintendents.

If Dude is off when the rest of the district is closed, that would be the same off days given to teachers who work 190 days in a school year, time that does not include Spring Break and holiday breaks. But other central office employees work longer than teachers. Salary schedules posted on the school district’s website show other employees of central office work 225 days a year. The formula for Dude’s vacation pay-outs is based on prevailing daily rate for 251 days.

His contract says, “For the purposes of this agreement and any amendments hereto, ‘prevailing daily rate’ is defined as the superintendent’s daily rate calculated by dividing the superintendent’s annual salary in the given year by 251 days (i.e., 365 days a year minus 104 weekend days, minus 10 federal holidays.)”

This is the formula Dude cited in a memo to then-board chair Lewis Jones when requesting his Fiscal Year 2020 vacation pay out. 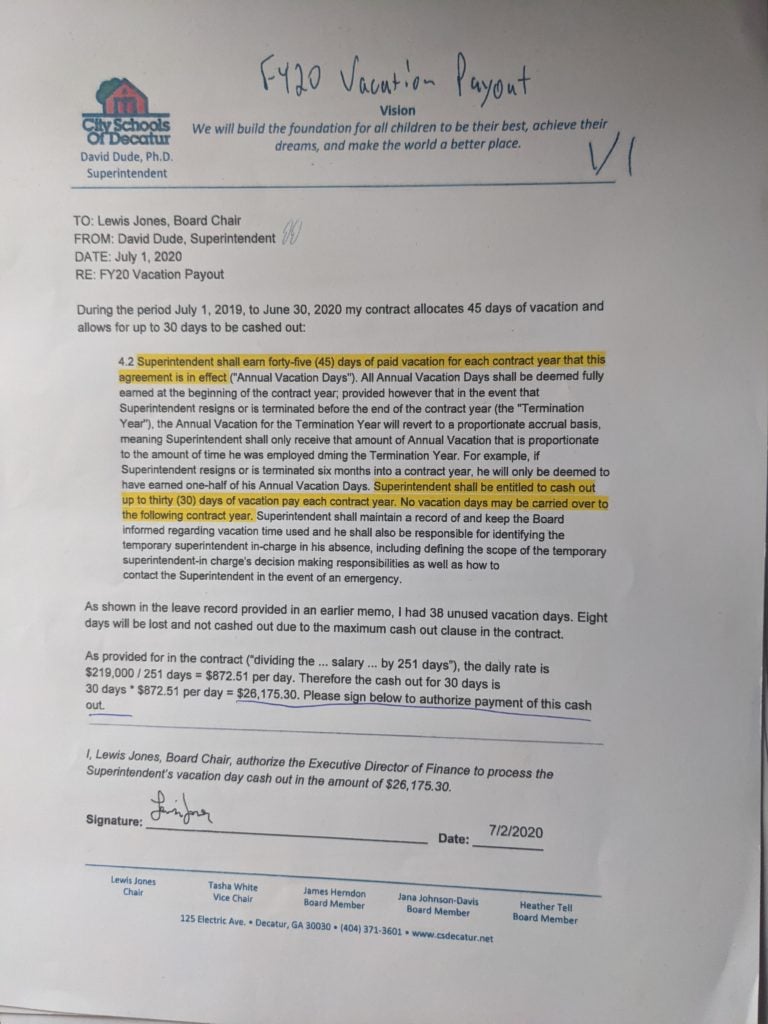 Decaturish sent the following question to the board:

The School Board has not responded to a list of two dozen questions from Decaturish regarding Dude’s use of vacation days.

In response to our investigation, the board also rescinded Dude’s most recent contract renewal, which would’ve gone into effect July 1. That contract appeared to make firing Dude for cause more difficult and made it more expensive to fire him for the board’s convenience. The School Board says the contract is being renegotiated.

Decaturish has asked whether the board intends to wait for the investigator’s conclusions before deciding whether to sign off on Dude’s revised contract. 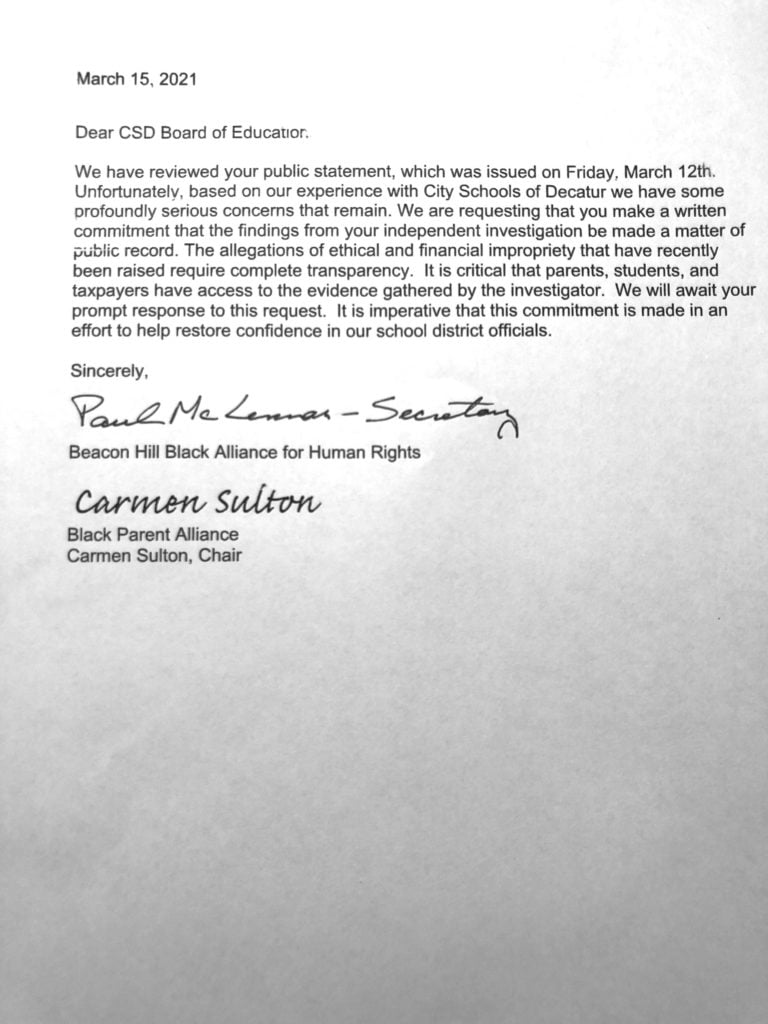