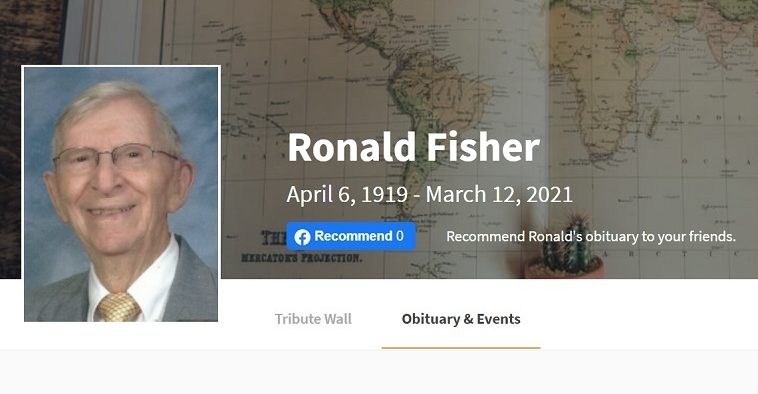 While living that long is newsworthy on its own merits, his obituary offers a colorful glimpse into Decatur’s history. At one point Decatur had a trolley line that used to wind its way through Cabbagetown and Kirkwood to Agnes Scott college in Decatur, according to the PATH Foundation. The old trolley line is now known as the Trolley Trail.

According to Fisher’s obituary, that trolley provided entertainment back in the day.

“Ronald often recounted an incident when he and his brothers would soap the trolley tracks from Atlanta in front of Agnes Scott College, then climb a tall oak tree,” his obituary says. “As the trolley would come in, the boys would shake a limb over the electrical wire, causing the trolley to be disconnected to the line. The trolley would then slide back down the hill toward Atlanta.”

Train-museum.org has a lengthy write-up about the trolley to Decatur, which ended in 1948.

“In the first half of the 20th century travel in cities usually meant taking transit, oftentimes by streetcar, or as it was colloquially known, the ‘trolley.’ In Atlanta the trolley system was operated by the Georgia Power Company,” the website says. “Georgia Power traces its roots to the ‘Second Battle of Atlanta’ between trolley monopolies that fought to control the streetcar system in Atlanta. Joel Hurt’s Atlanta Consolidated Streetcar Railway Company and the Atlanta Rapid Transit Company headed by Henry Atkinson controlled almost all of the lines in the city, with competing parallel lines sometimes only a block apart.”

The Train-museum.org website also notes that, “One of the compromises in order to gain required approval from all of the jurisdictions for the merger included promising the City of Decatur a perpetual 5¢ fare in return for abandoning the North Decatur Line, redundant to the other two lines serving Decatur. Georgia Power made the same deal with College Park and this would come to haunt the company when several years later fares went up in Atlanta to 7¢ but not on the lines to the suburbs. As a result service to Decatur was different than other lines, since it charged only 5¢ and was required to operate two man cars with conductors.”

One streetcar from this era survived, according to the website.

“Streetcar #269 in the collection of the Southeastern Railway Museum is the only known survivor of a Decatur Streetcar and one of only a handful of surviving Georgia Power streetcars,” the website said. “It was sold after the end of streetcar service for use as a house in Hiram Georgia, where it was discovered by SRM volunteers in February 2002 and recovered to the museum later that year.”

There are plans to eventually restore and display the streetcar.

He was born in a house in Atlanta’s Kirkwood neighborhood and grew up on Adams Street.

“The family was well loved in the neighborhood, but the Fisher boys were known for their sometimes-mischievous antics,” the obituary notes, hence the trolley shenanigans.

“Both were active members of Decatur First Baptist Church,” his obituary says. “Ronald and Nettie purchased their Scott Boulevard home in 1949 before the road was paved. For the rest of their marriage, they lived in this home where they raised three children. Ronald served in the United States Navy during World War II and was happy to come home after landing Marines on the beach of Nagasaki, five days after the United States dropped the atomic bomb. After the war he began his career as the credit manager of Walthour & Hood, an Atlanta wholesale sporting goods company serving the Southeastern United States. His children had some of the best toys in the neighborhood!”