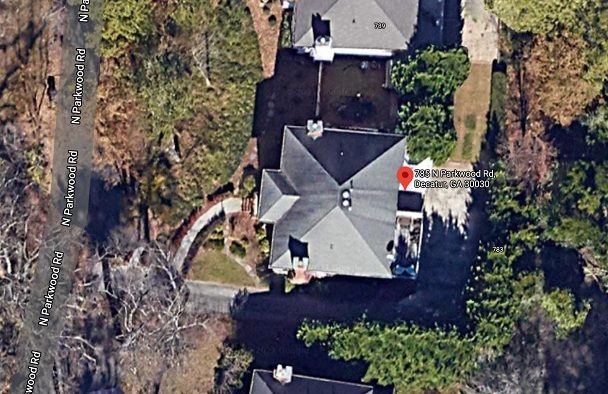 Decatur, GA — A Decatur resident’s plan to sell half of his duplex as a separate townhome hit a roadblock Tuesday night at the regular meeting of the city’s Planning Commission.

Jeff Allen has owned a duplex at 783 and 785 North Parkwood Road for 20 years but now wants out of the landlord business.

“I live here now and want to sell off the neighboring unit and keep living in the unit I am living in,” Allen told the commission. “I don’t want to have any more tenants and would like to have an owner living next door. I feel like it would be a benefit to the city to have another affordable single-family residence and to the neighborhood to have another owner-occupied dwelling and fewer tenants.”

There is precedent for such an arrangement, he said, noting that a former apartment building also on Parkwood has been converted into a condominium, as has a triplex also on the street.

His building is already divided into two residences, with separate garages and house numbers, as well as additional off-street parking for guests.

“There would be no structural changes to the building in any way and no difference, as far as I can tell, in the impact to the neighborhood,” Allen added.

Two individual townhomes at that site would not meet the minimum street frontage requirements as well as other conditions required under R-60 zoning and the property’s existing low-density residential land use designation.

Two nearby residents spoke in opposition to Allen’s request saying they feared that changing the zoning would allow much denser future development in the middle of the neighborhood.

“If you change the zoning to multi-family on one [lot] what happens when others want to do it?” wondered Susan Kenny, who also lives on North Parkwood. “That makes this attractive to a developer who sees multi-family zoning and wants to buy them up.”

There are currently seven duplexes on the street that could potentially become apartment buildings if their owners also decided to pursue rezoning.

“I am worried this would be opening the door for very dense housing on a street that already has traffic and flooding issues,” she said. “We are not looking for that kind of density on this street.”

“What I am concerned about is the possible precedent that could be set when we rezone a standard R-60 lot that is in the middle of a neighborhood from a standard R designation to a RM designation,” Commission Vice Chair Mike Travis said.

If Allen one day sells his property, the new owner would be able to tear the existing structure down and put up to seven units on the lot under the new zoning.

A developer would also have a strong argument for rezoning adjacent parcels to the higher density.

Travis wondered whether Allen would consider setting up the building as a two-unit condominium, which would not require changing the property line or zoning.

Establishing a condominium is a much more complicated process than just dividing the property in two pieces, Allen noted. It would require the establishment of a homeowners association to manage the common outdoor areas.

“It would also prevent the other owner from having a yard, which they might want,” he said.

But, he said he understood the neighbors’ concerns and would like to avoid the need to seek a rezoning anyway.

The dilemma highlights one of the key challenges facing Decatur as it attempts to encourage the development of more affordable housing inside the city limits. Although many of its older neighborhoods once held a variety of housing types—zoning changes made in the 1980s effectively eliminated denser housing options in favor of allowing only single-family homes. This has contributed to the rapid rise in Decatur’s housing prices, which are now unaffordable for the majority of the region’s residents.

“I understand what he is trying to do, and it certainly helps with affordable housing initiatives,” Travis said during the meeting. “He is trying to create a way to have an end-user owner in that secondary unit.”

Travis suggested that Allen work with city staff to explore other options to accomplish what he wants to do without needing to rezone the property.

At Allen’s request, the commission voted to table the request and until Allen returned to proceed at a future meeting.