Update March 31, 1:33 p.m. : The Legislature is now considering a version of the bill that would grant the senior tax cut for two years. The School Board asked for five. This is a developing situation. Check back for updates. Here is our earlier story….

Decatur, GA — School Board members are antsy about the fate of a bill to renew and reform a tax break for the city’s seniors.

Senate Bill 292 was approved by the Decatur School Board back in December. School Board members on March 30 signed a letter urging the Legislature to pass the bill.

“It would be devastating to many of our senior citizens for the senior homestead exemption to lapse, even if just for a year,” the letter says.

School Board member James Herndon, who shared the letter with Decaturish, said there’s some doubt about whether that bill will ultimately pass.

“It seems to be in jeopardy, though I’m unsure why,” he said in March 30 email. “Tomorrow is the last day of session and it hasn’t passed. We really want the bill and think it is a no-brainer for helping seniors in Decatur.  My fears are that politics over the annexation bill – which we also want to see passed and worked with Dekalb on – are somehow tying it up.”

The other bill regarding annexations is Senate Bill 293. The annexation bill is intended to resolve disputes over school district boundaries when annexations occur. It has passed both the House and Senate and awaits Gov. Brian Kemp’s signature.

Senate Bill 292, the senior tax break bill, is intended to replace an existing unlimited tax break, called a homestead tax exemption, for all seniors 65 and older that went into effect in 2016 and will sunset in 2021.

In addition, the School Board had hoped that the exemption would slow enrollment increases by encouraging seniors to stay in Decatur rather than selling their homes. A subsequent study conducted by Georgia State University indicated that the exemption did not have that effect.

The CSD Board formed a committee which held its first meeting in April of 2020.  The committee’s charge was to come up with an alternative that would stay within the original budget of $1.2 million over existing exemptions so that it will cost the district in aggregate no more than $4.3 million.

In order to preserve as much tax relief as possible for economically vulnerable seniors, the committee suggested creating two separate exemptions with different requirements based on age.

If the senior tax break bill is passed by the Legislature and signed by the governor, it must be approved by voters in November 2021 before going into effect in 2022. 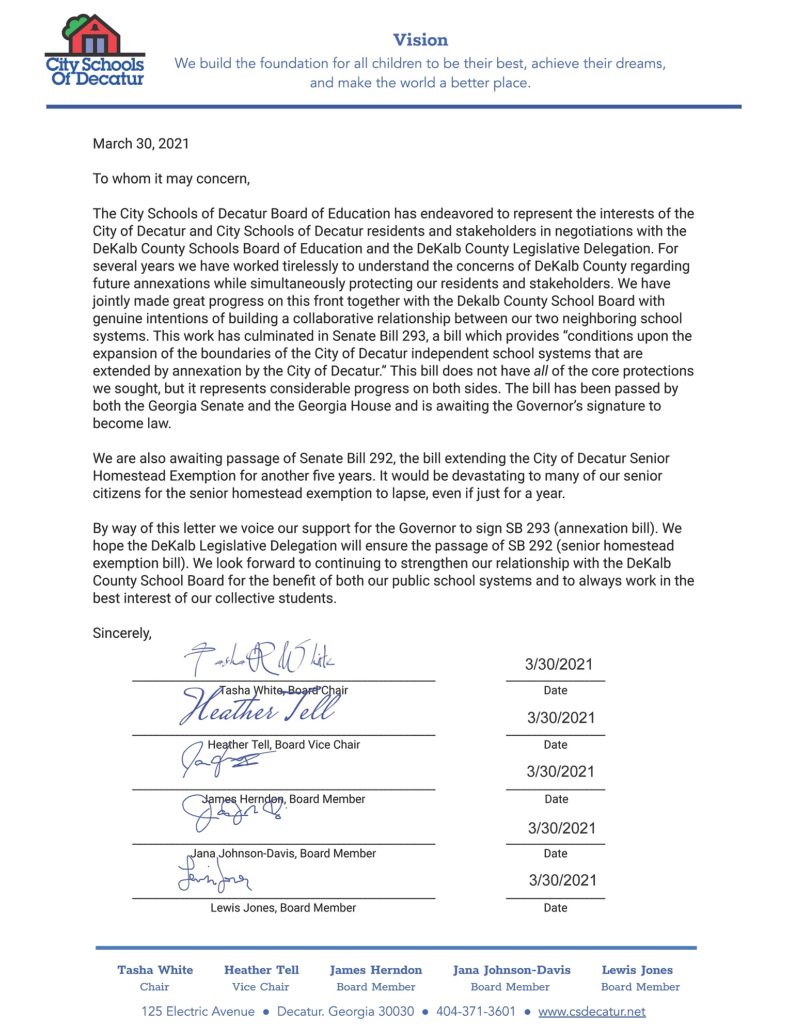