Decatur superintendent’s PSC certification lapsed in June, was renewed and backdated in October

Decatur superintendent’s PSC certification lapsed in June, was renewed and backdated in October

Decatur, GA — Superintendent David Dude’s current contract is clear: Dude is required to be certified by the Georgia Professional Standards Commission, the organization that certifies educators.

If he doesn’t hold this certification, he can be fired for cause, according to the terms of his contract. However, public records show that Dude’s certification lapsed on June 30, 2020. The PSC didn’t renew his certificate until October 27, 2020, and backdated his certification so it would be in effect as of July 1, 2020. 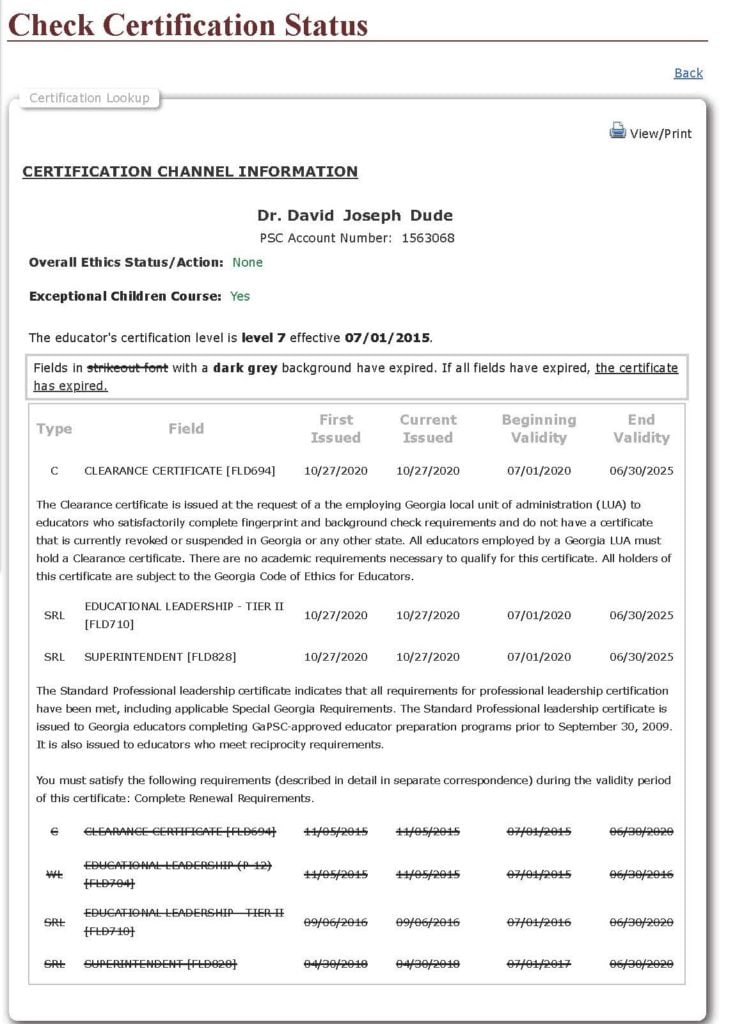 A spokesperson for the PSC said, “Decatur City Schools did not apply for his renewal until 10/27/20 and it is our normal process to backdate to the beginning of the fiscal year (July 1) if the educator meets renewal requirements at or before that date.”

Dude’s contract makes it clear that maintaining this certification is a condition of Dude’s employment with the district. A spokesperson for the Decatur School Board said the delayed certification was due to COVID-19.

“You are correct that his paperwork was submitted in October and applied retroactively to July,” spokesperson Courtney Burnett said. “Our district supports our certified employees with their PSC certifications and renewals. Due to COVID, several reporting periods were canceled, so some of the paperwork for Dr. Dude and other employees was submitted in October instead of July. We strive to keep all employees’ certifications current, but there are times when things like this happen and the PSC works with us to ensure our employees’ certifications and renewals are complete.”

The School Board and Dude have for weeks declined to answer questions raised by a Decaturish investigation into whether Dude gone in excess of the vacation days he recorded in the district’s payroll system.

Burnett said those answers may not come until the end of April.

“The board recognizes that on March 16, we shared that, ‘The board has received your questions and they will respond after their executive session meeting next Tuesday.’ Unfortunately, we are not yet able to provide such a response,” Burnett said. “We will endeavor to get you a response no later than the day after our next meeting (April 21).”

Under the “Duties of Employment” section of Dude’s current contract, the first line says, “In addition to any other warranties and representations made in this agreement, superintendent hereby represents and warrants that he is of good moral character, and is currently certified by the Professional Standards Commission.”

The next line under the “Duties of Employment” section says, in part, “Superintendent shall be certified and classified by the Professional Standards Commission and shall hold and produce upon request a valid certificate issued by the state of Georgia.”

The contract says that if Dude doesn’t maintain his PSC certification, he could be fired for cause.

Section 5 says he can be fired for, “Failure … to obtain, earn, receive, possess, acquire, and maintain in full force all professional certificates and other educational requirements and endorsements required by this agreement and/or the laws, rules and regulations of the board, the Professional Standards Commission, or the State Board of Education or as may reasonably be required hereafter.”

Kelli Young, who works in PSC’s certification division, said, “[Dude’s] certificate lapsed until it was renewed and then it was backdated once we received the paperwork. Educators who are employed must have their renewal requested by the employer so the HR Department for [CSD] requested the renewal.”

So why was the certification allowed to lapse?

“It appears to have lapsed only because the HR Department did not submit the paperwork earlier,” Young said. “They would be the ones to explain why the renewal request was not submitted until 10/27/20. They submit it electronically so we do not speak to anyone.”

Young said this is the only time Dude’s certification has lapsed since he joined the district in 2015. PSC wouldn’t have notified Dude his certificate was about to expire.

“There were no notices sent to the educator,” Young said. “His certificate lists the requirements to renew.”

So how was the lapsed certification brought to CSD’s attention?

“I do not know how they make sure their employees maintain certification,” Young said. “We do not send notifications of expired certification but do have tools HR may utilize to look up educators.”

PSC also is in receipt of a complaint against Dude, but there’s no information about what’s in the complaint or who filed it. . A spokesperson for the PSC said, “No decision has been made regarding whether or not to conduct an investigation.” The PSC could discuss whether to move forward with the complaint at its meeting next month.

It is likely the complaint stems from issues unearthed in Decaturish.com’s reporting.

The reporting looked into allegations that Superintendent David Dude was frequently absent but did not record his absences as vacations. The School Board plans to hire an independent investigator to look into those allegations. The board also has rescinded Dude’s new contract and plans to renegotiate it. Our reporting revealed that the new contract, which would’ve gone into effect July 1, would have made it harder and more expensive to fire Dude.

The School Board held a work session on March 23 but did not address the matter during that meeting. The board held a closed-door executive session before the work session to discuss legal and personnel issues. The School Board has a list of two dozen questions from Decaturish concerning matters related to our investigation. The board promised answers following the March 23 work session, but so far hasn’t provided a response or any indication that a response is forthcoming. The board has been in receipt of those questions since March 15.

It’s not clear if the investigator’s report will be made public, something that the Beacon Hill Black Alliance for Human Rights and the Black Parent Alliance have requested. The School Board has also not responded to questions about whether Dude will be placed on administrative leave pending the outcome of the investigation and whether the board will wait for the investigation to conclude before granting Dude a new contract.

The board’s ability to respond is hampered by a federal lawsuit against the district. David Adams, the school district’s former human resources officer, alleges in the lawsuit that Dude pushed him and former finance Director Susan Hurst out of the district after they raised questions about his time away from the office. They allege he violated of the Code of Ethics for Government Service. Misuse and misreporting of public funds would be a violation of the Georgia Professional Code of Ethics for Educators, according to the lawsuit.

The lawsuit says Dude is required to work 255 days per academic year. However, upon reviewing his contracts, Decaturish was unable to find any language specifying the number of days Dude is required to work or what days he’s entitled to take off without recording it as vacation time. When the School Board announced that it was hiring an independent investigator, the board said Dude does not have to use vacation days during times when the district is closed, like Thanksgiving break. However, the board hasn’t said whether those breaks include the summer months. Evidence shows that during the summer of 2019, Dude was out of the office from June 11 through July 16, 2019.

An auto-responder email sent from Dude’s email account on June 11, 2019 says Dude would return on Tuesday, July 16, 2019. The Temporary Delegation of Authority documents for the summer of 2019 shows that Dude appointed a temporary superintendent from June 14 to July 6, 2019 and from July 7 through July 15, 2019.

But according to vacation requests he entered into the school district’s payroll system, Dude’s only vacation days in the summer of 2019 were on July 12 and July 15.

Public records show Dude received $100,000 in additional compensation for cashing out the vacation days he said he didn’t use. He’s allowed to cash out 30 of his unused days, according to his current contract. Salary schedules posted on the school district’s website show other employees of central office work 225 days a year. The formula for Dude’s vacation pay-outs is based on prevailing daily rate for 251 days.

The Decatur school district currently faces five federal lawsuits filed under Dude’s watch, including the one filed by Adams.

Here is a summary of the other lawsuits filed against the school district:

– Cheryl Nahmias, formerly a Decatur High Instructional Coach/International Baccalaureate Coordinator, filed a lawsuit in federal court on Dec. 23 alleging racial discrimination and retaliation. Her son made a racist video which became public in May 2020. She sued the school district after she was demoted and reassigned to a job within CSD’s central office. She claims the demotion was the culmination of a months’ long campaign of retaliation against her for sticking up for her son’s rights and for years of whistleblowing activities within the district.

– A different Title IX lawsuit against City Schools of Decatur alleges the principals at Renfroe Middle School failed to prevent a sexual assault. The victim’s mother, who is not identified in the complaint, alleges that the student accused of assaulting her daughter had sexually assaulted a different student on campus during school hours two months before her daughter’s assault. The lawsuit says, “Despite having actual knowledge of the earlier sexual assault, Defendants failed to take appropriate remedial and/or preventative steps to prevent [the suspect] from continuing further sexual assaults and groping of other students at RMS, including [the victim], or to otherwise take appropriate steps as mandated by law for the safety and well-being of other RMS students, including but not limited to [the victim].”

–  A former City Schools of Decatur custodian is suing the district in federal court, alleging the district didn’t pay him overtime wages he was owed. His attorney, David Cheng, said his client is seeking $2,400. The custodian, Shutoku Shia, filed the lawsuit in November.