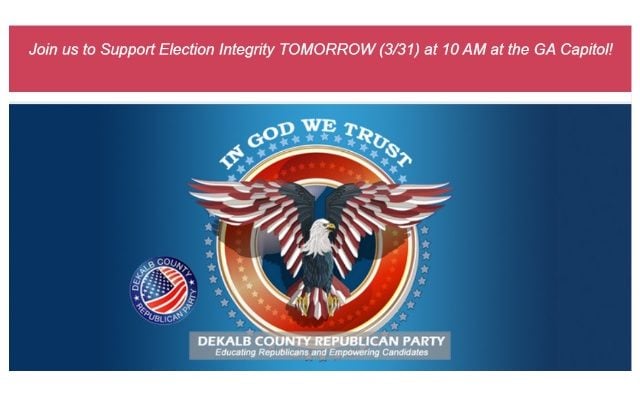 A screenshot of an email sent by the DeKalb County Republican Party.
Share

DeKalb County, GA — The passage of Senate Bill 202, a piece of legislation intended to suppress Democratic voter turnout through various punitive measures, has activated many voters.

There have been protests and fundraising drives aimed as well as court challenges to the new law. But while some are vowing to fight back, the DeKalb County Republican Party is asking the public to show up in support of the legislators who drafted and passed the bill.

“As Democrats continue to push false narratives regarding election law reform, Georgia Republicans are fighting for greater transparency, access, and ballot security,” an email from the party says. “Join us tomorrow, Wednesday, March 31, at 10 a.m. at Liberty Plaza for an election reform rally at Georgia State Capitol! March 31 is Sine Die, the day that all legislation must be passed by the legislature. We want to show our support for our elected officials who have worked so hard to pass SB 202. There will be guest speakers, party officials, and other patriots gathered in support of election law reform.”

The county GOP said, “We look forward to seeing you tomorrow at Liberty Plaza as we rally together in support of election reform in Georgia and thank our legislators for fighting to protect every LEGAL vote!”

The inspiration for those “reforms” came after Democrat Joe Biden won the state’s presidential election and the state sent two Democrats to the U.S. Senate: John Ossoff and Raphael Warnock.

According to Decaturish content partner WABE, “The bill includes a new identification requirement for absentee ballots in place of the controversial signature match policy. It adds new powers for the State Election Board to intervene in county election management. The bill would also strip the statewide-elected Georgia secretary of state of his role as chairman of the State Election Board, replacing him with someone chosen by the Georgia General Assembly.

“Unlike previous proposals, the bill would expand early voting access. It adds absentee ballot drop boxes into the state’s election code with new restrictions on their hours and locations. The measure would ban citizens from handing out food or drink to voters waiting in line at a polling place with the exception of a self-service water option. It would require Georgia’s election administrators to continue counting ballots until finished, without a break. And the bill would cut Georgia’s runoff election period in half, from nine weeks to four weeks.”