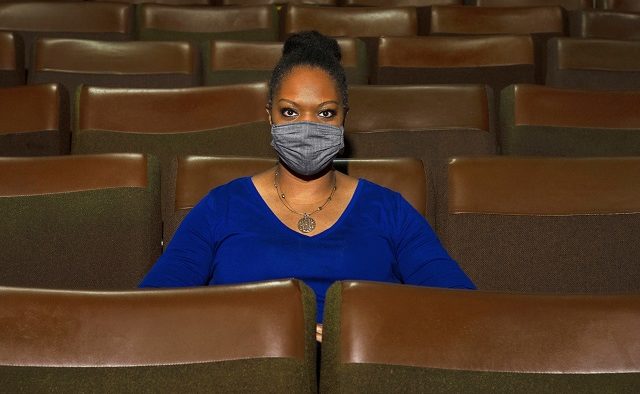 Content warning: This review contains some spoilers and a discussion of rape, suicide, and violence. With warnings, people can be better prepared to read further or choose to forego the content that follows. For a full list of movie reviews on Decaturish, check out https://decaturish.com/category/flicks-with-nicki/.

We’ve all been hurt.

Maybe it was a slight injustice. There was that friend from elementary school who ditched me by the time we got to high school.

Maybe it was serious harm. Some of us have experienced crimes and violence against us that are unimaginable.

We’ve all thought about revenge. We imagined it in our dreams.

In “A Promising Young Woman,” Cassie Thomas (Carey Mulligan) wants revenge against men. She likes to tempt a certain kind of man. Nice men. Handsome men. Good guys with good jobs. She dresses up, covers her face in makeup, slurs her words, and slumps against the bar. She seems drunk and vulnerable, and guys prey upon her. But Cassie is the predator.

When she says she wants to go home, the men coerce. When she says she is tired, the men make excuses. When things start to get physical, Cassie breaks out of her trance. “You’re not drunk?” one guy asks. No. She’s not. We spend the first section of the movie watching the cringe-worthy prank of duping dudes out of one-night stands.

Cassie lives with her parents in a house of audacious cheerfulness. It’s a sort of American Versailles. Pink and gold. Chandeliers and clear plastic over the dining table. She’s in purgatory, and her devilish attitude does not improve when she goes to work at the local coffee shop. She isn’t as promising or as young as she used to be. Her rage is fueled by a tragedy. The film slowly unravels a mystery that we know from the start. Cassie’s best friend Nina was raped during medical school and later dies by suicide. Cassie regrets that she was not with Nina on the night of the assault.

Enter a blast from the past, Ryan (Bo Burnham). He’s a pediatric surgeon. He’s a nice guy. He knew Cassandra from med school, and med school ended in tragedy. So, he’s also a villain. Watching her fall in love is one of the most terrifying parts of the story. “A Promising Young Woman” is a revenge thriller and a slow burn horror movie.

Eventually, her prey shifts to the specific list of people Cassie believes caused Nina’s death when she learns the perpetrator is getting married. Though men are her first target, women are not safe from her vengeance. Madison (Alison Brie) is the beautiful classmate who didn’t believe Nina. Cassie befriends the daughter of the college dean who wouldn’t thoroughly investigate the crime. The slow burn continues. The true villain is silence and complacency.

Carey Mulligan is a phenomenal actor. She devours the screen with her unblinking eyes. Clancy Brown is her father who delivers the compliment “You look beautiful” in a way that underscores his honesty while intonating the sinister nature of such a comment. Laverne Cox, Alfred Molina, and Molly Shannon show varying stages of compassion, guilt, grief, and resilience. The film earned five Academy Awards nominations, including Best Picture, Best Director (Emerald Fennell), and Best Actress for Mulligan. I hope she wins.

“A Promising Young Woman” is a horror movie that doesn’t need to slash to wound us. Not since “Get Out” have mundane things seemed so terrifying. Gyrating men in khaki pants. Spit in a coffee cup. A lunch date with someone you hate. The movie has its moments and the potential was there, but by the end it was not enough to make this a good movie.

We wanted the big confrontation against Al, the guy who hurt Nina. Will Cassandra castrate? Will she kill? Her style is not violence, but humiliation. I wanted feminine retribution. I wanted to see vengeance. The film shies away from grittiness until the very end. The turn of events in the final scenes are supposed to shock us. My shock was how a feminist horror story turned into a tale of male victory. It is one thing to master revenge. It is another thing to let that revenge literally consume you until your last breath. There were many people ready to love Cassie, and we don’t know why one tragedy derailed her from any semblance of normal life. She isn’t capable of violence, but she will not stop fighting. The only person she knows how to hurt is herself.

When a good story culminates, we get the breathless declaration of thanks that Elizabeth Bennett gives Mr. Darcy in “Pride and Prejudice” or the prom scene from “Carrie.” Love or mayhem. Give me something. “A Promising Young Woman” forgot to deliver on its promise to viewers. The story doesn’t need to be wrapped up with a tidy bow, but we do need to see action that is true to characters. Cassie was supposed to be smart, really smart, but she isn’t. Every woman disappoints her. Every man is a villain. She allows herself to be the victim with the dudes in the bar, Ryan, and Al.

I wanted to see Cassie win. She didn’t.

My favorite trigger warning movie is “Three Billboards Outside Ebbing, Missouri” where the sadness and rage are palpable, and mistakes are made. It was beautiful and haunting. I wanted “A Promising Young Woman” to be like that with some laughter. But the joke was on me. I will never rate a movie well where death, by suicide or murder, is considered a victory. It’s not. Grade C-.