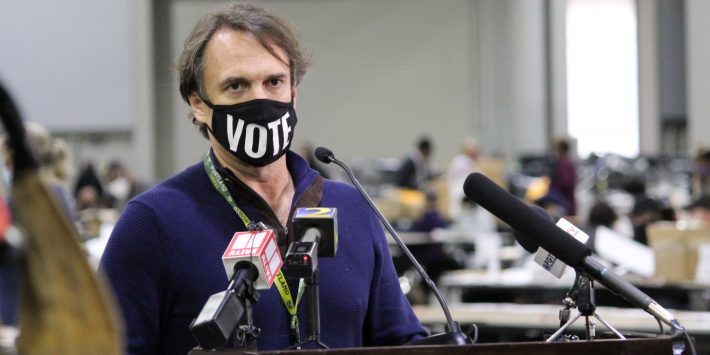 Atlanta, GA — The Fulton County Board of Commissioners has rejected the firing of embattled Elections Director Richard Barron.

The 2020 election cycle was a tumultuous one for Barron and the Fulton County elections department.

The COVID-19 pandemic turned the June primaries into a mess.

By November, the county had rebounded, cutting down lines and eliminating many technical glitches and wait times for absentee ballots. But even then, the county had to deal with an onslaught of unfounded conspiracy theories.

It was all too much for three members of the county’s Board of Registration and Elections who voted in February to relieve Barron of his duties. Democrat Vernetta Nuriddin joined the board’s two Republican members in appearing to oust Barron.

But it was the county attorney’s opinion that the firing had to be ratified by the Board of Commissioners.

Commissioner Natalie Hall, who declined to vote on the measure the first time it came before the board last month, voted Wednesday to keep Barron.

Commissioner Khadijah Abdur-Rahman linked the election board’s decision to terminate Barron to the meritless fraud allegations cited by some Georgia Republicans as a reason to overhaul the way elections are run in the state.

“Voter suppression will not happen on my watch,” said Abdur-Rahman. “If Richard Barron needs to be fired, I would be on board, but I’m not going to go along to get along.”

Abdur-Rahman, Marvin Arrington Jr. and chairman Robb Pitts joined Hall in voting to reject Barron’s firing by the election board.

“They make decisions about the elections, however, about Fulton County employees, they can only make recommendations,” said Arrington. “I am glad that we have this oversight ability, and I hope that we do everything we can to maintain it.”

But Commissioner Bob Ellis says the rejection sets a dangerous precedent of allowing elected officials to decide whether an elections director stays or goes.

“I’m not asking us all to agree with the BRE [Board of Registration and Elections] decision, but instead to recognize that the power of that termination rests with it,” said Ellis.

“I regret terribly that a person who I like – I actually do like Rick Barron –  is put in this position. He doesn’t deserve that,” said Hausmann. “But we should be respecting and affirming the hard decision that the Board of Registration and Election made.”

The current Fulton County Board of Elections will serve through June 30, with the exception of Mary Carole Cooney who resigned last week as chair. She’ll be replaced by former Atlanta City Council member Alex Wan, who was nominated by Commission Chair Robb Pitts and approved by the board Wednesday.

The county’s Republican and Democratic parties can name two members each to the Board of Elections. Their nominations are due by the end of May.