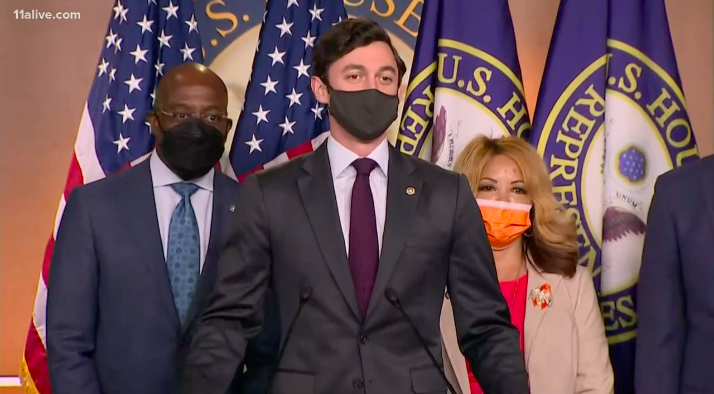 Ossoff: Sen. Jon Ossoff and the Georgia Democratic Congressional delegation hosted a press conference on Wednesday, March 10, to discuss the American Rescue Plan shortly before its passage. The event was live streamed through 11Alive. Screenshot by Zoe Seiler.
Share

Shortly before the 220-211 vote, Georgia Democrats held a press conference Wednesday morning to share their excitement for the bill and explain some features.

“It provides daylight, springtime for the American people. We went through a long winter of an international pandemic, a global pandemic, and this country was hardest hit among countries suffering from this pandemic,” Rep. Hank Johnson said, while pointing out that Georgia was one of the hardest hit states.

The lawmakers also expressed their gratitude to Georgians and said that the passage of the relief bill was due to voters going to the polls in November and January and flipping the state blue.

“I just want to say thank God for Georgia,” Sen. Raphael Warnock said. “The nation is in a very different place than it would be if Georgia had not stood up and made the historic decision to send Jon Ossoff and me to the United States Senate.”

The stimulus checks will go to most Americans, including children and, for the first time, adult dependents. The bill also increases the child tax credit, Ossoff said.

“This bill will invest in vaccine production and supplies so that every single Georgian has access to the COVID-19 vaccine for free by midsummer, if not before,” Ossoff said.

Johnson added that $130 billion in total will go toward schools reopening and $350 billion in total is allocated for state and local governments across the U.S. to ensure front line workers are employed and paid.

Of those total amounts, Georgia is set to receive $4.5 billion to safely reopen public schools and more than $8 billion will go to the state and local governments. The aid will go directly to cities with a population of less than 500,000, Ossoff said.

The three counties in Georgia’s sixth Congressional district will receive $700 million to provide resources for teachers, staff and students for a safe return to classrooms, Rep. Lucy McBath said.

The legislation additionally expands access to safe and reliable child care and rescues the child care system by providing the state with over $1.5 billion through the child care and development block grant for care providers and financial relief for families, Rep. Nikema Williams said.

“The American Rescue Plan includes over $26 million for Georgians and critical funding for head start by providing $1 billion for head start to equip facilities with the resources to safely stay open by PPE, technology and hire more staff, and also ensure families can continue to access quality early learning opportunities that we all know are so vital,” she added.

The American Rescue Plan includes $2 billion for the state to expand Medicaid. Georgia is currently one of 12 states that has not done so. Expanding Medicaid was a focus for Warnock throughout his campaign and it is something he has been advocating for, for years.

“My position has been we could not afford not to expand Medicaid,” Warnock said. “And so I hope that our leadership at the state level will step up now, refuse to leave $2 billion on the table, expand Medicaid and get 500,000 Georgians out of the Medicaid gap.”

Warnock also worked to push forward the Emergency Relief for Farmers of Color Act, as part of the stimulus package, that will provide $5 billion of debt relief to farmers of color.

“One of the things that COVID-19 has done is it has illuminated and exacerbated long standing disparities,” Warnock said. “All of us have been impacted by this pandemic but communities of color have been disproportionately impacted in the amount of death and the amount of debt. So, this portion of the bill addresses that issue.”

Johnson agreed and added that the pandemic has exposed systemic racism in the country.

“It manifested itself in sickness and death of Black and brown people disproportionately and even now with the vaccine roll out, which is bringing the daylight and springtime to America, we’re still on the low side of the numbers of those who have been vaccinated,” Johnson said.

Overall, the stimulus package will greatly help the people of Georgia, Ossoff said.

“This is economic stimulus from the bottom up and the middle out, not from the top down,” Ossoff said. “This is stimulating and recovering economically by getting help directly to working class and middle class people and investing in the public health effort to defeat COVID-19.”