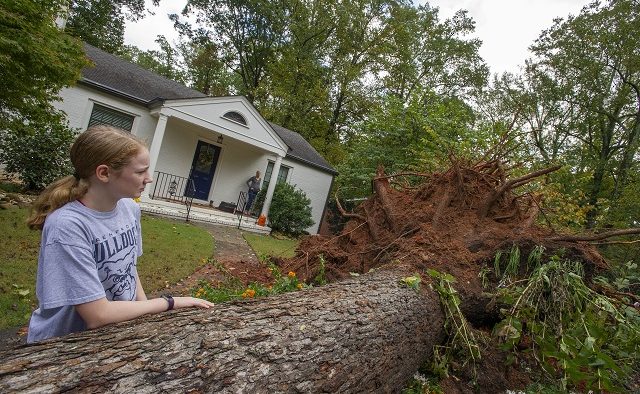 FILE PHOTO USED FOR ILLUSTRATION PURPOSES: Anna Burns, 12, said she had her white noise on and didn’t hear the oak tree that fell just outside her bedroom window at her home on West Parkwood Road in Decatur during the early morning storm on October 29, 2020. The tree took down a power pole but did not damage the home, the car in the driveway, or the family’s prized Japanese Maple in the front yard. Photo by Dean Hesse
Share

Decatur, GA — The National Weather Service is warning the public about the threat of severe storms Wednesday evening, March 17.

“Scattered to numerous strong to severe storms are expected late today through tonight with an approaching strong disturbance and frontal system,” the National Weather Service says. “While there is some potential for severe storms as early as this afternoon, the primary risk will likely be with an area of storms pushing eastward late tonight into Thursday morning. The main threats will be tornadoes (some of which could be significant or longer tracked), damaging winds over 60 mph, large hail, and flash flooding.”

Georgia Power is also warning the public about the possibility of power outages. Remember to check your local media sources, particularly TV and radio, and weather apps for the latest information about the storm as it moves through the area. The city of Decatur sends out weather alerts via the Smart911 app, which you can learn more about by clicking here.

Here’s the full alert from the National Weather Service:

This Hazardous Weather Outlook is for portions of North and Central Georgia.

Areas of dense fog and reduced visibility of a quarter mile or less are expected this morning across north and central Georgia through 11 AM. Dense Fog Advisory is in effect.

Scattered to numerous strong to severe storms are expected late today through tonight with an approaching strong disturbance and frontal system. While there is some potential for severe storms as early as this afternoon, the primary risk will likely be with an area of storms pushing eastward late tonight into Thursday morning. The main threats will be tornadoes (some of which could be significant or longer tracked), damaging winds over 60 mph, large hail, and flash flooding.

.DAYS TWO THROUGH SEVEN…Thursday through Tuesday…

Scattered to numerous strong to severe storms are expected to push eastward across portions of north and central Georgia Thursday morning and likely exiting east central Georgia by Thursday afternoon. The main threats will be tornadoes (some of which could be significant or longer tracked), damaging winds over 60 mph, large hail, and flash flooding.

Spotters should be prepared for activation tonight through Thursday across north and central Georgia. Please relay any information about observed severe weather to the NWS while following all local, state, and CDC guidelines.

* WHAT…Visibility one quarter mile or less in dense fog.

If driving, slow down, use your headlights, and leave plenty of distance ahead of you.

Here’s more information about what you can do to prepare, provided by Georgia Power:

– Before a Storm:  Stay aware and check the weather forecast before heading outdoors. Check your emergency kit, unplug major appliances and charge cell phones in case you lose power.

– During a Storm: Take safe shelter inside a sturdy building away from windows and doors. Avoid contact with conductors of electricity – appliances, metal objects and water.

– After a Storm: Never touch any downed or low-hanging wire, including telephone or TV wires that touch a power line. Never pull tree limbs off of power lines yourself or enter areas with debris or downed trees as downed power lines may be buried in wreckage.

While March, April and May are typically the most active months for severe thunderstorms with lightning, hail and tornadoes, severe weather can happen at any time.Customers can become storm ready by taking the following preparedness actions:

– Get Outage Information – Subscribe to the free Georgia Power Outage Alert service to receive personalized notifications and connect with Georgia Power on Facebook and Twitter for helpful information every day, and restoration updates during severe weather.

– Build an Emergency Kit – A well-built kit should contain enough supplies to get you and your family through three days without electricity or running water.

– Downed Tree Safety – Downed trees are usually the cause of an outage after a storm. Never attempt to pull tree limbs off wires yourself. Customers should call 911 or Georgia Power immediately if they see a fallen or low-hanging power line.

– Generator Safety – Never use generators in an enclosed space. They produce dangerous carbon monoxide that can’t be seen or smelled.

– Storing Food and Medicine in an Outage – During an outage, it’s important to know how to safely store your food and medicine. When an outage occurs, move anything that can be frozen into the freezer. A well-stocked freezer can hold its temperature for 24 to 48 hours.

The company continuously invests in infrastructure to increase the day-to-day reliability of its systems and shorten outage and repair time. The company’s use of Smart Grid technology and increased automation in recent years mean an increased ability to more quickly isolate outages that do occur to smaller numbers of customers and reroute power remotely for improved reliability.

In addition, Georgia Power’s operational plans, systems, infrastructure and generating plants are all designed to enhance the resiliency of the network to best withstand major occurrences, such as severe weather events, including tornadoes, hurricanes and extreme heat or cold. Resiliency investments include upgrading transmission and distribution infrastructure across the power grid, including making power lines more durable.

Georgia Power is the largest electric subsidiary of Southern Company (NYSE: SO), America’s premier energy company. Value, Reliability, Customer Service and Stewardship are the cornerstones of the Company’s promise to 2.6 million customers in all but four of Georgia’s 159 counties. Committed to delivering clean, safe, reliable and affordable energy at rates below the national average, Georgia Power maintains a diverse, innovative generation mix that includes nuclear, coal and natural gas, as well as renewables such as solar, hydroelectric and wind. Georgia Power focuses on delivering world-class service to its customers every day and the Company is recognized by J.D. Power as an industry leader in customer satisfaction. For more information, visit www.GeorgiaPower.com and connect with the Company on Facebook (Facebook.com/GeorgiaPower), Twitter (Twitter.com/GeorgiaPower) and Instagram (Instagram.com/ga_power).