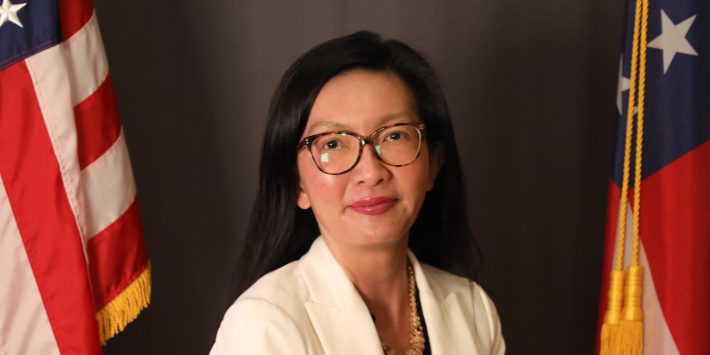 While the investigation into Tuesday's shootings is just beginning, state Sen. Michelle Au said on “Morning Edition” that this event is another in a long history of violence against people of Asian descent in this country. CREDIT GEORGIA GENERAL ASSEMBLY
Share

Atlanta, GA — Georgia state Sen. Michelle Au has long been concerned about the safety of Asian Americans here in Georgia, so much so she went before her fellow lawmakers to speak about it Monday.

On Tuesday, there were a series of shootings at massage spas in and around Atlanta — eight people were killed and six of the victims were Asian women. The shootings have not been ruled a hate crime, with police citing suspect Robert Aaron Long’s statement that he was motivated instead by a sexual addiction.

Au spoke to “Morning Edition” host Lisa Rayam about how she sees this incident in the broader context of an ongoing spike of discrimination against Asian Americans related to misinformation about the coronavirus.

While the investigation into Tuesday’s shootings is just beginning, Au said this event is another in a long history of violence against people of Asian descent in this country.

“I’d like to point out that this latest event on Tuesday, and even the escalating discrimination and violence we have seen over the past year with the development of the coronavirus pandemic, is simply the newest chapter in a very old story,” Au said.

In a statement following the shooting, Au, who is Georgia’s first East Asian state senator, wrote, “we need help, we need protection, and we need people to stand up against hate.”

Au says the history of racism against Asian Americans has long been ignored in this country, in part because of the “model minority” stereotype that depicts Asian Americans as inherently successful.

“When you live as an Asian American in America, there is a sense that regardless of how integrated you are, no matter what you do, how well you speak English, that people will always hold you a little bit at arms distance,” Au said. “There is a sense of perpetual foreignness and otherization that is difficult to overcome.”

Au said increasing awareness is the first step to begin to address this prejudice, and then to gather more data to better measure the problem.

She said she’s speaking out to let Georgians know these incidents do not only happen in places with higher percentages of Asian American residents and that it will take allies in other communities to help stop the violence.

Atlanta, GA — Asian Americans and their allies are calling for solidarity and a push against discrimination and racist violence, after a gunman killed eight people at three Atlanta-area massage spas Tuesday. Most of the victims were women of Asian descent.

Authorities say it’s too early to declare the attacks a hate crime – prompting a debate over when that label should be used, and how to present the gunman’s explanation.

The suspect, Robert Aaron Long, 21, has confessed, according to police, who say that Long denied he was motivated by racial animus. Officials cited sex addiction and a “bad day” as possible explanations for the crime. He is being held in Cherokee County, northwest of Atlanta, where the shooting started.

These articles were provided by Decaturish.com content partner WABE.