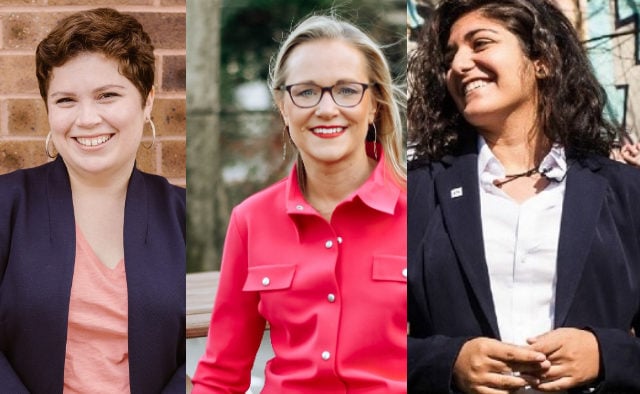 Atlanta, GA — A sustainability expert, a civic activist and a community organizer have all launched campaigns to replace Natalyn Archibong on the Atlanta City Council.

Mandy Mahoney, the former director of sustainability for the city of Atlanta, is joined in the race by Kirkwood Neighbors Organization President Katie Kissel and Liliana Bakhtiari, who came within some 250 votes of beating Archibong in the District 5 race in 2017. Archibong is leaving the seat to run for Atlanta City Council President. District 5 includes East Atlanta, East Lake, Edgewood and Kirkwood.

Bakhtiari is strategic director for the Blue Neighbors Project, a political action committee that supports progressive candidates for the Georgia Legislature. She told Decaturish she’s spent the past four years building relationships with residents, councilmembers, people within Atlanta Public Schools and state officials.

“Because having a functioning democracy means having relationships across the board and solid communication,” she said.

“Our city has the single largest income gap in the country and that is something I absolutely want to fight to narrow or bridge that gap,” she said. “And our streets, sidewalks and water infrastructure are all crumbling and we have a $1.5 billion infrastructure backlog that we absolutely have to be fighting to tackle because it affects everybody’s quality of life.”

But Bakhtiari called affordable housing “one of the single greatest issues our city faces.” She said it’s going to take raising philanthropic dollars to properly address the issue.

“We’re also building at a massive deficit and there’s not enough supply to meet demand, causing rents to skyrocket and pushing seniors out of homes,” she said. “We have to find the balance between single family housing and multi-family housing.”

The city’s ongoing crime issues are due in part to officer retainment issues at the Atlanta Police Department and recidivism.

“We have 300 people that are responsible for nearly half of the crime that’s committed in Atlanta,” she said. “That’s one aspect, but we have to look at root causes of why these issues exist in the first place. That goes to working with our kids and building stronger partnerships.”

“We have one of the largest opportunity gaps between white and Black kids in Atlanta and that’s one of the things we have to tackle to cut into the school-to-prison pipeline,” she added.

Mahoney has been president of the Southeast Energy Efficiency Alliance since 2013. She’s long considered a political run, but it coalesced in 2020.

“I was walking my son to school every day and realized how bad the sidewalks and streets were and I realized now is the time to run,” she said.

Affordable housing will be one of Mahoney’s major campaign issues.

“We also have to look at the level of quality,” she said. “We have substandard housing in Atlanta because of 100 years of policy that has not allowed Black and brown people access to adequate housing.”

Mahoney said public safety needs to be examined on a neighborhood-to-neighborhood scale.

“The issue of the increased homicide rate in Buckhead and is not the same one as the increased rate in East Lake or Brookhaven,” she said. “The amount of manpower needs to be appropriate to the location.”

She would also expand the city’s pre-arrest diversion program.

“I was able to put in place a climate and energy plan that is still in place today,” she said. “That’s still saving money on utility bills.”

Kissel launched her campaign on Wednesday. She’s been president of the Kirkwood Neighbors Organization since January 2020 and is outreach specialist for a marketing agency that connects companies and brands with non-profits.

“As president of KNO as well as my experience working on different non-profit boards, I have seen the nuts and bolts of what makes our cities run and I see where there’s potential for improvement and I think I have the experience and the community connections to help make that happen,” she said.

Kissel’s main campaign issues are income inequality, affordable housing and accessibility, which she said are intertwined.

“The wealth gap that we face leads directly to exasperating the issue of poverty and our housing shortage,” she said.

The demand for housing far outweighs the supply in Atlanta, Kissel said.

“Which means getting creative and making tough choices that might not always please everybody, but will in the long run benefit all citizens of the city by making us a more equitable and accessible city,” she said.

“People know who I am and they trust me. I think a big issue that we find in government, especially in this city, is the lack of trust people have in their government,” she said. “People know me because I’m the person they see dropping my kids off in the school line, at community events, passing flyers out for different organizations.”

Qualifying for the District 5 race takes place in August. The election is in November.