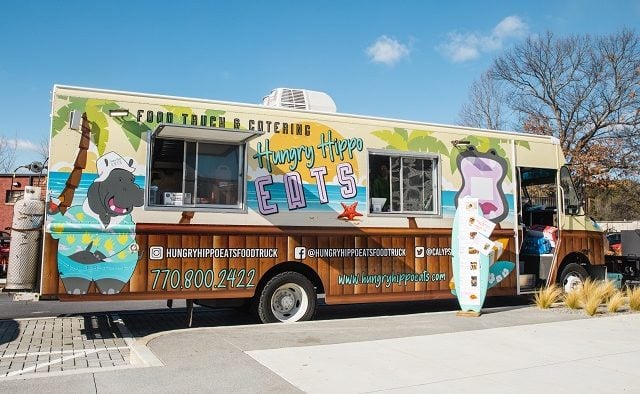 Johny Walker loves to cook and meet new people. He combined those passions in October 2020 when he started the Hungry Hippo Eats food truck to serve Haitian barbecue with a Southern flair. Walker and his wife, Kerri, both cook the food. Photo submitted by Kerri Walker.
Share

Tucker, GA — One Tucker resident has dreamed of opening a food truck and the pandemic proved to be a good time to do so. With his new-found free time, Johny Walker decided to follow his passion for cooking and open Hungry Hippo Eats in October 2020.

But Walker’s wife, Kerri, didn’t know this dream was coming to fruition until the food truck pulled up in their driveway. Her initial reaction was shock and awe.

“But this overwhelming excitement also hit me because this is the man’s dream and he is completely where he’s supposed to be now,” Kerri said. “Like he’s such a great cook and he’s such a people person that being able to combine those two in one career is a dream come true for him.”

“Cooking is in my blood,” he said.

DeKalb County, GA — As DeKalb County Schools plans to welcome back students on March 9, it’s also looking for people to work as substitute and full-time teachers.

In a Facebook post on Feb. 25, the School District said, “DCSD Parents and Guardians, are you interested in Substitute Teacher or Teacher employment opportunities in DeKalb County School District? If you are interested and a qualified college graduate, please complete and submit this survey https://bit.ly/DCSDParentEmployment. We look forward to supporting our parents with their professional job-related goals.”

Tucker, GA — A Tucker resident recently completed his first circumnavigation of the globe, according to his family.

William Roberts completed his trip on Feb. 23 after 95 days at sea.

“He is a Midshipman at the U.S. Merchant Marine Academy in Kings Point, New York, and a Strategic Sealift Officer for the U.S. Naval Reserve,” his family says. “MDN Roberts is pursuing a career goal which has taken him on adventures thousands of miles from home in service to our country.”

Clarkston, GA — Early voting is underway in the special election to fill Yterenickia “YT” Bell’s seat on the Clarkston City Council. The seat became vacant when Bell stepped down to run for mayor.

So far only three ballots have been cast as of about 4:05 p.m. on March 1, according to the DeKalb Voter Registration and Elections Office. The county added that it is normal to see low voter turnout during early voting for a local special election.

Clarkston, GA — During a lively conversation at the Clarkston City Council work session on Tuesday, Feb. 23, the council discussed a request to abandon Wagoner Street.

The city received a formal request from Kathleen Andres and Steve Goff who own 3757 and 3769 Church Street. The request was made “based on hardship caused by the traffic impediment and sanitary problems,” according to the agenda packet.

The two properties run between Church and Rowland Streets and Goff said they are investment properties.

The street was appraised by Atlanta Marketing Data at $5,000 and the city has not received any formal development plans at this time.

DeKalb County, GA — DeKalb County Commissioner Larry Johnson was elected president of the National Association of Counties, which serves about 40,000 elected officials and 3.6 million county employees across the U.S.

“It hasn’t really sunk in, but to be a boy that grew up poor from the southside of Chicago to be in this position, only God can help me to realize this dream,” he told Decaturish and the Tucker Observer.

NACo advocates for county priorities in federal policymaking, promotes successful county policies and educates the public on the workings of county governments. Johnson rose steadily through the group’s leadership in recent years, serving as second vice president in 2019, first vice president in 2020 and now president, which he will take over in July.

Johnson said his ascension to the role helps put DeKalb in the national spotlight.

Stone Mountain, GA — “A lot of people don’t know what Shermantown is, and I think about that a lot,” said Gloria Brown, a lifelong resident of the historic Black neighborhood on the South side of downtown Stone Mountain.

Two signs, one at the city’s Municipal Building parking lot and a granite marker about a half mile south and a block off Main Street point to a tight knit community in the shadow of Stone Mountain rich in history that Brown and other residents hope will not be forgotten.

Stone Mountain, GA — The city of Stone Mountain launched a pandemic relief grant program earlier this month that will steer $250,000 to small businesses and non-profits hit hardest by the COVID-19 pandemic.

“The city is reinvesting in those that took a chance on investing in this city by starting or bring their businesses to our town in the first place,” City Manager ChaQuias Miller-Thornton told The Tucker Observer.

Commercial business owners flooded the application process, with 50 of them requesting $7,500 grants for a total of $375,000 in requested aid. Funding capacity for that group is capped at $150,000.