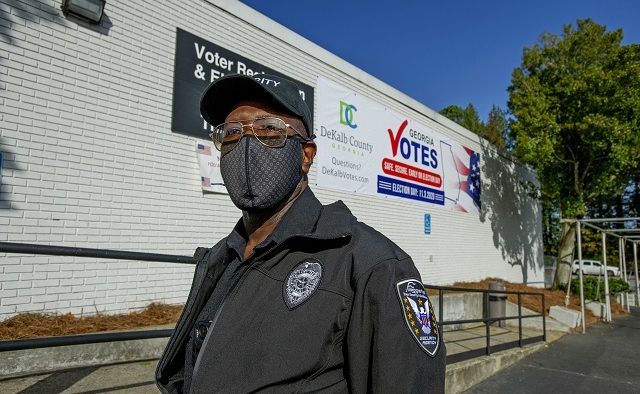 In January, Hall commended the state for “wanting voters to have a good experience during this absolutely unbelievable pandemic election year.”

But with news yesterday that legislators are rolling back voter access, DeKalb County Elections director Erica Hamilton asked her leadership team to review the impacts of the voter law and make staffing recommendations to present to the board. A review of staff, marketing materials and social media will take weeks, said communications director Erik Burton.

“That is a work in progress at this point, but everyone is actively moving towards making the needed shifts,” said Burton, after the DeKalb County Elections board meeting March 26.

There’s just one hitch, according to DeKalb County Elections board chair Sam Tillman. The Board of Commissioners has not yet approved funding for hiring requested prior to SB 202.

Tillman addressed Commissioner Lorraine Cochran Johnson, who was attending the virtual meeting: “We had requested several items in our budget, including some personnel. And it’s my understanding that none of that was approved. Can you speak to that?”

After consulting with COO Zach Williams, Cochran Johnson returned to the meeting. She said a “variety of factors” were holding up the funding approval.

“[The requests] are not taken lightly. And it is my understanding that they will be addressed, but not as a part of a line item in the budget,” Cochran Johnson said. “It was requested that you come back mid-year, after we’ve had more time to evaluate.”

“We will continue to look for ways to ensure that all positions are funded, so I do need everyone to be very aware that a delay is not a denial,” Cochran Johnson said.

Tillman called for board members to take note of the discussion with Cochran Johnson concerning budget requests and approval. “As the commissioners assured us, prior to this most recent election, that whatever this board, this office needed, it was guaranteed to that it would be funded.”

“We go through this on an annual basis. It’s not the first time we’ve been down this road,” he said.

On Sept. 14, DeKalb County Commissioner Mereda Davis Johnson said commissioners are willing to contribute unlimited funds to the Elections Board.

“If we can get at least what Fulton County got, which was $6 million, we would add to the unlimited amount the commissioners are pretty much committing to give to the Board of Elections this election,” she told Elections board members. “You have all the resources to hire whomever needs to be hired.”