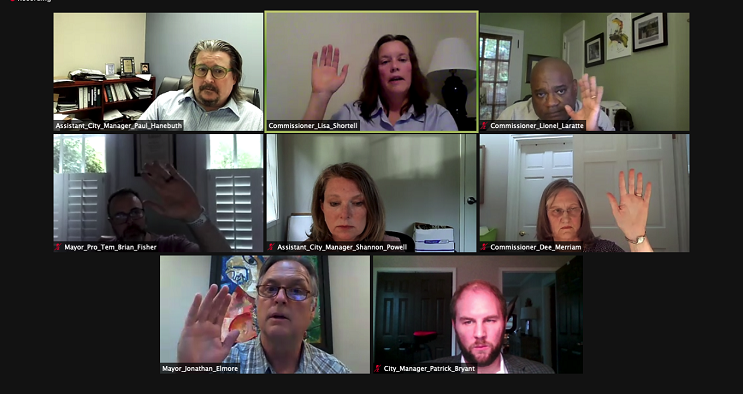 Photo caption: The Avondale Estates City Commission met on Wednesday, April 14, to discuss the city’s stormwater fee, a tree inventory and to discuss who will construct the town green park. Photo by Zoe Seiler.
Share

Avondale Estates, GA — The Avondale Estates City Commission set a new stormwater fee during the regular meeting on Wednesday, April 14. The new fee will be $180, an increase from last year’s fee of $60 per year.

The amount of stormwater revenue currently collected from the $60 fee is not enough to cover annual operation or maintenance of the city’s stormwater system, much less any additional projects the city may want to undertake in the future, City Manager Patrick Bryant said.

Stormwater has been an issue for the city as the infrastructure is aging and hasn’t been properly maintained and the city is planning to undertake stormwater projects. It hired Brown and Caldwell to create a stormwater capital priority plan which identified the top five priority projects and created concept plans.

The increased fee of $180 will provide enough annual revenue for ongoing operations and maintenance, and generate enough revenue to go toward projects to prevent the city from having to borrow money for stormwater needs, Bryant said.

One of the biggest complaints the city receives from residents is that many residents get flooded after significant rainfall. The city recently built a stormwater retention pond behind the that has alleviated some issues, but problems will still arise, Mayor Pro Tem Brian Fisher said.

“We have an aging system but in many areas we have no stormwater infrastructure at all,” Fisher said. “The areas where we do are old and have really not been maintained very much over the years because they were the responsibility of DeKalb County until about 10 years ago.”

“This isn’t a problem that goes away,” Fisher said. “I think it’s one that if we continue to ignore it, it gets worse over time and becomes more expensive.”

Some commissioners agreed that the fee is fair and aligns with other surrounding cities, like Decatur.

Avondale has also not changed their stormwater fee since 2004, which is when the city took over control of its stormwater system, Assistant City Manager Paul Hanebuth said at the March 24 meeting.

“If they had just increased by [the Consumer Price Index] every year then they’d be $85 per unit now instead of $60,” Hanebuth said. “So to get to that same increase we’d be talking about doubling the fees instead of tripling them, if that means anything.”

Over that same period, Decatur’s stormwater fee went from $75 to $100, which is about enough to adjust for CPI. Although Decatur’s fee recently increased from $100 to $285, “so it’s not just us that’s seeing the stormwater expenses coming down the pike and trying to get ahead of them,” Hanebuth previously said.

— In other business, the City Commission also approved a resolution to create a tree inventory with Davey Resource Group. The project is a Geographic Information System based inventory of maintained trees, planting sites and stumps located along streets and in parks, according to the proposal.

Davey Resource Group has estimated there are at least 1,370 trees along streets and about 1,180 trees in parks. For the inventory, the firm will collect data on tree location, species, tree size, condition, maintenance needs, tree risk assessment and rating, further inspection, overhead utilities and the date of inventory, the proposal states.

“In addition to that there is software that comes with this contract that will allow both staff and our residents to interface with each other to share tree information which we believe to be a huge benefit to staff as we try to place priority on which tree issues that we take care of and in what order,” Bryant said.

— During the work session, the City Commission discussed Fabric Developer’s recommendation for the Reeves Young to construct the town green. The project includes the construction of a park and a potential event pavilion that will be located along Highway 278/ North Avondale Road.

The City Commission is also looking to add a fountain to the park and more lighting along Lake Street.

The proposal from Reeves Young has an estimated cost of about $5.7 million.

“We thought that Reeves Young had both the financial resources and they are a licensed utility contractor so that they had, we felt, maybe better control over more aspects in the project,” Jerry Miller of Fabric Developers said. “Another big factor for us was the quality of the past park experiences they’ve had.”

Reeves Young has built several large parks like the Historic Fourth Ward Park on the Beltline, renovations to Centennial Olympic Park and Westside Park in Atlanta.

“We’re happy with the results and we bring in this recommendation with a good deal of confidence that we’ve got the right contractor involved,” Miller said.

The Urban Redevelopment Agency, which is composed of the members of the City Commission, will have to vote on this recommendation on Wednesday, April 28.