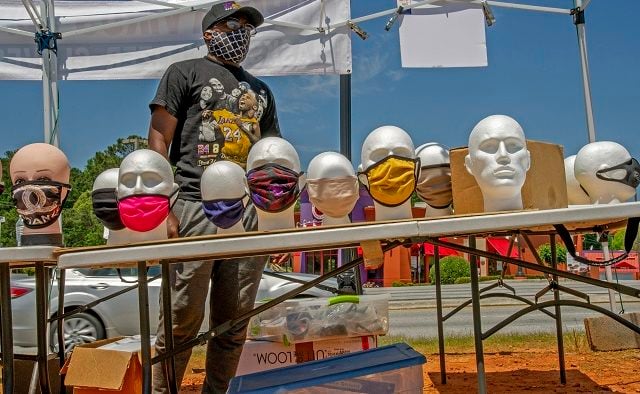 Decatur, GA — The Decatur City Commission voted Monday night to extend its ordinance requiring masks in public as well as the ordinance allowing some off-premises consumption of alcoholic beverages in the city’s commercial districts.

The first ordinance is still needed because public health officials are continuing to recommend social distancing, hand-washing and the wearing of masks to reduce the risk of transmission of the novel coronavirus and local rates of virus transmission are still high, City Manager Andrea Arnold said.

“I understand there is an eagerness in our society to reopen and to push ahead with business as usual. In terms of city decision-making, we are continuing to look at numbers,” she told commissioners. “In some ways, the reopening activities in surrounding areas are not really matching up to what we are seeing. Dekalb is in the highest category for community transmission.”

In addition, the county lags behind local and national rates of vaccination against COVID-19.

DeKalb County’s vaccination rate is currently at 17 percent versus a rate of 26 percent nationwide, Arnold said.

The commission voted unanimously to extend the mask ordinance for another month, until May 17, 2021, when it will again come up for consideration.

Mayor Patti Garrett said that she felt it was appropriate for the city to consider the measure on a month-by-month basis. “By doing this once a month, we remind everyone that it is important and also that we are looking at it regularly.”

Commissioner Kelly Walsh said that with the nation still seeing around 69,000 new cases each day, she felt it important that Decatur continue to model appropriate public health measures.

“I have not heard businesses here asking us to lift the ordinance,” she added. “What we are doing here is important and I am happy to continue it in the near term.”

As a means of helping Decatur restaurants cope with loss of business due to COVID-19, the city voted in April to allow off-premises consumption in commercial districts on Fridays from 4 p.m. to 1 a.m. and Saturdays from 3 p.m. to 1 a..m. Those exceptions are now extended until Sept. 7, 2021, with the city exploring whether they could be made permanent.

-The commission voted unanimously to approve the purchase of the property located at 216 Green Street from Agnes Scott College for $450,000. The parcel is a 1.2-acre wooded lot that is adjacent to the existing PATH Foundation’s Trolley Trail and will be preserved as city greenspace, City Manager Andrea Arnold said.
During discussion of the measure, Commissioner George Dusenbury said that he initially had reservations about the city’s purchase because it would remove a lot that might have supported more housing in the city.

“Because there are wetlands there, and the creek running through it, there is an existing wildlife corridor running through here that is needed in that particular area,” Dusenbury said. “As we densify, it is important to have these places of respite in our city. I am concerned that there will be an expectation by some in Decatur that we should buy other parcels in our city that come up for sale that have more recreational value than this one.”

-The commission also voted 4-1 to approve a project budget of $18,000 and award a contract of $14,925 to CGS Waterproofing to repair the roof of Sheddon Cottage at Legacy Park. The roof of the cottage was damaged when a tree fell on it during a recent storm. Commissioner Dusenbury, who voted against the measure, said he felt that the funds could better be used on a building or facilities that would be of more immediate use to Decatur residents.

City Manager Andrea Arnold said that city staff considered the roof repair to be urgent because the Legacy Decatur board has identified a potential commercial tenant for the building and the cottage faces irreparable damage if the roof is not repaired quickly.

-The commission voted unanimously to appoint Charles E. Bailey to the position of part-time judge for the Decatur Municipal Court. Bailey, who has served as a substitute judge for the court since 2017 will replace Matthew McCoyd who is resigning at the end of the month.