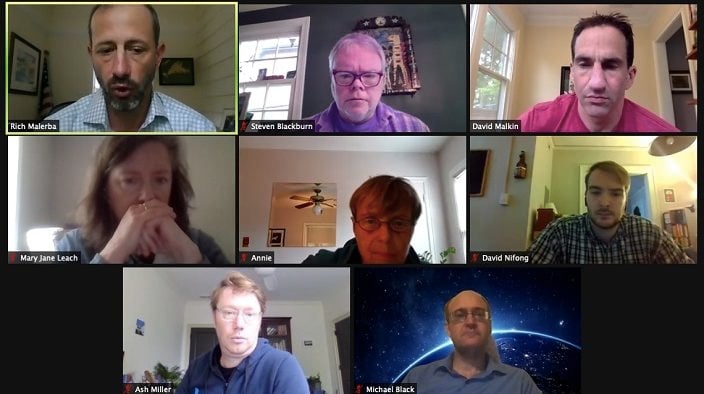 Photo caption: The Decatur Environmental Sustainability Board met on Friday, April 23, via Zoom to discuss the city’s tree ordinance and revisions. Photo by Zoe Seiler.
Share

Decatur, GA — The Decatur Environmental Sustainability Board met on Friday, April 23, to discuss the city’s tree ordinance and the board’s recommended revisions to that ordinance.

The main areas of concern were transparency and measuring the tree canopy. The board also discussed the permitting process for removing trees.

One revision the ESB wants is to increase the city’s canopy goal to a minimum of 63% canopy coverage by 2030 rather than 50%, as stated in a previous proposed draft.

The ordinance also deals with public tree information and says the city arborist must prepare quarterly reports that summarize tree removals, replacement and additional plantings. The Environmental Sustainability Board added that the reports should be made public when produced through an online tree information portal, which should include a tree survey map, a searchable database as well as tree permits, conservation plans and removals.

Trees Atlanta is working on a similar effort with the city of Atlanta to create a reporting line to make sure there is regular reporting, ESB board member Mary Jane Leach said.

“We want to encourage that,” Leach said. “We feel that the transparency needs to be publicly accessible. That would necessitate a portal I would think.”

Leach added that when looking at the 2020 data, she noticed there was information missing that would normally be in the permit “so if we could beef that up, make the database robust, have the reporting start, it just seems that you could take one more step technologically and make that,” she said.

The ESB also added to the section related to alternative compliance to add that all feasible efforts must be made to examine project alternatives to fully comply with the 53% canopy coverage requirement, the draft says.

It additionally states that in no event should alternative compliance or payments to the tree bank result in the on-site canopy falling below 55%, unless all ecological functions of the trees lost can be replaced with other options like bioswales or stormwater solutions.

“It’s an incentive we’re looking to create,” ESB board member Rich Malerba said. “So the incentive is to allow people who aren’t hitting that point an out, and that out is expanding an area we need expansion of which is green infrastructure.”

“If we’re trying to get to, if we can’t have [any] net loss of trees, we need to try to have no net loss of ecosystem benefits,” Leach added.

The Environmental Sustainability Board also wants to add a tree census to the ordinance, which would at minimum identify all current trees within the city, their locations, species, diameter at breast height measurement and other relevant factors as determined by the task force.

The task force will consist of city staff, the city arborist and the tree board.

Additionally, the board added a section regarding tree removal permits laying out the minimum requirements of the application and defined legally permissible needs for tree removal, which include an untreatable diseased or dead tree and if the tree poses an immediate or near-term threat to life or property.

“We’re kind of defining a little bit of what we would expect to see in that type of application,” Malerba said of the tree removal permit. “It’s not meant to be all inclusive but it’s meant to be the minimum for that should be there.”

The city arborist would also be responsible for reviewing all tree removal applications and the draft outlines the factors the arborist must consider, including the reason for removal, the intended use of the site where the tree is located and the function and value of the tree.

The ESB also added criteria that must be satisfied for a tree removal permit and a tree conservation plan.

Conversation continued about the ordinance as the board discussed violations and penalties if someone doesn’t follow the tree ordinance.

The idea proposed in the draft was that in the event a tree is unlawfully removed or disturbed, no certificate of occupancy should be granted by the city for any project for a period of five years from the date of the violation. The provision only relates to the critical root zone of a tree that is potentially removed.

“That is excessive,” ESB board member David Malkin said. “Why wouldn’t you just withhold the certificate of occupancy until the situation is remedied? But to just outright reject granting it for a period of five years seems arbitrary and capricious.”

Ash Miller said the idea came from a draft tree ordinance from the city of Atlanta and that the provision is for when a tree was unlawfully removed and it creates an incentive to not mess up.

“I personally would like to see us get creative with the remediation that’s required in the event this happens,” Malkin said. “If a developer or homeowner does this, what must they do to remedy the situation? I think that’s where we ought to take the discussion rather than just looking at purely punitive, five year restriction on issuance of the CO.”

ESB Chair Michael Black proposed the idea of requiring the planting of a tree that becomes a protected tree.

Malerba would like to see the certificate of occupancy withheld until the canopy requirements are met and a fine paid similar to the fines that were assessed for illegal tree removal based on the diameter at breast height.

Other board members seemed to agree with that idea, although, no final decision was made on what that fee will be.

The Environmental Sustainability Board approved their revisions to the ordinance and will send them to Deputy City Manager Hugh Saxton and Landscape Infrastructure Coordinator Kay Evanovich for further discussion.