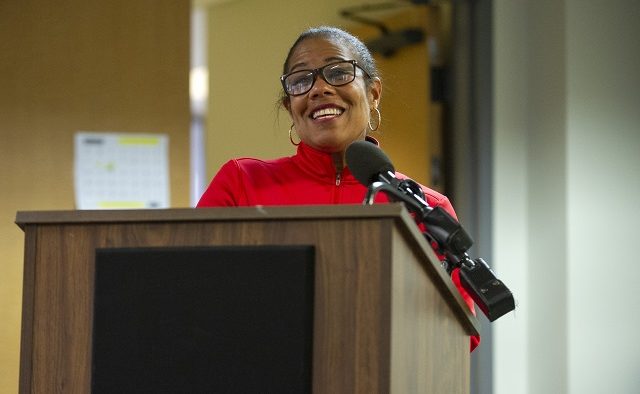 DeKalb County Board of Health District Health Director Sandra Elizabeth Ford, M.D., M.B.A., F.A.A.P., speaks before the first frontline workers with the board of health receive the COVID-19 vaccine at the T. O. Vinson Health Center Auditorium on Winn Way in Decatur on Dec. 31, 2020. Photo by Dean Hesse.
Share

Decatur, GA — Dr. S Elizabeth Ford, district health director with the DeKalb Board of Health, is leaving her post to take a job in President Biden’s administration.

Johnson said, “We’ll miss Dr. Ford in @ItsInDeKalb ! She‘s done a great job at @HealthyDeKalb & worked on behalf of our communities. Now she’s headed to the @WhiteHouse to work for communities across this nation! Join us in wishing Dr. Ford well as she joins the Biden Administration!”

A spokesperson for the Board of Health said, “I can confirm that Dr. Ford accepted a position in the Biden Administration as the Special Assistant to the President for Public Health and Science in the Domestic Policy Council. Her last day with the DeKalb County Board of Heath will be April 23. Dr. Sandra Valenciano will be our interim district health director. She currently serves as the medical director of the Board of Health’s Community Health & Prevention Services (CHAPS) division.”

Ford has held her post in DeKalb County since 2005.

According to the National Association of County and City Health Officials, “A board-certified pediatrician, Dr. Ford has served as the District Health Director and Chief Executive Officer of the DeKalb County Board of Health since February 2005. She manages a diverse array of public health programs that serve over 730,000 people who live in the county, with is part of the metro Atlanta area.”

Here’s some more information about Ford, provided by NACCHO:

Under Dr. Ford’s leadership, the DeKalb County Board of Health has successfully applied for more than $15 million in federal funds to address health disparities, including $5.6 million from the U.S. Department of Health and Human Services (DHHS) to promote smoke-free environments, physical fitness and improved nutrition. More recently the agency received a Minority Youth Violence Prevention: Integrating Public Health and Community Policing Approaches grant from DHHS and the U.S. Department of Justice aimed at curbing violence and improving the health and well-being of underserved and distressed communities. The agency also recently received a Racial and Ethnic Approaches to Community Health (REACH) grant from the U.S. Centers for Disease Control and Prevention.

Dr. Ford was asked to serve as the Acting Director of the Georgia Department of Community Health’s Division of Public Health during the agency’s reorganization in 2008, where she helped to develop statewide policies and legislation and enforce public health laws and regulations. Dr. Ford received a bachelor’s degree in Psychology from Stanford University, a medical degree from Howard University’s College of Medicine and a master’s degree in Business Administration with a concentration in Health Services Administration from Howard University’s Graduate School of Business. She is a fellow of the American Academy of Pediatrics.

Dr. Ford has been a member of NACCHO since 2006 and has served on the Membership Committee for many years, first as a member and currently as its Chair. In 2017, she was elected as an at-large member of NACCHO’s Board of Directors.