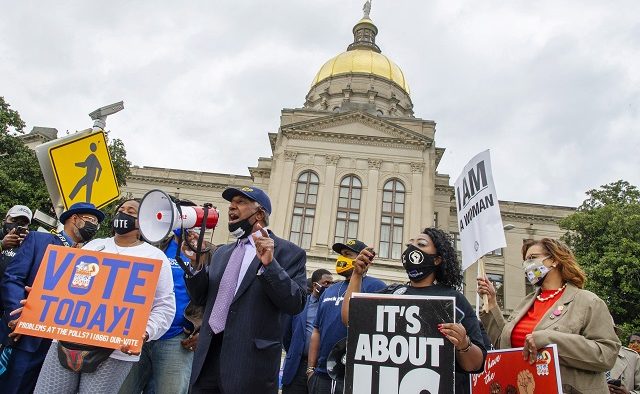 Atlanta NAACP President Richard Rose, with bull horn, speaks during a voting rights protest at Liberty Plaza across from the Georgia State Capitol on Thursday March 25, 2021. “We are not going back to Jim Crow.” Said Rose. “We must raise our voices because silence is consent. We will not be silenced. We are not going back.” Photo by Dean Hesse.
Share

In a last-minute amendment in the final hour of the state’s General Assembly session Wednesday night, the state house passed a bill that would begin collecting fuel taxes in the state, but the state senate did not approve the measure before adjourning.

“[This bill] is purely retaliation for the business community speaking out against a bill that everyone knows is Jim Crow 2.0,” said Democratic State Representative David Wilkerson as the house voted on the change.

After Delta released a statement late last week arguing the legislation “improved considerably” during the legislative process, Bastian took a much stronger tone in a Wednesday memo to employees.

“I need to make it crystal clear that the final bill is unacceptable and does not match Delta’s values,” Bastian said.

“After having time to now fully understand all that is in the bill, coupled with discussions with leaders and employees in the Black community, it’s evident that the bill includes provisions that will make it harder for many underrepresented voters, particularly Black voters, to exercise their constitutional right to elect their representatives. That is wrong.”

“Delta had been at the table in discussions on the bill. They they were a part of a dialogue that we had actually going on for several weeks,” said Republican House Speaker David Ralston about the attempt to undermine the fuel tax break. “And so the statement today kind of came out of the came out of the blue, blue sky. And it was very disappointing.”

“They like our public policy when we’re doing things that benefit them,” he said. “And so they reap the reward of that benefit, and then turn around and do this…you don’t feed a dog that bites your hand.”

Coca-Cola CEO James Quincey joined Bastian on Wednesday in his disapproval of the legislation, calling it “a step backwards. And it does not promote principles we have stood for in Georgia around broad access to voting, around voter convenience, about ensuring election integrity.” He spoke on CNBC Wednesday.

“We have always opposed this legislation, and we have a long track record of working in Georgia, with alliances on our own account with legislators, with stakeholders to improve legislation,” Quincey said.

“The reality is many things are improved and done and achieved in private without having to take a public stand. But in this case, it does not work clearly. And so we’re being more forceful in our public position, even more than we were earlier this week and will continue to advocate for change in Georgia.”

These comments come after calls for boycotts of the companies and public pressure have persisted, even after the bill was signed into law.

“We worked alongside legislative leadership to expand voting opportunities for Georgians, while also taking steps to further secure the ballot box. At no point did Delta share any opposition to expanding early voting, strengthening voter ID measures, increasing the use of secure drop boxes statewide, and making it easier for local election officials to administer elections — which is exactly what this bill does.”

“Today’s statement by Delta CEO Ed Bastian stands in stark contrast to our conversations with the company, ignores the content of the new law, and unfortunately continues to spread the same false attacks being repeated by partisan activists,” Kemp said.

“Delta claimed its leaders engaged with lawmakers drafting these bills for weeks, ensuring that the company’s voice was well-represented in the process. Now, you claim to fully understand the legislation and the damage it will do after conversations with leaders in the Black and Brown community. This is where the problem lies. Conversations with Black and Brown leaders must happen at all stages and all areas of decision-making, not after the damage is done.”

In an interview with WABE on Tuesday, Kemp said conversations with the business community were happening at least daily about the legislation.

“It’s unfortunate. And it’s not fair to be boycotting businesses because of a so-called voter suppression bill that is not in Georgia,” Kemp said.

“This is all part of an agenda to drive a narrative and to pad people’s pocketbooks.”

“As major Georgia businesses and employers, it is imperative that companies like Coca-Cola and Delta speak out against any policy that infringes on the rights of citizens in this state,” said state Rep. Nikema Williams, chair of the Democratic Party of Georgia. “We are glad that they have publicly committed today to being vocal advocates in the ongoing fight to secure and strengthen voting rights — and we know Georgians will hold them accountable.”

Williams and Ufot called on the executives to now turn their focus to lobbying for passage of federal voting rights legislation, including H.R. 1 and H.R. 4.